No ordinary Joe: 76ers thrilled with 2nd round pick 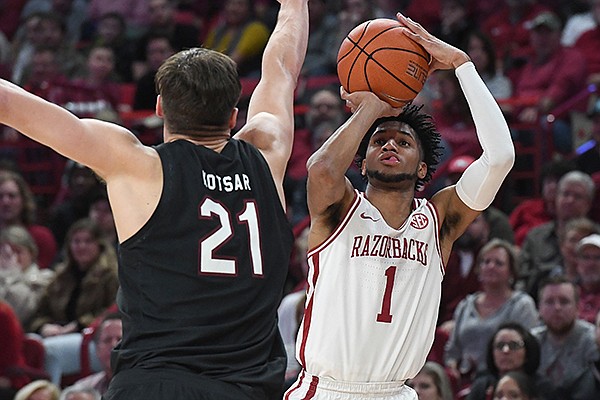 FAYETTEVILLE — After the Philadelphia 76ers selected Isaiah Joe in the second round of Wednesday night’s NBA Draft, a reporter who covers the team referred to the former University of Arkansas standout as a pretty good shooter.

“They’re getting a young player with a lot of upside,” Arkansas Coach Eric Musselman told “The Morning Rush” radio show of the 76ers picking Joe.

Joe’s shooting percentage dipped last season, but he played in some games with a sore right knee before undergoing surgery.

The NCAA also had a deeper three-point line last season, and Joe didn’t have the benefit of a teammate with a strong inside presence as he did with Daniel Gafford two years ago.

The 6-11 Gafford was a first-team All-SEC pick and was a second-round selection in the 2019 NBA Draft by Chicago. Last season the Razorbacks’ tallest starter in most games was 6-6 Adrio Bailey and they usually started four guards and sometimes played five.

“Isaiah Joe’s not too complicated,” Morey said. “He’s just one of these elite shooters coming out of college. A little more defensive potential in our mind than what people give him credit for. That’s not what he’s going to hang his hat on, but the shooting is truly elite, and we felt like he was a great bet.”

Mike Conley Sr., the former Arkansas track and field star who is Joe’s agent, said the 76ers — who picked Joe No. 49 overall — are a good fit for him.

“They’re looking for shooters,” Conley Sr. said. “So Isaiah is definitely what they want.”

Morey, Houston’s general manager the previous 13 years, is looking to remake Philadelphia into a better shooting team to complement the talents of point guard Ben Simmons and center Joel Embiid after the team went 43-30 last season and suffered a four-game sweep by Boston in the first round of the playoffs.

Before drafting Joe, the 76ers picked Kentucky guard Tyrese Maxey in the first round, then traded the 34th pick and Al Horford along with a first-round pick in 2025 to Oklahoma City for Danny Green and Seth Ferguson and then sent the 36th pick and Josh Richardson to Dallas for Seth Curry.

Curry and Green also are known for their perimeter shooting.

“I feel like they really stressed the need for shooters,” Joe told Philadelphia media. “That’s why they picked me at 49.

“They really value my skillset. I’ll be able to stretch the floor with my shooting ability. Ben Simmons is a willing passer and very capable of it and so I’m there for any kick-outs that he needs when he’s driving the lane.

“If he drives on my side, I can occupy the defender, and that gives him a nice lane to the basket.”

Joe said his shooting also can help free up space inside for Embiid.

“It kind of opens up the lane for him now that I’m out there,” Joe said. “If my man helps, the inside-out game will work because Joel is a very skilled player.

“He can score around the basket, the mid-range, and he can pass. I feel like our games will complement each other in a great way.”

Musselman was an NBA head coach at Golden State and Sacramento as well as an assistant for Orlando, Atlanta and Memphis.

There were media reports in recent days leading into the draft that Philadelphia had promised Joe it would pick him.

“Philly didn’t guarantee anything,” Conley Sr. said. “None of that stuff is ever absolute. But it was pretty clear that if Philly had a chance, they were going to get him.”

“But then those picks were involved in trades,” Conley Sr. said. “So I thought Isaiah would go a little bit higher than he did.

“When it got past 36, and Isaiah hadn’t been drafted yet, things got a little crazy. A lot of teams were calling. I was on the phone with six teams, almost all at the same time.

“But in the end, it still worked out for Philly to pick him.”

Joe was on media Zoom call when he got a call from 76ers General Manager Elton Brand and Coach Doc Rivers.

Derrick Joe, Isaiah’s father, answered the call and explained his son was doing an interview.

“It was really funny,” Conley Sr. said. “Isaiah wasn’t quite sure what to do, and then Doc got on the phone and said, ‘Oh, man, interrupt that interview. Tell him his coach wants to congratulate him.’ ”

Joe then spoke briefly to Rivers, who welcomed him to the 76ers.

“Thanks for taking a chance on me,” Joe said.

Rivers then asked Joe if he’s ready to be a pro.

Conley Sr. said Joe probably will leave Arkansas for Philadelphia after Thanksgiving to get ready for training camp, which is scheduled to begin Dec. 1 with the season opening on Dec. 22.

“I know Isaiah’s excited and happy — and relieved — that the draft is over,” Conley Sr. said. “Now he’s looking forward to proving himself.”