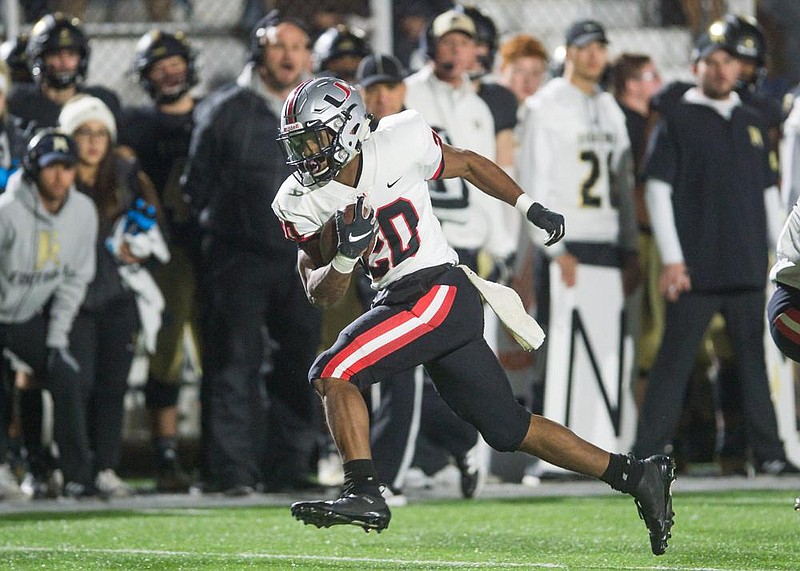 University of Arkansas linebacker commitment Christopher “Pooh” Paul Jr. played assignment football in helping his team to a 24-7 victory over Macon Central, who was previously undefeated in region play.

Thomas, who’s being recruited as an athlete by the Red Wolves, was held to 128 yards of total offense while playing quarterback.

“Chris was tasked with spying the quarterback Friday night,” Crisp County Coach Brad Harber said. “The quarterback by the way, is one of the best dual-threat quarterbacks in our region. Chris did a fantastic job all night long on ‘D’, and then had a great game at tight end and running back on offense.”

Paul had 6 tackles, 4 tackles for loss and harassed Thomas with 7 quarterback hurries. He also had a carry for 12 yards.

“The defensive line was getting quality rush on the quarterback, forcing him to either step up in the pocket, or take off running,” Harber said. “That’s where ‘Pooh’ had to be very disciplined. He was responsible for that guy wherever he ran.”

For the season, Paul has 82 tackles, 22 tackles for loss, 13 quarterback hurries, 1 forced fumble, 1 recovered fumble and 1 pass breakup. Offensively, he has 2 carries for 18 yards, 1 touchdown and 3 catches for 51 yards and a touchdown along with 2 two-point conversions.

Paul, who chose the Hogs over more than 24 scholarship offers from Tennessee, Louisville, Nebraska, TCU and others, plans to sign with Arkansas on Dec. 16 and enroll in January.

Arkansas running back commitment AJ Green likely would’ve set a school record had last week’s game not got out of hand.

The school record for touchdowns in a game for an individual is seven.

“Not bad for only playing a half,” Tulsa Union Coach Kirk Fridrich said. “You know he’s having a good game when you start asking what the record is?”

Green, who chose the Hogs over Texas, Baylor, LSU, Michigan, Oklahoma, and others, recorded a wind-aided 10.38 seconds in the 100-meter dash at the Class 6A state meet as a freshman.