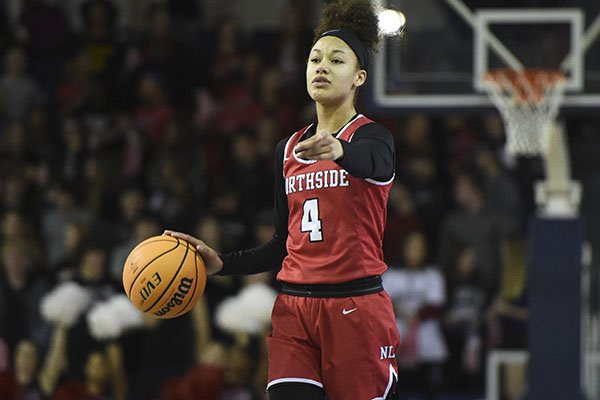 FAYETTEVILLE — Mike Neighbors believes his University of Arkansas women’s basketball team is ahead of schedule as he begins his fourth season, but the Razorbacks were right on time to get Fort Smith Northside standout Jersey Wolfenbarger to sign a national letter of intent a week ago.

Arkansas has produced some outstanding talent over the years, but some of that talent chose to leave the state to play at national powers such as Connecticut or Tennessee.

It’s hard to put into words the potential impact Wolfenbarger, ranked No. 7 in the country in her class by ESPN, could have on the Razorbacks’ program, Neighbors said.

“Obviously, that’s the kid who has escaped us in the past,” Neighbors said. “It was important for us to be good enough at the right time. For her to say yes, I don’t think enough can be said or written about it.

“Arkansas gets one about every 10 years, one that everybody in the country wants.”

OVERSET FOLLOWS:Arkansas has earned preseason attention, being ranked No. 14 in the USA Today Coaches Poll, which was released Thursday. The Razorbacks, who open the season by hosting Oral Roberts at 11 a.m. Wednesday in Walton Arena, were also ranked 14th in The Associated Press preseason poll. That’s the highest preseason ranking for the program which was ranked No. 10 in 1995.

The Razorbacks have grown in Neighbors’ first three seasons — going from 13 victories in Year 1 to 24 last season. They can also wonder about what might have been last year after the covid-19 pandemic shut down the sport when Arkansas was all but assured an NCAA Tournament bid.

Wolfenbarger has also experienced a growth spurt during those same three years, starting at 5-foot-9 as a freshman at Northside. She’s now nearly 6-6 starting her senior season.

That makes her truly unique, Neighbors said. He compared to Wolfenbarger to men’s players Anthony Davis and Kevin Durant, who also had huge growth spurts in high school. But there’s one thing that makes her different: She’s still playing guard.

“She’s the type of kid that avalanches things.”

Wolfenbarger was the linchpin of the signing class of four, but the other three all committed before she did. Forward Emrie Ellis is rated as a top-50 player in the class, while guards Ashlyn Sage and Samara Spencer were rated among the top 75 by one service.

Ellis, a 6-3 shot-blocker from Ada, Okla., played on the same summer league team as Razorbacks freshman Rylee Langerman and Sage.

The relationships he and his coaching staff have established over the years was key in getting those recruits, Neighbors said.

“Our former assistant Lacey Goldwire heard about Emrie from a college classmate,” Neighbors said. “She’s a kid who didn’t play as much on the summer circuit. She broke her wrist three minutes into the summer season one year and then chose to go to church camp and then the next year committed to us.

“Now you see a 6-3 kid who shoots threes, runs the floor and blocks shots. She blocked 22 shots in a game I went and watched last year and I did the stats. She could be a double-double type kid for us.”

Sage got Neighbors’ attention when he went to watch Langerman. Her name had also been given to him by a former high school teammate, who lives in the area.

“First time I saw her, she’s this spindly 6-1 wing, played her guts out, now she’s a 6-3 shooter with unlimited range and now with added size and strength is a good rebounder and can guard multiple positions,” Neighbors said.

Spencer was different, being from Florida, but a relationship with the coaches of her summer team paid off, Neighbors said.

“We don’t normally target Florida as an area to hit because there so many other SEC schools between here and there,” Neighbors said. “Her summer coach reached out to us. We’ve known them for 20 years and we’ve never signed one of their players in 20 years. But they said, ‘Hey, coach, this is your type of kid.’

“She’s a slasher type out on the wing, SEC body, SEC athlete that shoots it and she’s rare.”