After 3 weeks off, rested LSU takes Boot back to bayou 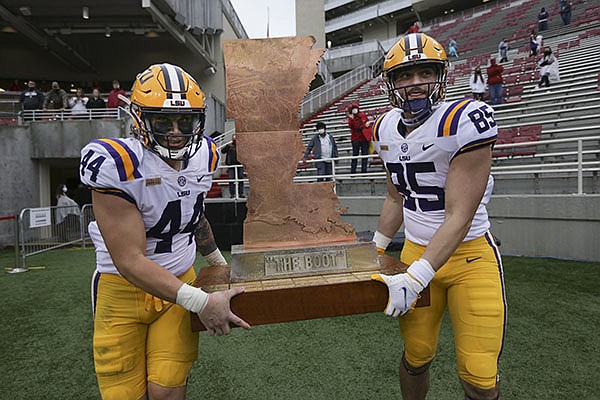 FAYETTEVILLE — The Boot is going back to the bayou.

Jay Ward blocked what would have been a game-tying field goal with 1:24 left and LSU edged Arkansas 27-24 on Saturday at Reynolds Razorback Stadium.

The Tigers (3-3) had not played in three weeks due to covid-19 concerns and a bye, but escaped with their fifth straight win in the series.

“Tremendous win for our football team,” LSU coach Ed Orgeron said. “I give the players credit. At the beginning of the week, we had some phenomenal practices, great leadership. Give coaches the credit. A tremendous job of coaching the whole week.”

Arkansas (3-5) only had 56 scholarships available for the game with six defensive linemen among those unable to play.

“I think this is different Arkansas team under Sam Pittman,” Orgeron said. “A very well-coached football team, a very well-disciplined football team. That had athletes on both sides. it came down to making a play at end and we did.

“I’m just happy for this football team. We needed this one.”

The Tigers took the lead when true freshman quarterback TJ Finley hit Jeray Jenkins for a 13-yard touchdown with 3:59 left remaining that proved to be the game-winning points.

Arkansas moved from its 25 to LSU’s 27 before having to settle for AJ Reed’s 44-yard field goal attempt that was blocked.

Ward, who had been victimized by Arkansas wide receivers on a pair of long pass plays, came off the edge and got a hand on the football to save the win.

“I was, 'Just block it. Block it or miss it,’” Orgeron said. “We needed a break. These guys fought hard and we finally got a break. This was a big win for our football team.

“Jay is a tough young man. You are going to play like you practice. On our field goal practice, Jay is always around that corner making plays. I am just happy for that young man.”

LSU had the ball for more than 41 minutes, ran 91 plays to Arkansas’ 53 and did not allow a third-down conversion in 10 attempts by the Razorbacks.

Zach Von Rosenberg, a 30-year-old punter who had a stint as a minor league baseball player, made sure every Arkansas second-half possession except the last one started inside its own 10.

“I think the biggest thing, if you guys didn’t already know, was the time of possession,” Orgeron said. “Forty-one minutes we had the football and that allowed us to keep our defense fresh.

“I thought Zach Von Rosenberg kept pinning them deep and they were 0-of-10 on third down. It was a phenomenal job and then we made the big plays as the end.”

“He’s got ice in his veins and he has got a lot of confidence,” Orgeron said of Finley. “He practices that way. He has a strong arm, a big body, he is confident, he can handle the rush and scramble. There are some things when the play is going fast that he has to key and diagnose a little bit better, but overall I thought he showed he could win a big game at the end.”

Arkansas had a 443-419 total offense advantage, but LSU held the Razorbacks to 104 rushing yards on 27 attempts.

“We wanted to run the football, wanted it to be manageable third downs, short, decent throws, take the shots when we could,” Orgeron said. “We thought we had some chances, but we missed some shots. We put the ball in our playmakers' hands.

“Arkansas has a good run game, but we stopped the run game and made them one dimensional.”

LSU's defense had been historically bad coming in, but got just enough done against Arkansas.

“I thought (defensive coordinator) Bo Pelini did a great job,” Orgeron said. “Now we gave up some deep balls, but lost our two starting cornerbacks. The next guys stepped up. Obviously we have got to better one-on-one coverage deep. I thought we stopped the run.”

Arkansas only had three drives of over four plays in the game, but a six-play, 95-yard touchdown drive that ended in Trelon Smith's 1-yard scoring run gave the Razorbacks a 21-20 lead with 1:04 left in the third quarter.

“They said, 'We are going to win. We got this coach,'" Orgeron said. "Everybody stuck together, stayed in the game the whole time. The coaches stuck together. You could just feel that the whole week. Hopefully that is the way things or going to be from now on. If it is, we can build on that.”

Linebacker Jabril Cox, a graduate transfer from North Dakota State, had an interception during the game.

“We had a bad taste in our mouth from our last game,” Cox said of a 48-11 loss at Auburn on Halloween. “It’s been three weeks since we were able to get an opponent so we just knew we had to fight to the end, regardless of people going down. We believed the in the next player up and we continued to fight.

Oregon believes his team got better during its layoff.

“I think during the three weeks of practice that our guys improved,” Orgeron said. “We didn’t play many defenses, didn’t have many checks. I thought our guys had their heads in the game and played well. We probably had less mental errors today than we did all year and that was big.”