Offense goes from hammer down to slow down 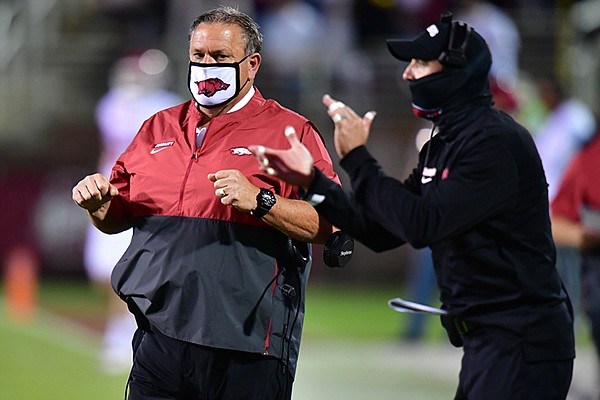 Seems for both Arkansas’ former head coach and Arkansas first-year Coach Sam Pittman’s play-calling offensive coordinator that the faster they operated their offense the faster they were punting their team’s overworked defense back to the field.

Morris’ “Hammer Down” ambitions inevitably slowed during the realities of two 2-10, 2-10 overall seasons with an SEC combined record of 0-16.

Pittman and Briles never endorsed all uptempo all the time.

With it nearly all defense keeping the Hogs up 10-5 midway through the third quarter of the season opener that Georgia’s renowned defense ultimately dominated, 37-10, Pittman the next week was asked: Why try much uptempo period?

You can’t improve it without the patience to keep trying it.

Running back Trelon Smith was asked what’s the uptempo difference?

“Oh, man. I’d say practice,” Smith said. “Practice makes perfect. We started off slow early in the season mainly due to having a new offensive coaching staff and new offensive playbook and (not) getting the first first down. To get that first first down we were able to tempo which fatigues defenses. Man, we are doing way better now! The line is blocking better. The receivers are blocking on the outside better. Holes are starting to be created.”

“I don’t think we’re hurting ourselves as much as we did early in the year with alignments,” Pittman said. “I’m talking about pre-snap stuff, where we were having to flip a back or get a wideout on, or a wideout off. Maybe our splits weren’t correct. I think the quarterback has had to spend less time making sure everybody on the offense is aligned right where now he can look at the defense and have some things that are important to him pre-snap for his success. I think all those things together have helped us.”

“Certainly when we get into our tempo, we’ve played really well,” Pittman said.

“The team’s bought into, ‘Listen, we can’t really get into that until we get the first first down.’ After we get our first first down a lot of times you’ll see us have really good success as long as we stay penalty free.”