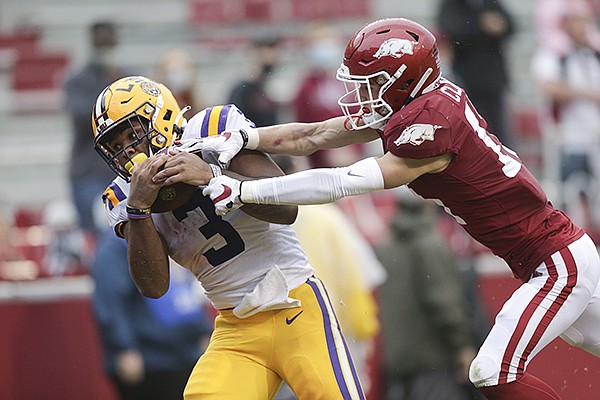 LSU running back Tyrion Davis-Price (3) attempts to catch a pass as Arkansas cornerback Hudson Clark defends during a game Saturday, Nov. 21, 2020, in Fayetteville.

FAYETTEVILLE — Refreshed LSU’s crafty game plan, a controversial targeting penalty on Jalen Catalon and a tipped field goal try were the defining moments in the Battle for the Golden Boot on Saturday.

The Tigers executed their ball-control plan for freshman quarterback TJ Finley on offense  to take advantage of the Razorbacks’ covid-19-depleted defensive front to outlast Arkansas 27-24 before a crowd of 16,500 at Reynolds Razorback Stadium.

LSU cornerback Jay Ward went from goat — for allowing a couple of big-play shots to Mike Woods — to late-game hero. Ward broke up a third-down swing pass to Trelon Smith on Arkansas’ final possession at the LSU 27, then the sophomore deflected A.J. Reed’s potential game-tying 44-yard field goal try with 1:24 remaining to seal the win.

LSU claimed the Golden Boot trophy for the fifth consecutive year and kept alive its streak of not losing back-to-back games under fifth-year Coach Ed Orgeron, who improved to 5-0 against Arkansas with the Tigers.

“Tremendous win for our football team,” Orgeron said. “It came down to the final play, and we did it.”

“LSU had the ball the whole time,” Pittman said. “They probably looked out there and saw some new faces on the D-line and felt like they could possibly have a good running game on us, which they did.”

Arkansas had a succession of big-play strikes from Feleipe Franks to Woods, Treylon Burks and T.J. Hammonds to stay in the game, but the Tigers won the time of possession by more than a 2-to-1 margin (41:43-18:17) and outrushed the Hogs 148-104.

“We couldn’t hand the ball off to the tailback and run the ball very well,” Pittman said. “The bottom line is probably they could run it and we couldn’t.”

Arkansas fans were incensed over a targeting penalty in the fourth quarter against Catalon, the ace safety, who turned his body and essentially hip-checked defenseless LSU receiver Kayshon Boutte after a 14-yard catch with about seven minutes remaining. LSU took advantage of the extra 15 yards and Catalon’s absence to score the go-ahead touchdown with 3:59 remaining on Finley’s 13-yard strike to Kayshon Boutte.

“I thought he tried to avoid the hit,” Pittman said of Catalon. “He was coming in with his shoulder. I felt like he was trying to avoid the contact, but I can see what they saw as well.”

Arkansas Athletic Director Hunter Yurachek posted his dissatisfaction with Catalon’s ejection by writing on social media, “I cannot change the outcome or any of the other missed calls, but I will work with the appropriate SEC officials to make sure that this ‘targeting’ call does not cost Jalen Catalon our next game.”

The SEC office did not respond to a request for comment on the Catalon play or a first-half LSU fumble that was judged not to have a clear recovery, though Arkansas safety Joe Foucha came out of the pile with the ball.

Arkansas’ sputtering run game and inability to convert on third down proved critical.

“We’ve got to be better on third downs and being able to stay on the field,” Franks said. “I mean, the time of possession would kind of explain it. Staying on the field I think is super important for this offense, gives us more opportunities.”

Franks completed 17 of 26 passes for 339 yards and 1 touchdown, and he also had his first scoring run of the year on a 10-yard keeper.

However, Franks also threw his first interception since Oct. 17, when linebacker Jabril Cox picked him off over the middle in the second quarter. Cox returned the interception 36 yards to the Arkansas 1, setting up Tyrion Davis-Price’s touchdown on the next play for a 17-7 LSU lead.

Finley, making his third start for the injured Myles Brennan, improved to 2-1. The 6-6, 242-pounder completed 27 of 42 passes for 271 yards and 2 touchdowns. Davis-Price ran for 104 yards and a touchdown to lead the LSU running game.

“I hate losing,” Davis-Price said. “It was time for us to get that feeling out of us.”

LSU had first-down success with read-option runs between the tackles, which helped give the Tigers manageable third downs.

Franks hit Burks with a 65-yard catch-and-run touchdown late in the first quarter to give Arkansas a 7-3 lead, its first in the series since upsetting the Tigers 31-14 in Baton Rouge in 2015.

Trailing 17-7 late in the second quarter, Franks found Woods for a 50-yard gain over Ward down the right sideline. Franks’ keeper capped that 75-yard drive and tightened the score to 17-14.

Arkansas started its first three second-half possessions inside its 10-yard line. The Razorbacks got out of the deep hole on the last two of those, thanks to a drive-starting 29-yard strike to Woods, followed by his 50-yard catch. A 51-yard throw to Hammonds aided the second drive.

Trelon Smith’s 1-yard touchdown run with 1:04 left in the third quarter gave the Hogs a 21-20 lead. After forcing a three-and-out series from the Tigers, the Razorbacks had a chance to get further separation on their next possession.

Hammonds’ long catch took Arkansas from its 8 to the LSU 41 on the final play of the third quarter. Two plays later, Hammonds navigated 29 yards over the left side to reach the Tigers’ 6. However, heavy rain moved in just about that time and Franks slipped on a third-down keeper.

Reed’s 22-yard field goal made it 24-20, giving the Tigers a chance to take the lead with their late touchdown.