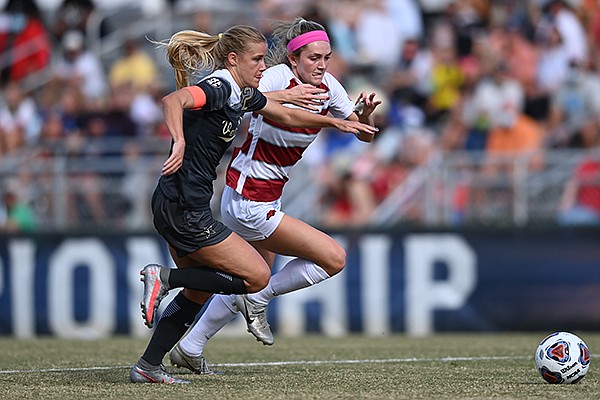 Photo by Eric Glemser, via SEC

Vanderbilt's Ella Shamburger (left) and Arkansas' Parker Goins race for a ball during the championship game of the SEC Soccer Tournament on Sunday, Nov. 22, 2020, in Orange Beach, Ala.

That was the Razorbacks’ high point, though. They didn’t score again and lost 3-1 to Vanderbilt at the Orange Beach (Ala.) Sportsplex.

Arkansas (9-2) lost in the tournament championship for the fifth consecutive season to a fifth different opponent. The Razorbacks have been the tournament’s top seed the past two seasons.

“I’m proud of the team and the season,” Arkansas coach Colby Hale said. “Losing stinks. We ran into a little bit of bad luck and a team playing real well. The players are really gutted and I understand.

“I’m proud of them. Making it to finals isn’t easy and there are some programs that haven’t been to one. I’m happy with the consistency to win two straight (regular-season) championships.”

Vanderbilt (8-4) completed a four-game run that might go down as the best in tournament history. The Commodores defeated the tournament’s top three seeds — Arkansas, Tennessee and Texas A&M — by two goals apiece and scored a tournament-record 14 goals.

Only LSU in 2018 had won the tournament with four victories. All other winning teams had first-round byes.

"I'm proud of how we played all week,” Vanderbilt coach Darren Ambrose said in a school release. “We've been the best that I've seen any of my teams play here consistently here for a while and they just put themselves on a mission and executed everything we asked them to do, and they thoroughly deserve to be where they are today."

Sunday’s championship game began with a flurry of goals. Kayla McKeon scored in the first minute to put the Razorbacks ahead 1-0, but the Commodores countered with goals in the third and fifth minutes to take the lead.

Arkansas’ Haley VanFossen was called for a penalty against Vanderbilt’s Haley Hopkins in the 18-yard box, and the Commodores’ Kimya Raietparvar made the ensuing penalty kick to tie the game 1-1 less than two minutes following McKeon’s goal.

Vanderbilt took a 2-1 lead two minutes later on a header by Reagan Kelley off a cross from Leila Azari.

“We just lot momentum a little bit,” Hale said. “They’re a good team and they took advantage of a couple mistakes. I thought we were going to fight back. We had a couple of more chances and didn’t get it, and ran out of steam at the end.”

The Commodores extended their lead to 3-1 in the 54th minute when Abi Brighton drilled a kick from 20-plus yards over the top of the Razorbacks’ goalkeeper, Taylor Beitz.

Arkansas struggled when it possessed the ball, but had multiple chances to put more goals on the board. Raietparvar kicked away McKeon’s look at an open net in the first half, and Anna Podojil had a couple of one-on-one looks saved by Vanderbilt goalkeeper Sarah Fuller after halftime.

“We definitely had chances,” Hale said. “Soccer’s kind of a funny game. They didn’t go in for us today.”

Fuller had three saves. Vanderbilt out-shot Arkansas 14-9, including 7-5 on goal. The Commodores also limited the Razorbacks to two corner kicks. Arkansas averaged 6.4 corners per game and was one of the SEC’s most efficient teams on set pieces.

Vanderbilt won the SEC Tournament for the third time, including for the second time over Arkansas. The Commodores defeated the Razorbacks in the championship of the SEC’s first soccer tournament in 1993.

“It’s been different every year,” said Hale, who has coached in five of Arkansas’ championship game losses. “We’ll have to go back and evaluate and see what can we do as better as coaches. Is there something we’re doing that we need to look at?

“At this point my initial thought is it’s probably just different circumstances.”

Hale said the Razorbacks might play up to 10 games during a spring season leading up to the NCAA Tournament.