Without Joe, Arkansas flies under national radar in 2020-21 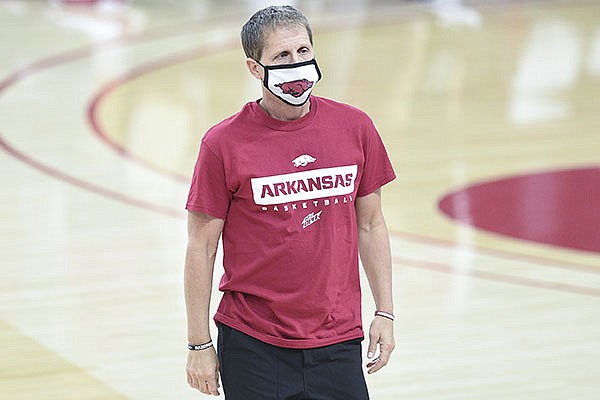 It was in reaction to Isaiah Joe’s announcement on Aug. 1 that he was withdrawing from the NBA Draft and returning to Arkansas for his junior season.

The 6-5 guard, who led the SEC with 94 3-point baskets despite missing six games because of a knee injury and averaged 16.9 points, was expected to be one of the top players in the nation.

Arkansas was 19-7 with Joe in the lineup last season and 1-5 without him, underscoring his importance not only on offense, but as a premium perimeter defender.

Check preseason top 25 polls now and the Razorbacks are nowhere to be seen. They didn’t receive one vote in the preseason Associated Press top 25 poll.

Expectations for Arkansas, from a national perspective at least, took a major hit when Joe announced on Aug. 17 he had changed his mind and was putting his name back into the draft.

Joe cited the uncertainty of a college season because of the coronavirus pandemic as the reason for his decision to turn pro.

The announcement Joe would stay in the draft came just a week before the fall semester began at Arkansas.

“Losing Isaiah Joe at the time we did was a huge blow to the roster,” Razorbacks Coach Eric Musselman said. “Not being able to fill his spot, it’s more than problematic.

“But, having said that, you move forward. Somebody else has to step up. Somebody else is going to have a bigger role than they would have had if Isaiah was here.”

How well the Razorbacks collectively fill in for Joe figures to go a long way toward determining if Arkansas can make its first NCAA Tournament appearance since 2018,

“This team has a lot of talent. We just need some time to put it all together.”

The Razorbacks are counting heavily on nine newcomers because Joe was one of four players they lost who started the majority of games last season.

The only returning player with significant starting experience is junior guard Desi Sills, who averaged 10.6 points and 3.0 rebounds last season. Sills started 24 of the first 26 games, then excelled off the bench in the final six games when he averaged 14.7 points.

“Desi has been a player/coach in drill settings,” Musselman said. “He’s the guy that’s first in line. He’s the guy that sets the tone from a culture standpoint on how hard we want to practice. He’s the player that understands our terminology. One-word phrases, he can interpret to his teammates quickly.”

“We want Desi to become a more consistent 3-point shooter and try to limit hot and cold streaks,” Musselman said. “He’s a much-improved dribble driver. He can score it at the rim.

“I thought he got better and better last year, and he was drastically different from his freshman to his sophomore year attacking the rim in transition. What’s also big for us with Desi is that he gives us a sense of toughness by how hard he competes.”

While Sills and 6-8 junior forward Ethan Henderson are the only scholarship players with SEC experience on the roster, six newcomers have previous college experience.

Connor Vanover, a 7-3 sophomore center from California, redshirted last season along with junior guard JD Notae from Jacksonville (Fla.) University and both are being counted on heavily.

Abayomi Iyiola, a 6-9 junior forward who redshirted after transferring from Stetson, tore the anterior cruciate ligament in his right knee during the summer and Musselman said he likely won’t be cleared to play until at least February.

“Connor’s got the ability to knock down threes, and he can be a rim protector and alter shots,” Musselman said. ‘Even if he doesn’t block a shot, he can change the trajectory of shots.”

Vanover also has worked on developing a hook shot – a sky hook and baby hook.

“I’ve been doing 100 hook shots every day after practice, just trying to work on my touch,” Vanover said. “I’m also just trying to be more aggressive down low.

“When I catch the ball, I’m very decisive with my passing. If someone’s cutting, I can easily get them the ball or I could do a hook shot. Just being effective down low whenever I get the ball has been the main thing on offense.

“When just defensively, it’s all about just being strong, not getting pushed off your spot. With my length, that can really come together.”

Notae suffered a broken left wrist in the summer, but he was able to go when practice started on Oct. 14.

“I feel like we’re going to really be a good cutting team,” said Notae, who averaged 15.5 points, 6.2 rebounds and 3.4 assists as a sophomore at Jacksonville. “We cut hard with our off-ball movement. A lot of people on our team cut backdoor, so you’re going to see a lot of that.”

Notae said he’s worked to improve his game on offense.

“Just being able to create space, getting defenders on my hip and being able to get my shot off,” he said. “I feel like I worked on that a lot.

“There’s going to be bigger, stronger, faster defenders in the SEC, so I feel like I need to be able to get my shot off quicker.”

Musselman said he expects Notae to be fully recovered when the season starts.

“JD’s a guy who can create his own shot,” Musselman said. “He’s got the ability to make a three ball. He can also put it on the deck and score.

In addition to Tate, the Razorbacks have two other senior graduate transfers in Justin Smith, a 6-7 forward from Indiana, and Vance Jackson, a 6-9 forward from New Mexico.

““I think this team will take on the personality of our head coach,” Tate said. “Just hard work, extreme accountability and locking in and being gritty on both sides of the floor.

“Defensively we’re going to have to be good to accomplish the goals we would like to have. On the offensive end, we need to take care of the ball, make guys guard, make the defense really work every single possession.”

Henderson is expected to provide some energy off the bench. He showed promise late last season when he averaged 4.1 rebounds over the final eight games.

“Ethan’s a guy that when he comes in, we want him to give us a spark,” Musselman said.

Moody averaged 11.6 points and 3.3 rebounds at Montverde, Fla., Academy last season. He shot 46% three-pointers last season and figures to get some of the minutes that would have gone to Joe.

“Moses has a got a real business-like approach,” Musselman said. “When he’s shooting, he doesn’t joke around. He looks like a seasoned veteran by his approach in drills. He’s been one of our best three-point shooters in practice.”

“Jaylin’s rebounding the ball, for a freshman, at a high level,” Musselman said. “And he’s got a unique skill set for a big man in that he can shoot the ball from the college three. It’s kind of an effortless shot.

“He’s a better ball handler than people would think. He can get a defensive rebound and take four or five escape dribbles up the floor.”

Davis was the Arkansas Democrat-Gazette player of the year as a senior at Jacksonville, where he averaged 21.0 points, 10.0 rebounds and 8.0 assists.

“Devo’s got a herky-jerky dribble game where he keeps the defense off balance,” Musselman said. “He can dip his shoulder one way and take the ball another way. He’s very deceptive.

“He can get his own shot when a play breaks down. He needs to improve his consistency from the foul line and as a perimeter shooter. He’s a guy that probably is going to play some two, some one and some three for us.”

Musselman said Davis also could play a role with his pressure defense.

“I do think he’s a guy that can have a speciality in certain situations of picking up the ball full court and causing havoc defensively,” Musselman said. “Because of his long arms and his good lateral quickness.”

“KK does a great job changing pace,” Musselman said. “He can really rush the ball up the floor, and he’s a shot-maker.

“In scrimmage situations, he’s shown the ability when the shot clock’s running down to get a shot off.”

Arkansas was picked to finish sixth in the SEC in a preseason media poll and Blue Ribbon has the Razorbacks No. 8 in the conference in its preseason rankings.

“We are a different team than where we were when Isaiah was on the roster,” Musselman said. “From a national respect standpoint, probably not a whole lot right now. So we have a lot to prove.

“We’re in the lab every day trying to get better,” he said. “We’re trying to find out who we are. I don’t feel like myself, or the coaching staff, dictates roles or style of play. I think the guys kind of identity their own roles, and they identify the style of play based on what suits the personnel we have.”

Musselman said there at still a lot of unkowns with the Razorbacks.

“I’ve brought up lateral quickness defensively is an area we’re going to have to keep an eye on,” Musselman said. “Who’s our go-to player late in games?

“The last four years [at Nevada and Arkansas] our teams have had the fewest amount of turnovers in the league that we played in. Can we value the ball and get a shot on goal and not turn the thing over.

“How selfish or unselfish will we play with one another? I think all those things are unknowns for ourselves and for the people outside our building as well.”