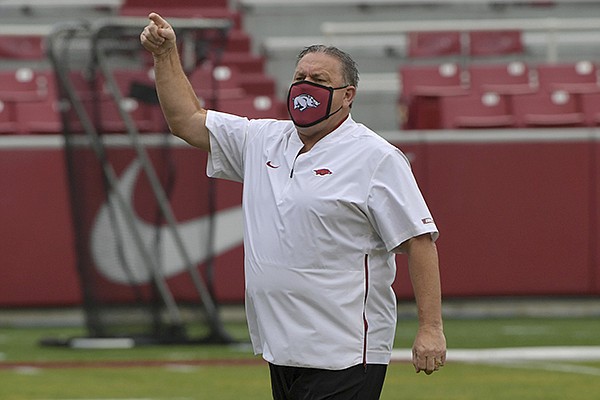 Arkansas head coach Sam Pittman with his team before the start of the Razorbacks game against LSU during an NCAA college football game Saturday, Nov. 21, 2020, in Fayetteville. (AP Photo/Michael Woods)

• Pittman said Jalen Catalon will remain suspended for the first half of the Missouri game. There is no way to review or petition those penalties, Pittman said. "Video review should be able to get those calls correct, so that was the feeling of video review, that they had ample time to make the correct call on the field."

• Pittman said the defensive linemen who played for the first time against LSU played "very hard."

• Pittman was asked who would return for the Missouri game. He said the teams numbers are "no better than they were Saturday."

• Pittman said the offensive line did not play "particularly well" against LSU. He said the Tigers did a good job of rotating safeties and forced plays to the inside. "We got whipped. Before that game I thought we were progressing, and we'll come back, but it was not one of our better games up front."

• Pittman said Reid Bauer did a good job punting against LSU with how quickly he got rid of the ball and his average.

• Pittman said the team has to field punts better. "You can look at it however you want, but we lost 39 yards letting the punt land. Whether we return for a yard or not, we have to catch the ball."

• On the blocked field goal, Pittman said the player who was beaten "stepped inside" and was not coached to play it that way.

• Pittman said the covid-19 tests have been accurate, so it's unlikely any of the players will be able to test out of protocol.

• Pittman said Nick Bolton of Missouri is one of the league's best linebackers. He also praised the play of the Tigers' secondary.

• Missouri's offense keeps teams off balance, Pittman said, but their desire is to run the ball like Tennessee did a few weeks ago.

• On the high tackle numbers of Bumper Pool, Grant Morgan and Jalen Catalon, Pittman said the team works on tackling all the time, and it has helped them, but they have become better tacklers as the season has progressed.

• On the roster, Pittman said the Razorbacks will submit a report on who is available, and the SEC makes the call on whether the game will be played.

• On Barry Odom returning to Missouri, Pittman said, "I'm sure there is a little bit of mixed feelings, just as I had against Georgia. The bottom line is Barry is a competitor and he will have our football team ready to play."

• Myles Slusher and Myles Mason will get Jalen Catalon's first-half playing time. Slusher went into the game when Catalon was ejected against LSU.

• Pittman said he called Catalon on Saturday night to check on him. "I think in his mind he did 100% everything right on the play."

• On Thanksgiving the team will practice early. The local players will go to their home and hopefully will take some of the non-local players with them. Those who stay in town will have a meal provided to them.

• Pittman said he's thankful to be the head coach at Arkansas. "I'm blessed....My Lord, it's been a pretty good year for me."

• Treylon Burks has been good this year, but Pittman said he will become a better player once he becomes a better practice player. "That's not a negative....but for us to get better, we have to have a little more urgency in practice."