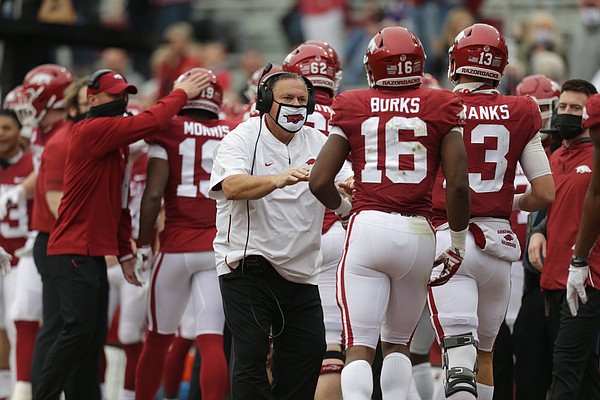 FAYETTEVILLE — Special teams continue to be a concern for Arkansas through eight games.

With Saturday’s game against LSU on the line in the final two minutes, the Razorbacks lined up for a potential game-tying 44-yard field goal. Essentially untouched, Tigers defensive back Jay Ward rushed off the left edge of Arkansas’ shield and was credited with getting a hand on the kick and forcing it to fall well short.

"On the blocked field goal, we stepped inside, we hinged,” Arkansas coach Sam Pittman said Monday. “We don’t teach that and we did it for whatever reason. The guy came off and he tipped the ball.”

It was the second consecutive key play made by Ward, who also tallied a pass breakup on Razorbacks quarterback Feleipe Franks’ swing pass to running back Trelon Smith on third-and-3.

The lack of protection by tight end Nathan Bax went down as Arkansas’ costliest miscue in the all-important third phase of the game. But it was not the only one.

In his Monday press conference reviewing the loss to LSU and looking ahead to this weekend’s matchup at Missouri, which was later postponed, Pittman expressed frustration with his team’s play on punt return.

“We have to field punts,” he said. “We have to put somebody back there that’s going to field the punt. You can look at it however you want. Whether we return it a yard or not, if we just catch the ball that’s plus-39 yards.”

Star receiver Treylon Burks is the Razorbacks’ regular punt returner, but he was replaced by Nathan Parodi after LSU’s Zach Van Rosenberg’s sixth punt. The senior punter downed five of his seven punts inside the Arkansas 20.

Among Burks’ mistakes was fair catching a punt over his shoulder at the Arkansas 8; allowing a kick that landed at the 20 to roll to the 9; and allowing another kick that hit at the 26 to roll dead at the 8.

Prior to the ball coming to a stop at the 8, special teams coordinator Scott Fountain rushed toward the north end zone to discuss Burks’ decision with him.

And on Parodi’s lone opportunity at punt return, Van Rosenberg’s final punt landed at the 13 and rolled to the Arkansas 7. The Razorbacks’ average starting field position in the loss was their own 19.

“We have to get our punt returner in the right position and we have to catch the football," Pittman said. "That’s (all) on that.”

Arkansas has not recorded a punt return in six of its eight games this season. In all, Burks and Parodi have combined for two returns for three yards.

The Razorbacks’ three punt return yards rank 116th out of 123 Division I teams in 2020, and next to last in the Southeastern Conference. Ole Miss has minus-1 return yards.

"Our situation here, and it’s not only (Burks), we have to continue to be a good practice team,” Pittman said. “I think as soon as he becomes a better practice player, I think he’ll even become a better player. That’s nothing that we haven’t talked to him about. And that’s not a negative.

“We have a lot of guys that have to become better practice players. We are, but for us to reach where we need to get, we’ve got to have a little bit more urgency at practice.”