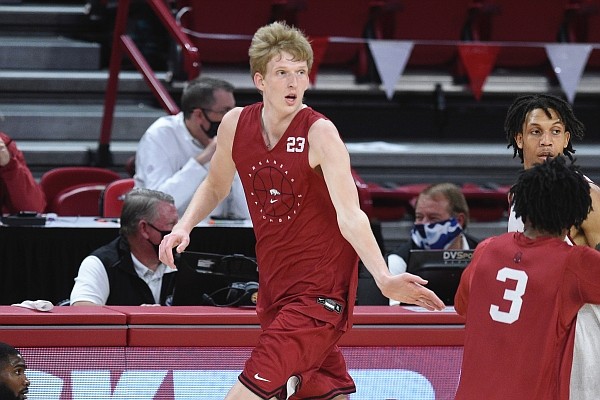 A Little Rock native and transfer from California who redshirted last season, he was listed at a daunting 7-3, 247 pounds — up 17 pounds over the previous year. Thanks to daily protein shakes and dedication in the weight room, he had surpassed his goal weight of 245 pounds for his first eligible season with the Razorbacks.

And he was eager to put it to good use. Then he got sick.

As Arkansas’ season opener against Mississippi Valley State, which ranks last out of 357 Division I programs, according to KenPom.com, nears on Wednesday, Vanover has some ground to make up in order to be at his best.

“He's playing catch-up, for sure,” Razorbacks second-year coach Eric Musselman said Monday. “He missed, shoot, almost three weeks when we were grinding, and when we were doing what I would consider our conditioning. When you build this thing up, you build it up with timing and it's got certain segments or blocks in the calendar year where it's conditioning (in which) we're burning their legs out, and you try to taper it down.

“We have all of these records of what we do in past years on how to get (the team) to the right spot, and Connor missed a lot of that. Like, he is still playing catch-up on a lot of things.”

When Vanover last spoke to reporters on Oct. 30, he noted that his weight was hovering around 230 pounds.

“He had done a really good job the last year of adding weight and adding muscle, and then he’s been sick a few times and kind of lost weight,” Musselman said. “We’ve just got to get him on the floor and then keep him in the weight room and keep him eating as much as he can.

“He did a great job all last year and most of the offseason, then it’s easy to lose ground when you’re not fully healthy.”

Vanover was limited in the team’s Red-White scrimmage on Nov. 12.

He finished the game with seven points on 3 of 7 from the floor and 1 of 5 from 3-point range in seven minutes for the Red team. Vanover and the coaching staff are hopeful he returns to full strength sooner rather than later.

One of Vanover’s goals for 2020-21 was to get out of his comfort zone. The forward also wants opponents to view him as a well-rounded threat, not just a 7-3 weapon on the perimeter.

“I’ve been working on my post game a lot, trying to get better on defense where I can cover multiple positions and try to use my length more effectively to be able to block shots, deter shots at the rim,” said Vanover, who models parts of his game after Dallas Mavericks forward Kristaps Porzingis, who also stands 7-3.

“Kind of being an upperclassman now and someone who’s kind of a veteran in this system, I can really try to help these new guys — these younger guys, the people who are transferring in — to really know the system since I’ve been in it for a year already.”

Vanover’s readiness and how much time he will see in Wednesday’s opener is not clear. But he does have a couple of things going for him even if he is a bit behind in terms of being in game shape.

“He’s got a really, really high basketball IQ and he's got a really great skill set, so (that) has kind of saved him while he's missed time,” Musselman said Monday. “He still knows our offense as well as anybody, even though he's missed some time with us.”