Arkansas vs. Mississippi Valley State: How to watch and listen, notables 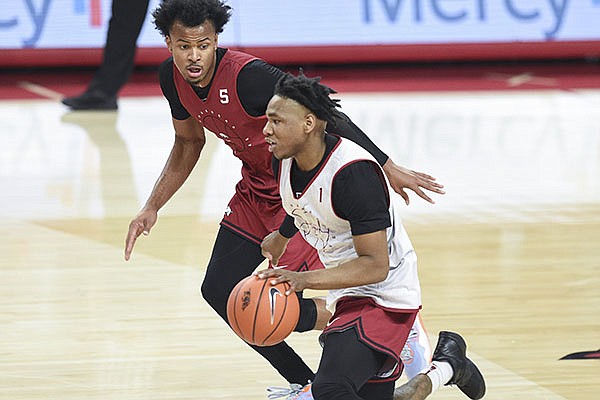 Arkansas guards JD Notae (1) and Moses Moody (5) run down the court during the Razorbacks' Red-White Game on Thursday, Nov. 12, 2020, in Fayetteville.

RADIO Razorback Sports Network can be accessed through local FM and AM affiliates. Not all affiliates will carry the game. The game audio can also be accessed on the Razorback GameDay App, the TuneIn app and on satellite radio via Sirius XM Ch. 390.

TELEVISION The game will be streamed by SEC Network-Plus, which is accessible via WatchESPN.com and the ESPN app (carrier login required).

NOTABLE Mississippi Valley State is ranked No. 357 out of 357 Division I teams by KenPom.com, which is a power ranking for college basketball that is based on projected offensive and defensive efficiency. MVSU is projected to have the 355th-ranked offense and 357th-ranked defense in college basketball this season. The Delta Devils are projected to have the fastest-paced offense in the country….MVSU coach Lindsey Hunter was a 17-year NBA veteran who won an NBA championship with the Los Angeles Lakers in 2002. Hunter is a former interim head coach of the Phoenix Suns….Arkansas has not played a game since an 86-73 victory over Vanderbilt in the first round of the SEC Tournament on March 11. The 258 days between games is the longest since the Razorbacks went 265 days without a game in 1986, according to HogStats.com….Arkansas graduate senior Brandon Kimble transferred from Mississippi Valley State during the offseason. Kimble averaged 4.8 points and 5.9 rebounds last season….Arkansas’ roster includes seven transfers from other Division I programs: Kimble, Justin Smith (Indiana), JD Notae (Jacksonville), Vance Jackson (New Mexico), Jalen Tate (Northern Kentucky), Emeka Obukwelu (Texas-Tyler) and Connor Vanover (California). The Razorbacks’ roster also includes Abayomi Iyiola, who began his career at Stetson. Iyiola is rehabbing from a torn ACL.