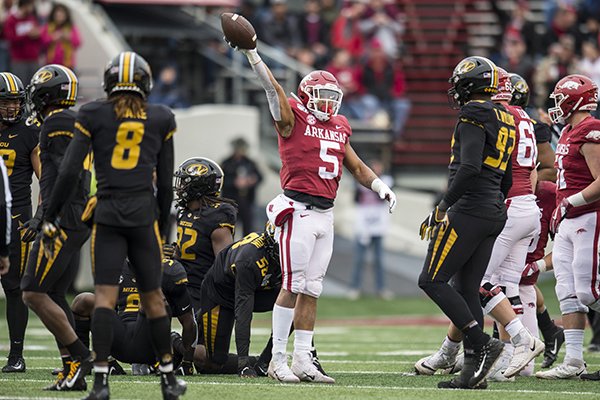 Arkansas running back Rakeem Boyd motions for a first down during a game against Missouri on Friday, Nov. 29, 2019, in Little Rock.

FAYETTEVILLE — The University of Arkansas football program almost made it into December without having their football schedule disrupted by the coronavirus pandemic.

But the streak of consecutive games ended at eight as the SEC announced late Monday afternoon that the Razorbacks’ road game at Missouri scheduled for Saturday would be postponed due to virus issues in the Arkansas program.

“Coach Sam Pittman and I are disappointed that we could not find a viable path for our student-athletes to safely compete at Missouri this weekend,” Yurachek posted. “We will use this week as an opportunity to get healthy again and we look forward to playing Alabama and Missouri to end the season.”

Pittman gave a bleak assessment of the Razorbacks’ covid numbers at his regularly scheduled video conference at noon on Monday before the news broke.

Players who are in quarantine due to contract tracing have to be out 14 days because sometimes it takes several days before the virus manifests into a positive test.

It is not certain which of the thresholds the Razorbacks did not reach.

Six regular contributors on the defensive line were out against the Tigers, including redshirt freshmen starting ends Eric Gregory and Zach Williams, along with ends Dorian Gerald and Julius Coates and top defensive tackles Isaiah Nichols and Xavier Kelly.

Senior tackle Jonathan Marshall, the only healthy starter on the defensive front, played virtually the whole game and the personnel issues essentially forced the Razorbacks to stay in a three-man front the entire game. Sophomore Mataio Soli, an 11-game starter in 2019, started at one defensive end spot and the Razorbacks rotated with redshirt freshmen Taurean Carter, Marcus Miller and Enoch Jackson — all listed as defensive tackles — at the end positions.

Pittman did not sound positive about having any players return by Saturday if the Razorbacks’ schedule had held.

“So it would be today’s results and then we’d able to test again tomorrow and the next day and possibly get them back out. But that hasn’t worked out very well here. The tests have been very accurate, so to think that’s going to happen, probably it won’t. Because the past says that it hasn’t.”

The Razorbacks used only starter Trelon Smith and T.J. Hammonds at tailback with their numbers low. Hammonds contributed a 51-yard catch after going in motion from the backfield to a split position, and had a 29-yard run on his only carry. Smith ran for 28 yards on 11 carries, with a long run of 7 yards.

Arkansas is scheduled to host Alabama on Dec. 5, and the Razorbacks still have an open date of Dec. 12 with which to accommodate a game. The SEC also added Dec. 19, the scheduled date of the SEC Championship Game, as an extra date to schedule games.

The SEC did not announce a makeup date for the Arkansas at Missouri game but did reveal a shuffling to the schedule.

Missouri will now host Vanderbilt on Saturday in a makeup of a previously postponed game. The Commodores’ game against Tennessee — which had been scheduled for Saturday — will have to be moved.

Arkansas, Kentucky and South Carolina were the only SEC teams to enter this week with eight games played, and the Razorbacks and Gamecocks were the only teams who had not had their schedule juggled due to the pandemic.