'We expect to win everything now': Standards led to Razorbacks' improvement 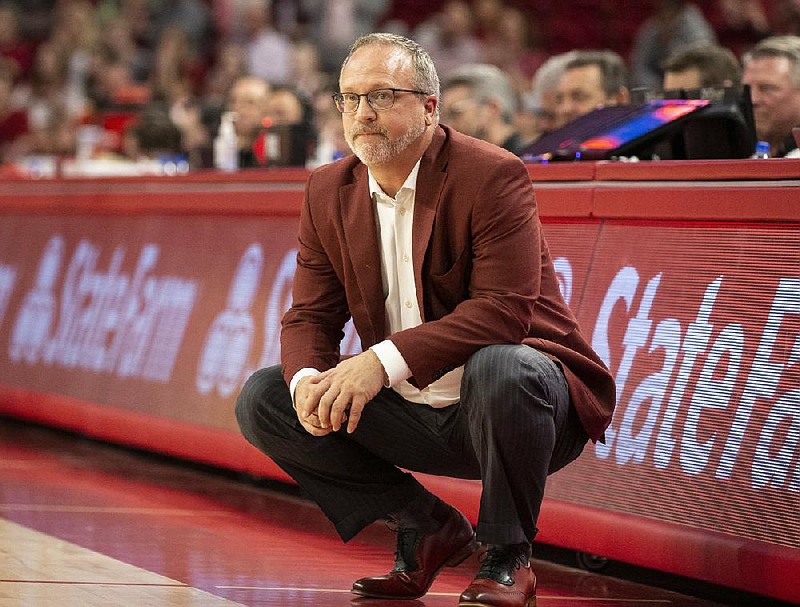 During his introductory press conference in 2017, the former Washington head coach relayed why that is.

"We learned a few years ago to burn goals," Neighbors said. "We had a team that went to the first round of the NCAA tournament with a really cool T-shirt that said, 'NCAA Tournament or bust.' That was our goal, and we got to the NCAA Tournament and we busted.

"We got in, but we were satisfied because we got the goal."

To avoid a bust at Arkansas, Neighbors never tells his team to set goals. Instead, he instills standards.

In 2017, the standards were team-oriented.

"I guess you could say the standard was to become more focused on one another and focus on the team that we were going to build for the future," Arkansas senior guard Jailyn Mason said.

Mason was a sophomore on Neighbors' first team and had played and started in every game the year before under the previous staff. She witnessed firsthand the Razorbacks win just five games in two years in the Southeastern Conference.

Flash forward to 2020 and the standards have shifted from team-oriented to results-oriented.

"Our standard is to win," Mason said. "We have seen the progress that we have made. We were going to make the NCAA Tournament last year, and unfortunately covid kind of got in the way of that. But now with that kind of chip on our shoulder, we think that we can go even further."

"We expect to win everything now," Neighbors said earlier this month. "I didn't think it was fair to come in here, No. 1, and talk about winning conference championships and going to the NCAA Tournament when that hadn't been happening, and that wasn't the expectation. Likewise, now that we're there, let's win everything.

"Still focus on what it takes to get there, but I think our locker room expects to beat (defending national champion) Baylor on Dec. 6."

The Razorbacks were picked to finish fourth in the SEC by the league's coaches earlier this month, the highest preseason projection ever for the women's basketball program.

While preseason projections are nice, Neighbors wants to stress that Arkansas hasn't made it yet.

"We're in the talk," he said. "But until we back that up with a Sweet Sixteen run, an Elite Eight run, get a magical draw and play whatever tournament they give us a chance to play in, that's the next thing that we have to do. But I do think we have confidence in that part of it."

Confidence will be key for the Razorbacks, since for the first time in a while they will be a team to beat in the SEC.

"It makes games harder. We're no longer being the hunter mentality(-wise)," Neighbors said in reference to the Razorback's new position they find themselves in this year. "Things change when the deer has the gun instead of the other way around."

Arkansas hasn't turned regular-season success into NCAA Tournament wins yet, but Neighbors can still see the on-court success paying dividends off the court.

"We've got recruits calling (us) instead of (us) calling recruits," he said. "You've got transfers that we're turning down instead of begging."

When he first took over as Arkansas' coach, Neighbors remembers going out on the recruiting trail and casting a vision of the future to recruits. Now, he can just point to the Razorbacks' 24-win season and top-tier finish in the SEC last year instead of appealing to a recruit's imagination.

"We were selling them this vision of, 'I know you've got all of these other schools who are doing it right now, but if you'll come here we will eventually do it before you leave,'" Neighbors said. "So it gives evidence that we're not just running our lips.

"It's not a lot of lip service. We're going to talk about doing it and then go out and do it after the fact."

The Razorbacks' first opportunity to prove they're not about lip service comes Wednesday at 11 a.m. against Oral Roberts. The Golden Eagles are led by All-Summit League first-teamer Keni Jo Lippe. The senior from Adair, Okla., averaged 18.5 points a game last year and set the Summit League record with 46 points against North Dakota State.

After opening the season against Oral Roberts, the Razorbacks will travel to Fort Myers, Fla., for the Gulf Coast Showcase, where they are scheduled to play Wake Forest, Florida Gulf Coast and Maryland.