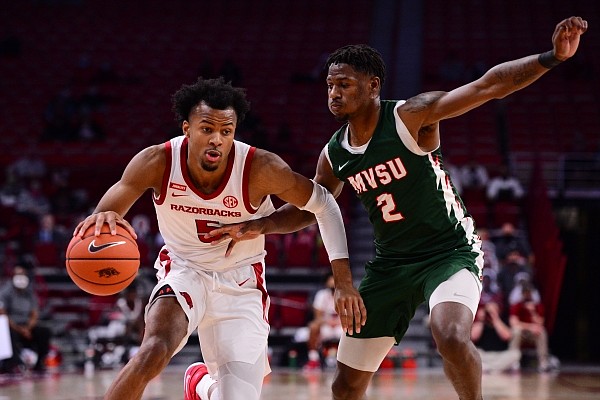 Arkansas freshman guard Moses Moody drives to the rim during a game against Mississippi Valley State on Nov. 25, 2020, in Bud Walton Arena in Fayetteville.

Behind 23 points from Connor Vanover and double-figure scoring nights from seven other Razorbacks, Arkansas ran away with a season-opening win over the Delta Devils on Wednesday.

Vanover hit 8 of 11 shots, including 4 of 5 attempts from 3, to lead the Razorbacks. Arkansas knocked down 20 3s in the win.

Moses Moody added 18 points in his debut, JD Notae pitched in 13 points to go with five rebounds and seven assists, and KK Robinson and Vance Jackson scored 15 apiece. Jaylin Williams was a point shy of a double-double – nine points and 10 boards.

Terry Collins, who finished the game a minus-82 when on the floor, scored a team-high 15 points for the Delta Devils. He shot 6 of 18 from the floor and 3 of 12 from deep.

The Razorbacks return to play this weekend against North Texas in Bud Walton Arena. Tipoff is scheduled for 5 p.m.

We will have more from tonight's game a little bit later on WholeHogSports.com.

The Razorbacks have eight players in double figures tonight, led by Connor Vanover's 23. His night is done. JD Notae buried a right-wing 3 to give him 10 points. He is flirting with a double-double in his debut as well.

Ethan Henderson and Brandon Kimble are the only Razorbacks who have hit the floor to not score tonight. They'll have their shots in the final three-plus minutes.

Davonte Davis has looked solid in the last couple of minutes. He took his defender off the bounce going left and hit a layup and drew a foul. He scored on a floater in the middle of the lane shortly after, too. Arkansas' freshmen have had really solid nights.

Connor Vanover leads the way with 23 points on 8 of 11 from the floor and 4 of 5 from deep. He just missed his first triple of the night from the top of the key. Vanover has scored 20-plus points in two of his last three games dating back to his freshman season at Cal.

Desi Sills, Vance Jackson and KK Robinson each have 15 points tonight. JD Notae has added seven points and a game-high six assists. He can get anywhere on the floor with the ball in his hands. He's been impressive tonight although he hasn't erupted offensively.

KK Robinson is having a very nice debut. He is up to 15 points, one off the team lead, on 5 of 7 shooting. Looks very confident and in control tonight.

Connor Vanover has a team-high 16 points for Arkansas. Desi Sills and Vance Jackson also have 15 in the game. Sills has 10 since halftime, and Moses Moody has 10.

Arkansas came out of the halftime locker room on fire offensively. The Razorbacks just put up 21 points in a little more than four minutes.

Desi Sills has led the second-half charge to this point, adding eight points on 3 of 3 from the floor to give him 13 points on the night. He had an and-1 on a nice backdoor feed from Justin Smith, threw down a monster dunk following a steal then hit a left-wing 3.

Moses Moody also has seven points in the second half, pushing him to 10 points on the night.

JD Notae will be at the line when play resumes.

The Razorbacks shot the ball well in the first half, leading to their 31-point edge at the break. They scored at a blistering 1.419 point-per-possession clip.

Four Arkansas players – Connor Vanover, Vance Jackson, Justin Smith, KK Robinson – are in double figures. Jackson leads the way with 12 while the other three have 11 each. Smith also has three steals.

The Razorbacks finished the first half 12 of 19 from 3, and the Delta Devils found some success beyond the arc late in the half. They hit 8 of 22 attempts, forcing Eric Musselman to kick over a chair on the bench after they hit their sixth of the game. Three-point defense has been a bit lacking.

I will be looking for a much improved Moses Moody in the second half. He got off to a solid start thanks to a steal and a score on the break, but he went into the halftime locker room 1 of 5 from the floor in 10 minutes.

Right out of the under-8 media timeout, Vance Jackson added another 3, giving him 12 points on the night. The bucket also pushed him over 1,000 points in his college career. He entered tonight's game with 990.

Connor Vanover has been impressive in his debut as well. He has 11 points on 4 of 5 from the floor and 3 of 3 from distance. Vanover also has five rebounds and a pair of blocks.

Justin Smith has seven points and KK Robinson has six.

Arkansas may have a comfortable lead well before halftime, but Eric Musselman is not happy with his team's 3-point defense. The Delta Devils have six 6 of 19 attempts from deep. Caleb Hunter and Terry Collins are a combined 4 of 11 from 3 to lead the visitors.

The Razorbacks are on a 30-2 run over the last seven-and-a-half minutes and have pushed their lead to 30 already.

Arkansas is 8 of 14 from 3, and Vance Jackson is leading the way there with three triples on four attempts. Connor Vanover has eight points and four rebounds as well. Eight Arkansas players have already scored.

This Razorbacks group can score in bunches in a flash.

Arkansas is on a 19-2 run over the last 3:42 and has extended its lead to nearly 20. Lindsey Hunter called a timeout with a little under 11 minutes left in the half to try to slow the Razorbacks' roll offensively, but it didn't work.

Connor Vanover has hit his first two 3s of the season, KK Robinson got in on the fun from 3, too, and Desi Sills hit a right-wing 3 just before the under-12 media timeout. Arkansas is 5 of 8 from distance to open the game and 10 of 15 from the floor.

Vanover leads with eight points. He also put back a missed jumper at the rim prior to his two triples.

Justin Smith got the Razorbacks on the board with a bucket at the rim. He added another score in the restricted area following an airball by Vance Jackson from the right wing. Smith has been active defensively, too, with a pair of steals.

Moses Moody and Jalen Tate each have three points as well. Moody scored his first college point at the foul line, then picked the pocket of an MVSU guard and cashed in with a layup. Tate knocked down a left-wing 3 for his first points of the season.

Jaylin Williams and JD Notae were the first two players off the Razorbacks' bench.

For the Delta Devils, they have hit 2 of 4 3-point attempts and turned the ball over four times.

This is Arkansas' first game since March 11 and the program's latest start to a season since 1994-95. The Razorbacks' roster features 10 scholarship newcomers, including three graduate transfers, which are all starting tonight.

Entering Year 2 under Eric Musselman, Arkansas is ranked No. 54 in the country, according to preseason rankings on KenPom.com. That ranking is good for seventh-best in the Southeastern Conference.

The Razorbacks are 5-0 all-time against Mississippi Valley State. The teams' last meeting was in Nov. 2011, a game Arkansas won 97-64. The Razorbacks' average margin of victory in the series is 26.4 points.

The Delta Devils are coached by Lindsey Hunter, who spent 17 years in the NBA as a player and another two years as a coach in the league. Mississippi Valley State is ranked 357th out of 357 Division I programs, according to KenPom.

Caleb Hunter, the son of the coach who averaged 15.7 points per game last season, is the Delta Devils' lone returning player from a season ago. He attempted 31% of the Delta Devils’ shots when on the floor last season, and finished as a 27.8% 3-point shooter on 259 attempts.