JD Notae using his past as fuel for the future 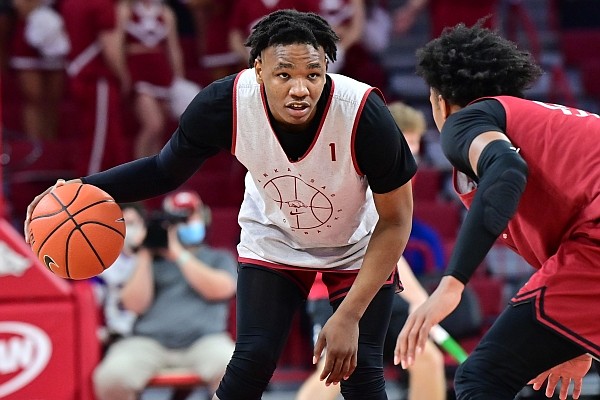 Arkansas guard JD Notae looks at the game clock during the Razorbacks' annual Red-White game on Nov. 12, 2020, in Bud Walton Arena in Fayetteville.

FAYETTEVILLE — There were times when the lights in JD Notae’s childhood home were shut off and there was nowhere else for him and his mother to go.

Other times, they found solace living with his grandmother. Stacy Notae, JD’s mother, was a single parent. But before he turned 11, they were kicked out of the house and forced to live with one of his mother’s friends.

JD’s upbringing in Georgia was anything but ordinary. Then consider he spent four years of his youth separated from his mother.

“It was a little rough growing up,” JD Notae said. “She got arrested. It had a big effect on me because I had to go see her in a prison. That’s something I never wanted to do either — go to jail.

Arkansas vs. MVSU: How to watch and listen, notables

“I’ve seen where that is, so that’s something I don’t want to do.”

With that, Notae said he would not be the man he is today or where he is now, in his second year at Arkansas, without his mother. She worked hard, got back on her feet and was able to look out for her family again.

He looked to her as an example, and watching her right the wrongs of yesterday birthed a strong work ethic. He is using his past as fuel to propel him toward a bright future.

“I’d say (our bond) is what a mother-son relationship should be,” Notae said. “She’s the only parent in my life. She was always there to tell me right from wrong and what I should and shouldn’t be doing.

“I’m not some type of guy who thinks he’s better than everybody else, because I know where I come from and I know what I’ve been through. I know people have been through less and been through more, so I try not to judge people.”

There was not much to do in Notae's hometown of Covington, Ga., aside from play sports.

He first began playing football. Cornerback was the position he enjoyed most, but he was more than adequate at other spots on the field. Then, during his eighth-grade year, he found basketball, and he never let it go.

By the end of his sophomore season at Newton High School, the realization came that he could play the game at a high level. Suddenly, he started setting his sights on playing college basketball.

“I was playing against all these top guys, so, I mean, that just gave me motivation,” he said. “Like, why not? For my team, I was the x-factor. I was just one of those guys on the team that just could score at any time and I was going to guard the other team’s best player.

Despite being a four-year starter at Newton and averaging 22 points, 5 rebounds and 2.5 steals per game as a senior, scholarships did not come pouring in. Notae said he only held two other offers — Kennesaw State and North Carolina A&T — when he committed to Jacksonville (Fla.) University.

In his two seasons with the Dolphins, he won Atlantic Sun freshman of the year and was named second team All-ASUN. Over 60 games, he averaged 15.5 points and 5.5 rebounds.

At the conclusion of the 2018-19 season, Notae felt it was in his best interests to transfer from Jacksonville. Why? He had an opportunity to grow elsewhere. Arkansas turned out to be just the place for him.

And following a redshirt season that saw the guard gain confidence in himself and many aspects of his game, including shooting off the dribble and his perimeter jumper, he enters his first eligible season with the Razorbacks with great expectations and as a key piece to the puzzle.

The Razorbacks open their 2020-21 season tonight at home against Mississippi Valley State.

“The one thing with JD is he can get his own shot by himself,” Arkansas coach Eric Musselman said. “In other words, he doesn’t need a play to manufacture a shot attempt, and that sounds easy, that a player can go get his own shot, but very few players can get a good, clean look at the basket regardless of what type of defense they’re playing against.

“He does have that innate ability.”

The Razorbacks’ staff is hopeful Notae can shoot the 3-pointer as he did his freshman season at Jacksonville when he connected on 40.7% of his 108 attempts. Thirteen times he made multiple threes in a game.

He is a true combo guard in Musselman’s eyes and has been known to dazzle in 1-on-1 situations. While he is certainly starter material, Notae could be a go-to player late in games who also provides scoring off the bench. That remains up in the air.

“I think he’s a guy that’s streaky,” Musselman added. “He’s going to have some stretches this year where he’s going to be able to put points on the board fairly quickly. … He’s got to get better defensively. He’s got to play with more of a sense of urgency at all times.

“Certainly JD is a guy that can go get his own shot whenever he wants. He’s got a really good step-back 3 and he’s really good going to the basket and drawing free throws.”

Notae's play this preseason jumped out to Indiana graduate transfer forward Justin Smith, who has played 98 games in his college career and for three seasons faced stout guard play in the Big Ten. That was the case, too, after Notae put up a team-high 30 points in the Red-White scrimmage on Nov. 12.

"What impressed me the most is his natural ability to score and kind of get downhill and get the defense on their heels. He’s always looking to make a play," Smith said. "He’s a dynamic scorer and he brings a lot to the table."

Coming off what Arkansas' staff calls his development year, Notae is as eager as ever to take the floor in a meaningful game.

"It’s exciting," he said. "I’m looking forward to playing instead of having to go watch games. It’s more exciting now.