Virus not only culprit for Hogs' postponement 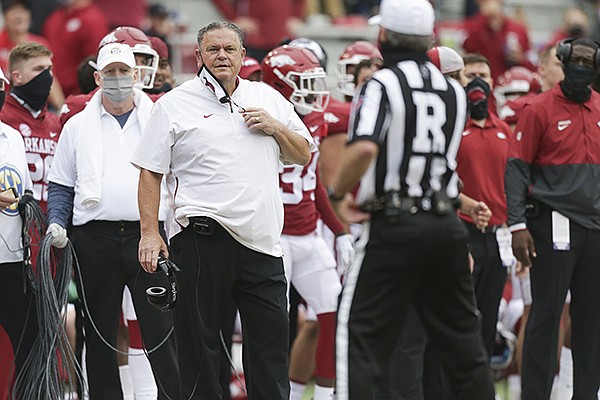 Arkansas coach Sam Pittman looks toward referee Marc Curles during a game against LSU on Saturday, Nov. 21, 2020, in Fayetteville.

FAYETTEVILLE — The University of Arkansas dropped below the established threshold of 53 available scholarship players set by the SEC to trigger a postponement Monday, leading to the movement of Saturday’s scheduled game at Missouri.

UA senior associate athletic director Kevin Trainor said the drop below 53 available scholarship players was affected not only by covid-19 testing and quarantining, but also several other factors. Among them are injuries, academic-related issues and potential disciplinary action. All categories of absences count into the total number of available players passed along to the SEC office.

Coach Sam Pittman voiced his concerns about those factors Monday at noon prior to the SEC’s announcement around 5:20 p.m. that the game was postponed.

“Can we get a guy or two back? Sure. I think the timeline has been that we could possibly get one or two guys back. But then you’ve got to look into injuries, yesterday’s test and all those things. Certainly our numbers aren’t any better than what they were Saturday.”

Missouri Coach Eli Drinkwitz said at his Tuesday news conference that he appreciated Pittman calling him Monday morning to give him notice that the Razorbacks’ numbers put them on the brink of a postponement.

Pittman was asked Monday who has the final call on declaring a postponement.

The mandatory minimums of available scholarship players established by the SEC in addition to 53 total are seven offensive linemen, including a center; four defensive linemen; and one quarterback.

Arkansas will not play a football game on Thanksgiving weekend for just the second time since joining the SEC for the 1992 season.

The Razorbacks did not play on Thanksgiving weekend of 1995, the year of their first SEC West title. Arkansas lost 28-0 at LSU on Nov. 18, 1995, two weeks prior to facing Florida in the SEC Championship Game.

The Razorbacks are faced this weekend with their third postponement since 2001. In that season, the terrorist attacks of Sept. 11 led to the postponement of a game against North Texas that was eventually moved to 2003.

Arkansas fell to second-to-last in the FBS in time of possession after being whipped in that department 41:43 to 18:17 by LSU.

“I’d say it was huge,” Arkansas Coach Sam Pittman said. “I mean they let the clock run down. They looked [to the sideline] on every play.

“The problem was they were winning first down. When you win first down and you’ve got second and 3 and second and 4, you can sit there and you can milk the clock all day.”

The Razorbacks now average 24:57 of possession time per game, meaning their opponents have the ball for 35:03, more than 10 minutes more than Arkansas.

The only FBS team with less possession time is Syracuse, which lags more than a minute behind the Razorbacks at 23:54 per game.

University of Arkansas officials conducted what they determined to be a successful drive-through food drive Tuesday from 11 a.m. to 2 p.m. at Reynolds Razorback Stadium.

UA Athletic Director Hunter Yurachek wrote about the drive on social media, posting, “Today’s Food Drive was a huge success, our team collected over 3,000 donated food items to benefit local organizations. Thanks to all who participated. #OneRazorback.”

The Razorbacks were scheduled to have a relatively early bus caravan to Columbia, Mo., on Friday to be in position for what had been an 11 a.m. kickoff Saturday.

Because the Razorbacks have high numbers of players affected by covid-19 testing and tracing, their conduct on the now open date for Thanksgiving weekend will loom large on how the rest of the season unfolds.

Arkansas (3-5) is scheduled to host Alabama on Dec. 5, and its game against Missouri would slot into one of the final two available dates of Dec. 12 and Dec. 19, barring further disruptions.

LSU’s Zach Von Rosenberg was chosen as the Ray Guy Award punter of the week by the Augusta (Ga.) Sports Council for his work in the Tigers’ 27-24 win at Arkansas on Saturday.

Von Rosenberg, a 30-year-old from Australia, had seven punts for 342 yards against the Razorbacks for an average of 48.9 yards per punt. He put five inside the 20-yard line and had a long punt of 61 yards.

Von Rosenberg was chosen from a list of four finalists that also featured Lucas Dean of Texas-San Antonio, John Haggerty of Western Kentucky and Tommy Heatherly of Florida International.

The Razorbacks had six three-and-out possessions against LSU, four in the first half and two in the second.

The three-and-outs made up nearly half of Arkansas’ 13 possessions and contributed significantly to LSU’s more than 2-to-1 time of possession advantage. The Razorbacks’ longest drive was a seven-play sequence in the second half that yielded A.J. Reed’s 22-yard field goal early in the fourth quarter.

LSU had six possessions of at least seven plays, and four of 10 plays or longer. The Tigers had only three three-and-out series among their 14 drives.