Analysis: Razorbacks have shown promise in 2020 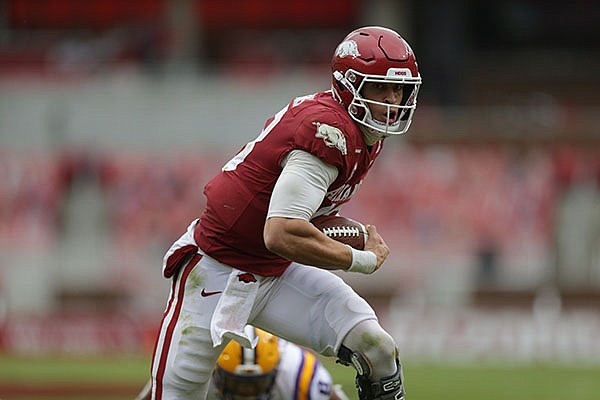 Arkansas quarterback Feleipe Franks runs with the ball during a game against LSU on Saturday, Nov. 21, 2020, in Fayetteville.

FAYETTEVILLE — When families gather today in their various settings in the Natural State to celebrate their blessings on Thanksgiving Day, they might say a few unflattering words about the global story of 2020: The covid-19 pandemic.

Those who are fans of the Arkansas Razorbacks will note that in this trying season the University of Arkansas had its first disruption of a scheduled game this weekend largely due to the coronavirus. The SEC postponed the Razorbacks’ game at Missouri on Saturday due to the Arkansas football program dropping below the minimum of 53 healthy scholarship players established by the SEC medical guidance task force that can lead to a postponement.

It will mark the first time since 1995 the Arkansas football team has not played on Thanksgiving weekend.

While they’re on the subject of Razorback football, fans might just give thanks that Arkansas is winning games again after three years in the SEC wilderness.

Arkansas will take a 3-5 record into its final pair of games against Alabama and Missouri during the final three playing dates of this most unusual college football season. Of course, the erroneously officiated end of the Auburn game cost Arkansas a win that would make the Hogs 4-4.

Last Saturday, a plucky roster decimated on the defensive front and at tailback by covid-19 losses battled defending College Football Playoff champion LSU, a 40-plus point favorite in their meeting last season, down to the wire in a 27-24 loss.

The competitive fire of this year’s Razorbacks is evident.

Sam Pittman was seen as a slightly out-of-the-box hire by Athletic Director Hunter Yurachek and his search crew sidekicks Jon Fagg and Steve Cox. Not because he didn’t lack respect within the industry, but because he hadn’t served as head coach at a major college during his distinguished 32-year career.

The first half of the season opener against No. 4 Georgia, the program Pittman had just enjoyed a remarkable four-year run with, served as a bold opening statement that Pittman knew what he was doing and had hired a clever and capable staff to start the difficult rebuild with the Razorbacks.

Arkansas led the Bulldogs 7-5 at halftime before going on to fall 37-10.

Since rallying from a 24-point deficit — believed to be the largest in school history in a win — to down Ole Miss 38-37 on Oct. 28, 2017, the Razorbacks had played 19 SEC games and lost them all prior to Pittman’s arrival.

Seven of those games had been decided by seven points or less, and two of them came in the final pair of games during the Bret Bielema era.

Cumulative score during the 19-game SEC losing streak: Opponents 747, Razorbacks 353. That’s an average score of 39.3 to 18.5, so an average of a three-touchdown loss week in and week out for virtually two and a half years of SEC play.

These are the shambles Pittman and his staff inherited.

So, yes, Razorbacks fans are very likely to be thankful that the football program seems entrenched on firmer footing with the promise of improvement ahead.

Pittman, given that backdrop on his Monday video conference, was asked what he would be thankful for today.

Yurachek, speaking recently to the Arkansas Democrat-Gazette about the work Pittman did in assembling his coaching staff, honed in on how the coaches motivate and treat the players.

Pittman’s hiring of defensive coordinator Barry Odom, a long-time friend who had been head coach at Missouri for four seasons, was the cornerstone for assembling the staff.

“Sam said during the interview process one of the things he knew he needed was someone who had been a sitting head coach that would help him navigate some of the uncharted waters he had of not having been a [major college] head coach,” Yurachek said. “I thought that was really big of him as a first-time head coach to hire somebody like Barry and to see that as a complement and an asset and not a threat.

“Barry has been just that to Sam. He’s been a complement and an asset. You could come over here just about any day of the week at lunchtime and see Sam and Barry walking together, of course six feet apart from each other. But I mean Sam depends on Barry for a lot of things as a first-time head coach.”

Arkansas football is in a much better place today than it has been for years, and for that Razorback fans around the world will give thanks today.