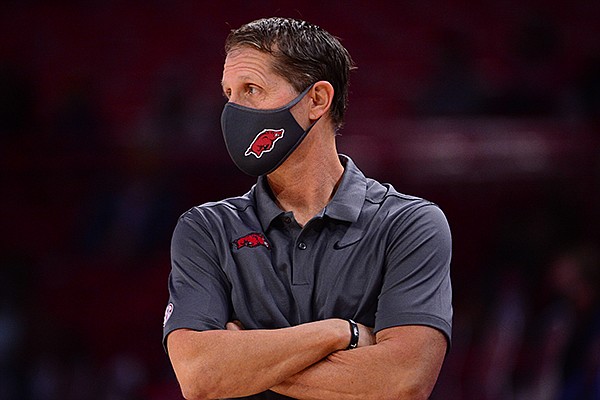 Arkansas coach Eric Musselman is shown during a game against Mississippi Valley State on Wednesday, Nov. 25, 2020, in Fayetteville.

It didn’t mark the only big difference over last season.

After but one game these Razorbacks already sport more defensive diversity than last season.

Musselman arrived at Arkansas in 2019 after four years head coaching the University of Nevada preceded by a long career coaching in the NBA and development leagues.

Man-to-man is all they used to play in the NBA. He played all man at Nevada and previously at Arkansas.

So why some zone now?

The late Bill Musselman, Eric’s father and first and everlasting coaching idol, head coached Ashland University, the University of Minnesota and South Alabama, plus coached pros 22 years including head coaching the San Diego Sails and Virginia Squires in the since-defunct ABA, and the NBA’s Cleveland Cavaliers and Minnesota Timberwolves. He died in 2000 while assistant coaching the Portland Trailblazers.

During his career Bill Musselman authored a book entitled 33.9-defense.

“She continually talked about my father’s book, 33.9,” Eric Musselman said. “She actually sent me a copy of the book, 33.9. I think it was probably published in the late-'60s. And she asked me why I would not run a defense that he was so successful with at the University of Minnesota? So we implemented it.”

Presumably he wouldn’t tell his mother I told you so, though he could.

“We gave up too many threes,” Eric Musselman said. “I thought our man-to-man was much, much better than our zone. I wasn’t very happy with the zone. But you know what, it gives us another tool in our tool box to go to if we need it.”

Richardson always kept man to man in his plan, but upon developing his own style coaching undersized Bowie High School teams in El Paso, he incorporated it with a variety of zones and presses morphing into his “40 Minutes of Hell."

Sutton generally coached the style of his mentor, but not always.

He zoned with opposition inbounding on Arkansas’ end and occasionally zoned, usually effectively, to change pace or if the Hogs were foul troubled.

While it may not happen today against North Texas, don’t be surprised if some time Eric Musselman feels in the zone to re-book 33.9.