Ending season with payoff not crazy 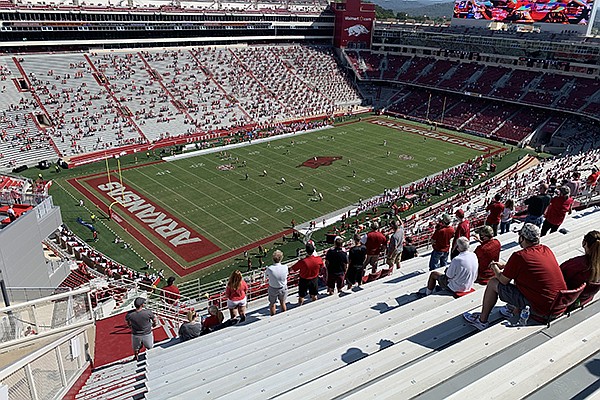 The crowd is shown at kickoff of Arkansas' game against Georgia on Saturday, Sept. 26, 2020, at Reynolds Razorback Stadium in Fayetteville. The crowd size was limited to 16,500 due to covid-19-related restrictions.

On the surface, it seems like a crazy idea.

But it could help the SEC get this season completed, even if it is amended.

It seems obvious that one of the goals of the 10-game SEC schedule was to get each team five home games. To put it another way, five small paydays.

With attendance limited to about half of what a San Jose State game would attract to Fayetteville, revenue has been reduced drastically every time the gates to Reynolds Razorback Stadium open. It is still considerably more than when the gates are closed, though.

It has been estimated most Power 5 schools will lose in the neighborhood of $35 million to $50 million this season.

Another problem is the longer the season goes, the more players and coaches are getting covid-19. This is the worst of times for the virus. More games are being postponed each week.

As of now, the day of the SEC Championship Game on Dec. 19 may include other conference games just to get 10 in the books.

Arkansas is one of the schools that closes the season at home with a much needed payday, and this one is against Alabama on Dec. 12.

Why doesn’t the SEC give Alabama and Arkansas the option to cancel the game and have the Crimson Tide write a check for what Arkansas would have made?

First and foremost, the risk of more virus cases would be diminished. Secondly, it would allow Alabama some time to prepare for Florida in the SEC Championship Game.

The LSU at Florida game slated for Dec. 12 would have the same option without paying out any money. It also would save the Tigers a boatload of travel expenses.

Granted, Razorback fans may not warm up to that idea because hope springs eternal of an upset of the mighty Crimson Tide, who will be favored by about 30 points.

But Razorback fans always have put what is best for the program first. If the SEC endorses canceling just those games and the Hogs get paid, it could be best for everybody involved during a pandemic.

Georgia, Ohio State and Penn State have said they are expecting to lose $50 million this football season.

That’s some heavy lifting for everyone.

Arkansas athletic director Hunter Yurachek has used a scalpel to slice the budget.

There have been more than 20 employees take early retirements. Some jobs have not been filled. Salaries and travel expenses have been reduced. There are other measures that have been taken to reduce the $120 million-plus budget for the 2020-21 seasons.

What hasn’t happened is the elimination of even one sport. The Arkansas student-athlete has remained one of the top priorities during these financially depressed times.

The UA has even asked for donations from its fans, a love offering, to continue to take care of the athletes.

There is a light at the end of the pandemic tunnel.

Vaccinations are coming. Not as fast as we want or need, but they are coming. By most accounts, athletics should be closer to the old normal in the summer than what we’ve experienced the past nine months.

If getting to the end of this football season without more interference from the virus means canceling one Arkansas game, then it might be best for the program and the SEC.

Of course, that means Bama pays the Razorbacks to create a win-win situation. Arkansas gets paid, and the Crimson Tide and Gators get an extra week for the SEC Championship Game.