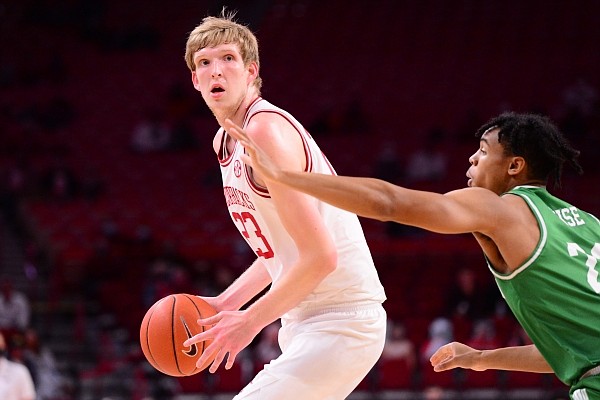 Arkansas forward Connor Vanover looks to make a pass during a game against North Texas on Nov. 28, 2020, in Bud Walton Arena in Fayetteville.

FAYETTEVILLE — Here are five takeaways from Arkansas’ first two games of the 2020-21 season against Mississippi Valley State and North Texas:

Connor Vanover was better than expected

One week ago, Razorbacks coach Eric Musselman said 7-3 forward Connor Vanover was playing catch-up in a few areas as the season opener neared because he missed nearly three weeks of the preseason with an illness. If what we saw from Vanover last week was him playing catch-up and getting back in the swing of things, Arkansas is going to be in terrific shape as he continues to get his feet underneath him.

Offensively, Vanover was terrific against Mississippi Valley State, pouring in a game-high 23 points on a hyper-efficient 8 of 11 from the floor. He added eight rebounds and three blocks, too, for good measure. He was the story of the Razorbacks' opening night.

On Saturday, the Little Rock native was outstanding again, but his impact was greatest on the defensive end. Vanover grabbed a career-high 16 rebounds and blocked six shots, becoming the first SEC player to reach those marks since Anthony Davis in 2012 against Kansas. Vanover was so dominant, Musselman said, that it was difficult to take him out of the lineup. He wound up playing a career-high 34 minutes.

In the first two games, Vanover hit 3 of 4 left-wing 3s, knocked down one from the right wing and finished all seven of his looks at the rim, which included a couple of putback dunks. In his 106 offensive possessions, Arkansas scored at a 1.19 point-per-possession clip, according to HoopLens, made 56% of its 2-point attempts and shot 42.1% from 3-point range.

And with Vanover not only blocking and altering shots but making opponents think twice about entering the painted area, the Razorbacks were stout defensively. Mississippi Valley State and North Texas collectively scored at a .68 PPP rate over Vanover's 107 defensive possessions.

The teams made only 33.9% of their 2-point attempts and shot 22.9% from 3-point range. All in all, Arkansas outscored its first two opponents 126-73 with Vanover in the lineup. As the weekend came to a close, he was ranked No. 5 in the country, according to KenPom analytics, in block rate at 17.8%. Vanover, impressively, was only whistled for two fouls in his 52 minutes last week. That is encouraging.

Moses Moody was inefficient, but he will get going

True freshman guard Moses Moody averaged 13.5 points in the first two games of his college career, and he left quite a few points on the table. Two games is an incredibly small sample size to analyze, so this is not greatly concerning entering December, but he struggled a bit scoring from the field.

Charting each player's shots following each game, it became evident fairly quickly that Moody, uncharacteristically, was having his troubles finishing at the rim and missing close-in looks that he typically makes with ease. In the season opener, nerves probably played some role in him getting 2 of 5 shots at the rim to fall.

Then, on Saturday, Moody missed his first two layups. He finished the 69-54 win over North Texas 1 of 4 at the rim. It is not likely the talented freshman continues this trend, but it was interesting. As was his 3-point shooting. Moody was 1 of 2 from deep in both the left and right corners and 0 of 6 from the left wing.

Musselman is not concerned at all. Moody is too good of a shooter to see his percentages remain where they are now. To his credit, he was effective in drawing contact and working his way to the free throw line, where he knocked down 15 of 16 attempts. Again, it is very early, but you have to like the fact Moody is drawing 7.8 fouls per 40 minutes played.

He will get going offensively sooner rather than later and his shot will begin to fall. And when that happens, Moody will show everyone why his name is appearing on 2021 NBA mock drafts.

Against Mississippi Valley State and North Texas, the Razorbacks totaled 36 assists, including 26 in the season opener. JD Notae, the transfer guard from Jacksonville, led the way with seven assists vs. the Delta Devils, and Jalen Tate, a graduate transfer from Northern Kentucky, added six more. The duo then accounted for five of Arkansas' 10 dimes on Saturday.

While those two did a terrific job setting up teammates for scores, essentially every player on the roster played a role in getting others involved offensively. Ten players tallied at least one assist in the two games. Here is a breakdown:

In recording the 36 assists, there were 27 different assist-scorer combinations. Notae-Vanover was the most common combination. Notae found the forward for scores three times, generating eight points. Seven other pairings linked up for buckets twice.

As familiar and in sync as Notae and Vanover are with one another, I expect them to stay toward the top of the assist-scorer leaderboard this season.

JD Notae can get anywhere he wants off the bounce

During the preseason, Musselman talked a number of times about needing to figure out who the Razorbacks can lean on in late-game situations now that Mason Jones and Isaiah Joe are no longer options 1 and 2. Notae seemed to be a likely candidate given his innate ability to generate a shot no matter what is being thrown at him defensively.

Last week, Notae had very little trouble getting to his spots on the floor off the bounce. He used angles to slip by defenders attached to his hip, euro steps, step throughs and a lethal shot fake on the perimeter that consistently pulled at least one player off his feet. That craftiness was a joy to watch.

Over his 95 offensive possessions, the Razorbacks scored at a sizzling 1.36 PPP clip and connected on 71.8% of 2-point looks. His creativity and ability to break down defenses is a key reason for those healthy numbers.

Through two games, he is drawing 6.7 fouls per 40 minutes played, which is second on the team only to Moody. The good we have seen from Notae certainly outweighs the bad. He just turned in a pair of very solid all-around games, but he must remain engaged and play with great intensity on both ends of the floor. Musselman thought Notae was a bit nonchalant against North Texas, and that led to his three turnovers.

Also, an underrated part of Notae's game is rebounding. He finished with two offensive rebounds in each game and grabbed seven defensive boards. Some players have a knack for judging whether a shot will miss short, long, left or right and working themselves into advantageous spots to grab that miss, and Notae is certainly one of them.

To this point, he has rebounded 8.3% of Arkansas' misses when on the floor, according to KenPom.

I did not expect Notae to be a sixth-man type this season, but it may be a perfect fit for him. Sitting to begin games allows him to get a feel for the flow and identify where he can make a splash. And he absolutely packs a punch off the bench offensively. He can really, really score and pour it on in a hurry.

No season-opening slump for Desi Sills

Last week, Sills knocked down more 3s than he did in seven games last November. It was well documented that the Jonesboro native got off to an ice-cold start from the perimeter as a sophomore, misfiring on 28 of his first 30 triple tries.

Entering Wednesday's game against Texas-Arlington, he is 3 of 6 and would be 4 of 7 if his toe had not been on the 3-point line on a shot from the left wing.

Given the way Sills attacked the summer months after Arkansas' 2019-20 season was cut short, I got the sense we might see a more consistent player on the offensive end. Minus a couple of unforced turnovers against North Texas, that seems to be the case. Sills has been very selective beyond the arc and does not appear to be pressing at all.

And, as expected, he remains every bit as aggressive and fearless attacking the rim. Sills (8) is second on the team in scores at the rim, trailing only Smith, who has 10 on 17 attempts. Vanover has seven.

Sills' leadership has been evident, too. He has been shown numerous times during game broadcasts communicating with teammates and directing traffic on both ends. It is very early, but we could be seeing the guard truly coming into his own and taking another step forward as a player.