Pittman: Arkansas to be 'pretty close' to full strength vs. Missouri 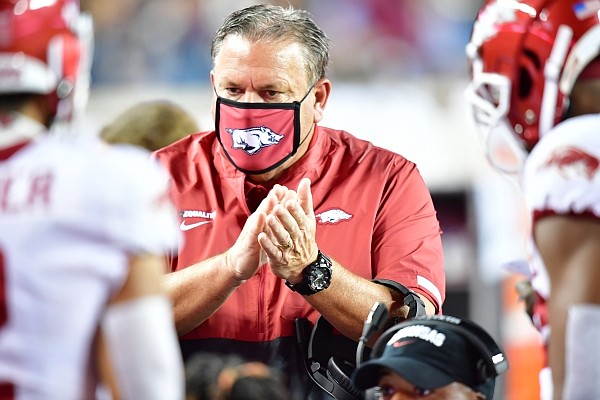 Arkansas coach Sam Pittman claps on the Razorbacks' sideline during a game against Texas A&M on Oct. 31, 2020 in College Station, Texas.

FAYETTEVILLE — Arkansas coach Sam Pittman anticipates the Razorbacks’ roster numbers to be much improved for this weekend’s scheduled game at Missouri.

Arkansas, which did not travel to face the Tigers in Columbia, Mo., on Nov. 28 due to covid-19 protocols that left the Razorbacks without enough players to satisfy SEC roster requirements, is expected to have most of its roster available for Saturday's scheduled 11 a.m. kickoff.

“Our testing went well (Sunday), and between injuries that we had and the covid, we feel like we’re going to be pretty close to full speed,” Pittman said Monday during a Zoom conference with reporters.

The Razorbacks had 56 scholarship players available in their 27-24 home loss to LSU on Nov. 21. They were especially thin along the defensive line, playing without at least six regulars for unspecified reasons.

Pittman is hopeful those players — Julius Coates, Isaiah Nichols, Zach Williams, Dorian Gerald, Xavier Kelly and Eric Gregory — will be able to factor into the game. In their absence, Mataio Soli and Taurean Carter started alongside team captain Jonathan Marshall.

“We think we're going to be able to get them all back,” Pittman said. “We have two more tests, but (I am) assuming all of that goes well. And I think that's big. Obviously, we need more size on the field and things of that nature.

“The guys who got to play (vs. LSU) are going to be better players when their number is called again.”

Pittman added that he feels "pretty good" about offensive lineman Beaux Limmer being available this week. Limmer, a redshirt freshman who began the season as the starting right guard, has not played in Arkansas' last two games. He was present but not in uniform for the LSU game.

Right tackle Noah Gatlin is also undergoing unspecified testing this week, Pittman said, and his status for Missouri is uncertain. He has not played since Oct. 31 at Texas A&M. Gatlin started the first five games.

For players returning from quarantine, conditioning is not a concern for Pittman given that they are able to go through individualized workouts while away from the team.

“To be honest with you, we’ve been dealing with it all year, so just a few more now, obviously,” Pittman said. “But I think we’ll be OK. We’re going to do business as usual this week. If I feel like at the end of practice we haven’t had a spirited practice or that we need a little bit more conditioning, we’ll get that in early in the week.