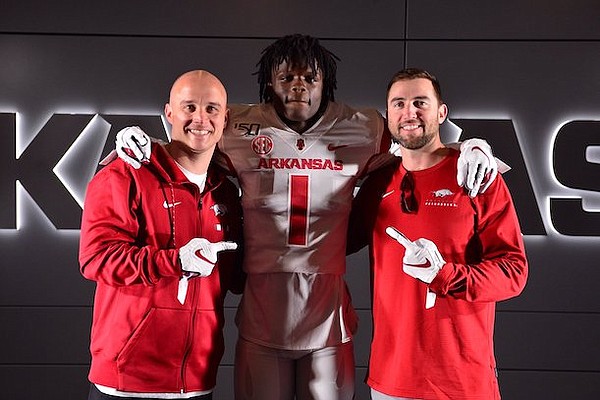 FAYETTEVILLE — It appears that 19 of Arkansas’ 20 pledges in its 2021 class are planning to sign early and at least eight are scheduled to arrive in Fayetteville in January as early enrollees.

The Razorbacks are also hoping to add another prospect before the December 16-18 early signing period with Arkansas head coach Sam Pittman excited about the possibility of getting so many letters of intent early instead of waiting until Feb. 6 – the traditional national signing date.

"I think any time that you have (an) early signing date - and obviously you like who you have or you wouldn’t have accepted their commitment - it’s big to get it early. It's big to get it in December,” Pittman said Monday during a Zoom conference with reporters.

Doing so would allow Pittman and his staff to gauge how many transfers they want to add to a 25-player class that will also include Oklahoma wide receiver transfer Jaquayln Crawford, who is redshirting and practicing with the Razorbacks this season.

“Once you get them on the dotted line, you can go, ‘Well, are we going to save some of these for some transfers or are we going to continue chasing after another player at the same position?” Pittman said. “We obviously like who we have, so we hope, like I am sure everybody who has commitments, that they will sign on Dec. 16.”

“I’m figuring that out currently,” Little said. “I’m trying to graduate early in January, but I don’t know if it will happen quite yet.”

“I will most likely sign in February and enroll in May,” Stephens said.

Arkansas is also in the final five for Atlanta (Ga.) Tri-Cities defensive tackle Cameron Ball (6-5, 295), who plans to announce his decision on Dec. 16. He is down to Arkansas, Georgia Tech, Tennessee, Arizona State and Illinois.

The early enrollees, who have all confirmed their intentions, would be eligible to go through spring practice, something that the covid-19 pandemic wiped out this year.

“We are certainly hopeful that we can get that class figured out,” Pittman said. “We have several guys coming in in January and that would be huge for spring ball, assuming we will be able to have spring ball.”

Arkansas will find out Friday if it is the choice of St. Louis (Mo.) University High junior safety Issac Thompson (6-1, 192), who will visit Fayetteville on Wednesday.

The Razorbacks, Missouri, Florida and Michigan and Texas are among the teams he is still considering.