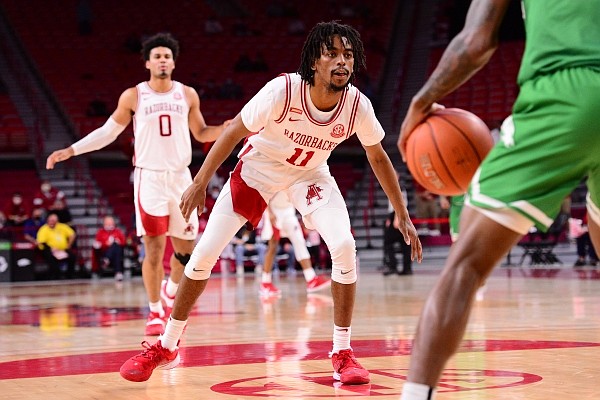 Arkansas guard Jalen Tate defends a North Texas player during a game against the Mean Green on Nov. 28, 2020, in Bud Walton Arena in Fayetteville.

FAYETTEVILLE — Arkansas forwards Connor Vanover and Justin Smith were undoubtedly the headliners in the Razorbacks’ 69-54 win over North Texas on Saturday.

Vanover became the first Southeastern Conference player to grab 16 rebounds and block six shots in a game since former Kentucky star Anthony Davis in 2012, and Smith finished with a game-high 18 points and three times flashed a much-improved jumper.

But graduate transfer guard Jalen Tate, in the starting lineup for the second consecutive game to begin his Arkansas career, was something of an unsung hero defensively in the win. His final stat line — 2 points, 4 rebounds, 2 assists, 3 turnovers, 1 steal — does not jump off the page, but he was invaluable in the eyes of coach Eric Musselman.

“Jalen Tate does stuff that probably is not going to show up in the box score,” Musselman said Monday. “First of all, the defense that he played on (Javion Hamlet) the other night was phenomenal. You’re talking about a conference player of the year.

“He basically took that particular player semi-out of the game with only four attempts shooting the ball.”

Hamlet was limited to just 5 points on 1 of 4 from the floor against Tate and the Razorbacks, snapping a streak of 13 consecutive games scoring in double figures dating back to last season.

Saturday was only the second time in Hamlet’s career he made only one shot in a game.

Arkansas’ offense was certainly sluggish in Tate’s time on the floor against the Mean Green, scoring .78 points per possession, according to HoopLens, over 32 possessions. But the Razorbacks’ defensive numbers with him in the lineup were exceptional.

North Texas scored at a .52 PPP rate in Tate’s 33 defensive possessions. The Mean Green shot 25% on attempts inside the arc, 16.7% from 3 and committed nine of their 16 turnovers in that span. Vanover’s presence, without question, was a factor in those figures, but Tate played a key role as well.

“That’s what Jalen Tate does,” Musselman added. “He was a great defender at Northern Kentucky, and obviously his length at that point guard position … I thought his defense on Hamlet was phenomenal.

“He’s going to rebound his position and he’s going to make people shoot over a long, extended arm.”

On the offensive end, Tate has opened the season just 3 of 8 on 2-point attempts, including 3 of 7 in the lane. Musselman, though, is not too concerned about Tate’s offense. He labeled the guard an "opportunistic scorer."

After two games, he is second on the team with eight assists, trailing only JD Notae (10). And he has assisted on 24.1% of Arkansas’ scores when on the floor, according to KenPom analytics.

“Certainly that is a really, really important facet for any point guard.”