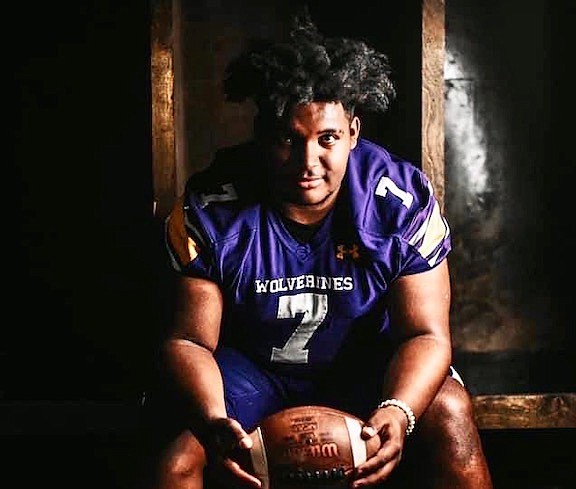 FAYETTEVILLE — The unbeaten football program in Vian, Okla,, has a lot of the ‘Wright’ stuff going for it on both sides of the ball this season.

Arkansas defensive tackle pledge Solomon Wright (6-1, 270 pounds) had eight tackles, including five tackles for lost yardage, and also had a fumble recovery as the Wolverines' 58-7 victory over Roland on Friday.

Vian limited the Rangers to minus-48 rushing yards.

The only thing that Class 2A top-ranked Vian (5-0) and head coach Gary Willis had to be concerned about was 14 penalties for 112 yards.

“The penalties are something that bother you and stick with your and you come in here and preach to the kids about them,” Willis said, “and they look back at you like, 'But Coach, we won by 60 points,' or whatever it was.

“You tell them it is going to matter later. I wish we had been cleaner, but you’ll take it because their effort was good. We flew around and hit people so we’ll take it.”

Solomon Wright, who chose Arkansas over Texas Tech Oklahoma State, Missouri and others, has 31 tackles, 14 tackles for lost yardage, 3 sacks and 2 fumble recoveries in 4 games.

He missed the season opener at Gravette when his family was quarantined due to covid-19.

“His explosion, his hands, his get off, his steps, his punch off the ball are really, really good,” Willis said. “I have done this a long time. He is as good as anybody I have seen at the high school level and that includes any classification.

“His effort is unreal. As you saw tonight he was running sideline to sideline from the position.”

Solomon Wright is the son of former Oklahoma State and six-year NFL player Kenyatta Wright, who now is an assistant at Vian.

While Solomon Wright isn’t tall, he jokes he’s already low in position, ready to make plays as he did last season when he had 124 tackles, including 14 sacks and 51 stops for lost yardage.

“They always say get you pad level lower. Well, I have already got it lower, so I’m good to go because that’s where I already am,” Solomon Wright said with a laugh. “Some people overlooked me because of my height, but I make plays and that’s what matter’s most.”

That is a mindset his father has passed on to him.

“I told him, I’ve told all my kids that a lot of times coaches want this prototypical kind of guy to play a position, but you go to a college practice and they are always saying ‘get your pad level down," Kenyatta Wright said.

“I’ve told him that what they can’t coach is your get off, your speed, your tenacity and your desire to get to football. I said, 'You work on those things and keep doing those things and any coach can use those tools to make you into a better player.'"

“Man they recruit the family,” Kenyatta Wright said. “It is something that we did not see in some of the other programs that recruited him. Arkansas has a great model of recruiting the families, including the wife, my other kids. They made all of us feel real comfortable.

“And with Coach Pittman and Coach Odom both being from Oklahoma, and from what everybody from Arkansas says about them, I am real excited to have him playing for them.

“I am really excited for him to be under the tutelage of Coach Odom, who I think is a great defensive coordinator. It really excites me because Coach Odom thinks he can play multiple positions. That is what we are trying to do with him now to see what it fees like in the course of a game to play a different position.”

Willis thinks Arkansas got a steal in Wright, who was originally committed to Texas Tech before flipping to the Razorbacks.

“Arkansas is not hung up on an inch or two of height, and Texas Tech wasn’t either,” Willis said. “He can play and I think he is going to help them right away.”

Wright is one of 19 players committed to the Razorbacks' 2021 class. San Antonio Cornerbook Christian quarterback Lucas Coley heads up group texts with the commits.

“What is awesome about that is these guys talk about the future together as a family when they go there and sticking together,” Kenyatta Wright said. “(Coley) has been the ringleader in that and I love following him on Twitter.

“I think that group is going to be pretty special in a couple of years down the road.”

Jayvn Wright has piled up just under 1,000 yards rushing and 24 touchdown this season.

“He is good,” Willis said. “Javyn has got a few D-1 offers from the academies as well as Western Illinois and some small schools like that and several D-2 schools. But we think it is getting ready to blow up for him. He has played five games and already has three or four games of over 200 yards rushing, and sometimes he is just playing a half. He can go.”

Vian was 12-2 last season while getting to the Class 2A state playoff semifinals and has done well with covid-19 guidelines so far in what it hopes is a state championship season.

“It’s been crazy with the covid and the crazy world we have been living in, but the boys have accepted wearing a mask, trying to spread out on the sideline,” Willis said. “Vian lives and breathes for football so everybody in the community will do about anything to keep it going.”