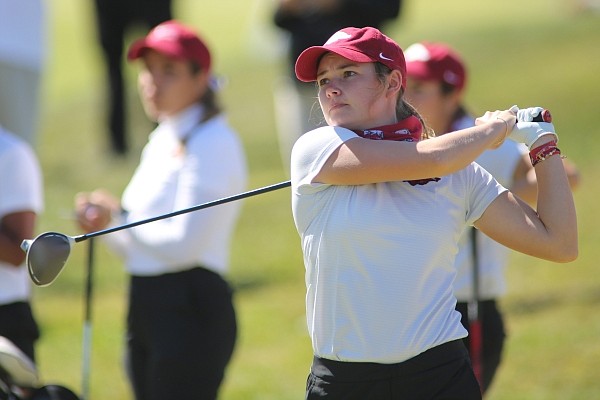 Arkansas golfer Brooke Matthews watches a tee shot on Monday, October 5, 2020, in the inaugural Blessings Collegiate Invitational at the Blessings Golf Club in Johnson. The golf tournament brought together all 14 men's and women's golf teams from the SEC to play in the 54-hole three day tournament. Check out nwaonline.com/201006Daily/ and nwadg.com/photos for a photo gallery.

JOHNSON — Both University of Arkansas golf teams are off to fast starts in their first home tournament of the fall, notably the women’s team that sits atop the leaderboard thanks in large part to a record-breaking round by junior Brooke Matthews.

All 14 SEC men’s and women’s golf teams are competing in the Blessings Collegiate Invitational at Blessings Golf Club. The Golf Channel is also carrying all three days of competition live.

Matthews, the former Rogers standout, was the star for the Razorbacks on Monday as she posted a 5-under 67, tying LSU’s Ingrid Lindblad after one round.

Matthews’ scorecard set the record for best single-round score at The Blessings in program history, surpassing former Razorback Maria Fassi’s 68 in the spring of 2019.

The 67 was also Matthews' personal-best round in her college career.

“I got off to a little bit of a tough start but stayed steady, stayed patient, had some putts go in,” Matthews said. “I knew I was hitting it well. I felt good about it.”

Matthews has been on a tear since the spring season ended in March.

“I definitely gained some confidence (this summer),” Matthews said. “I saw some really good things going with my game. I had about a month to work on some things I needed to improve on.”

The co-leaders will carry a four-shot lead into today’s second round.

Matthews said Monday’s weather was a contributing factor to the low scores.

“The conditions were tough, a little windy, the greens were firming up and were really fast. It was playing really nice though, the course is in amazing shape,” Matthews said.

The Arkansas women sit four strokes ahead of second-place LSU heading into today’s second round.

On the men’s side, which finished up in almost darkness Monday, Arkansas junior Segundo Pinto fired a two-under 70 to join a long list of players tied for fourth.

Tennessee built an eight-shot lead by firing a 280 on Monday, led by Hunter Wolcott, who leads by one shot in the medalist category with a 68. Kentucky’s Alex Goff and Bryce Lewis of Tennessee are tied for second, one shot back after opening 69s.

Arkansas is sitting in sixth after a 5 over.