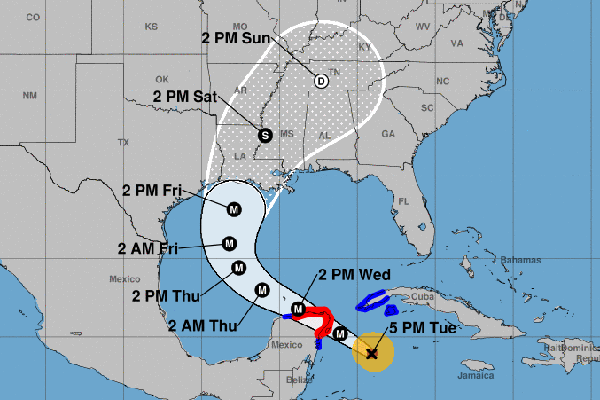 This image provided by the National Hurricane Center shows the projected path of Hurricane Delta, which is projected to make landfall along the U.S. Gulf Coast sometime Friday or Saturday.

FAYETTEVILLE — The Southeastern Conference says it is monitoring the movement of Hurricane Delta, which is expected to make landfall along the U.S. Gulf Coast sometime this weekend and could impact games scheduled in the region.

An advisory from the National Hurricane Center on Tuesday states the category 4 hurricane is expected to make landfall in Louisiana late Friday or early Saturday. After it makes landfall, the storm is projected to move northeast across Mississippi and Alabama.

That path could affect multiple SEC games scheduled Saturday, including Missouri at LSU and Alabama at Ole Miss. Forecasters cannot rule out the storm making landfall farther east, which would have the potential to affect Arkansas’ game at Auburn.

The Razorbacks' soccer team is also scheduled to play a game at Alabama on Sunday afternoon.

“We remain in contact with Auburn and the SEC as we monitor weather forecasts to assess any potential impact on the weekend,” Arkansas athletics director Hunter Yurachek said in a statement Tuesday when asked only about the football matchup. “At this time, there have been no alterations to the plan to play the game as scheduled.”

Gary Goggins, a meteorologist for the National Weather Service in Birmingham, Ala., said the main threat for the Razorbacks’ football game right now is rainfall and severe weather, but cautioned forecasters would have more confidence Wednesday about where the hurricane will make landfall. NWS Birmingham is the forecasting office for Auburn.

“The track is forecast by the National Hurricane Center to approach the Louisiana coast…but the cone actually stretches as far west as the Louisiana-Texas state line, and also includes the Alabama beaches (to the east),” Goggins said.

Rainfall amounts are expected to be higher in west Alabama, Goggins said, than in the eastern part of the state where Auburn is located near the Georgia state line.

“Of course if that (hurricane) track falls more on the eastern side of that cone, the rainfall forecast will increase significantly as it comes in,” Goggins said. “The main thing we’re looking at right now is rainfall and the possibility of severe weather, as tropical systems sometimes produce those spin-up tornadoes.”

“We are aware that there's a great possibility it'll rain,” Pittman said. “So, we're starting (Monday) in practice throwing and catching and handling and snapping wet balls, and we will do that throughout the week."

The SEC is no stranger to hurricanes threatening games. At LSU, Hurricanes Katrina and Rita in 2005, and Matthew in 2016 caused the Tigers to cancel, postpone or move football games to other venues.

LSU is not alone in having to adjust its schedule because of hurricanes. It is an ever-present threat early each season to programs located in coastal states, as are nine of the SEC's 14 teams.

In 2015, flooding associated with Hurricane Joaquin forced a South Carolina home game against LSU to be moved to the Tigers’ home stadium. Two years later Florida canceled its home opener against Northern Colorado because of the approaching Hurricane Irma.

Even Arkansas has had a game rescheduled due to a hurricane. The Razorbacks’ 2008 game at Texas was postponed two weeks because of Hurricane Ike.