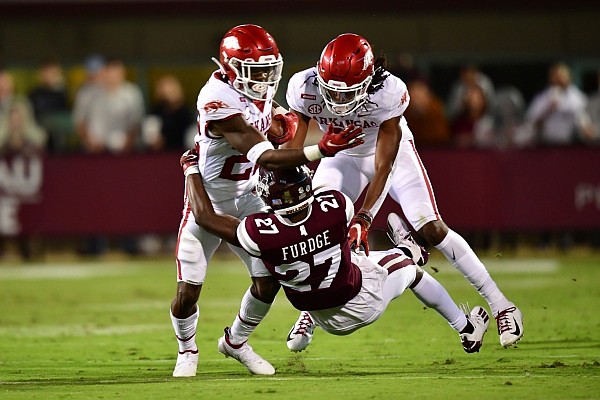 FAYETTEVILLE — Certainly it helped playing against just a good defense instead of the nation’s best.

But even as Arkansas’ defense mostly carried the night, the Razorbacks’ offense did improve. It contributed to last Saturday’s 21-14 victory over the then 16th-ranked Mississippi State Bulldogs in Starkville, Miss. following Arkansas’ Sept. 26 season-opening 37-10 loss to No. 4 Georgia in Fayetteville.

But it must improve significantly, Arkansas Coach Sam Pittman surmised, against the 13th-ranked Auburn Tigers awaiting Arkansas Saturday in Auburn, Ala.

“Obviously, a little hard on the offense opening up with Georgia,” Pittman said in review. “I mean, that’s a different animal right there. Certainly against Mississippi State, we had our ebbs and flows.”

“We just have to be way more consistent,” Pittman said. “We have players that can get open, we have a line that can block, we just have to win first down and we haven’t been doing that.”

Offensive coordinator Kendal Briles strives to install the uptempo offense from which he received national acclaim coordinating attacks at Baylor, Houston, and Florida Atlantic. His offense flowed one fast series rendering the Bulldogs on their heels in disarray.

Who frets time of possession when your defense’s game-opening series pick-six provides the opposing offense two series before your offense touches the ball?

Pittman didn’t then. He did after the Bulldogs’ 7-play series, interrupted by nickel back Greg Brooks’ interception/69-yard touchdown return, came a methodical Mississippi State 15-play, 75-yard touchdown drive followed by an Arkansas three and out minute.

“We have to get started at some point, you know?” Pittman said. “The defense picked it and scored and then (after Mississippi State consumed 7:45) we get the ball back and we’re 3-and-out. “I mean, we just can’t do that. Our openers have to get us some success.”

Quarterback Feleipe Franks, no turnovers and two touchdown passes against Mississippi State, has achieved passing and team command success and proved an if need be willing runner.

The line still hasn’t sprung Preseason All-SEC running back Rakeem Boyd (injured during the first half in Starkville) to capabilities.

“Our timing is still a little off on offense,” Pittman said. “We were better Saturday than we were the week before. So that’s encouraging. But we have to run the football and we’re just not doing it at our standard yet. But I believe that we have the players to do it and we’re going to work extremely hard on that this week.”

Belief seems gradually growing within the offense but a stern test looms.

“It’s Auburn,” Pittman said. “And when you go play Auburn you’re going to play one heck of a defense.”