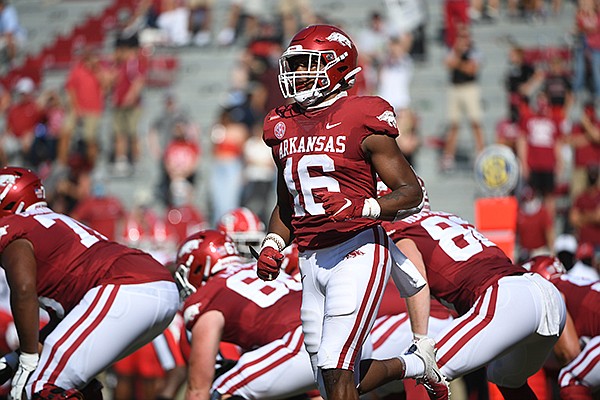 Arkansas receiver Treylon Burks goes in motion during a game against Georgia on Saturday, Sept. 26, 2020, in Fayetteville. (AP Photo/Michael Woods)

FAYETTEVILLE — Two of Arkansas' starters who were injured at Mississippi State have made positive strides in practices this week.

Razorbacks coach Sam Pittman said Thursday that sophomore receiver Treylon Burks is "improving" and redshirt junior cornerback Montaric Brown is "getting better" ahead of the Razorbacks' trip to No. 13 Auburn this weekend.

Burks and Brown left the Week 2 win in the first half with knee and upper-body injuries, respectively. Burks caught one pass for 10 yards and Brown made three tackles, including a tackle for loss, before leaving the lineup.

On his weekly radio show on Wednesday, Pittman noted that the staff is unsure whether starting running back Rakeem Boyd will be available against the Tigers. Boyd suffered a lower-body injury in the first half at Mississippi State as well and has been wearing a walking boot.

Pittman feels good about the Razorbacks' running backs group if Boyd is limited or unable to go.

"We’ll have to wait and see on Rakeem," he said Thursday. "But I’m very confident (in Trelon Smith). He’s a hard runner, nice blocker. I mean, the guy plays hard. More importantly, our team believes in him.

"So if that’s the case then we’ll be just fine with him."

If Boyd cannot play, Smith becomes the assumed starter, and true freshman Dominique Johnson and redshirt freshman A'Montae Spivey, who did not travel with the team last week, will figure more into the game plan. Smith caught five passes and rushed for 48 yards against the Bulldogs.

Asked who he feels most confident in behind Smith, Pittman said snaps for Johnson and Spivey may be dictated by the field conditions.

"If it's a muddier game it might be better for a bigger guy, which would be Dominique," he said. "I'm not positive who we'd go with first. I'll know Saturday morning. We'll discuss it and decide. I think you'll see all three of them play, assuming Rakeem can't.

"And if Rakeem can, then you'll probably see a couple of them."

Defensive end Julius Coates, who also did not travel to Mississippi State, is expected to return this week. But whether he will re-join the starting lineup is up in the air.

Eric Gregory, who has six tackles and one sack this season, is listed as a potential starter at Coates' position, according to this week's depth chart.

"We’ve got him as an ‘OR,’ so I think we either start him or somebody else will start," Pittman said.