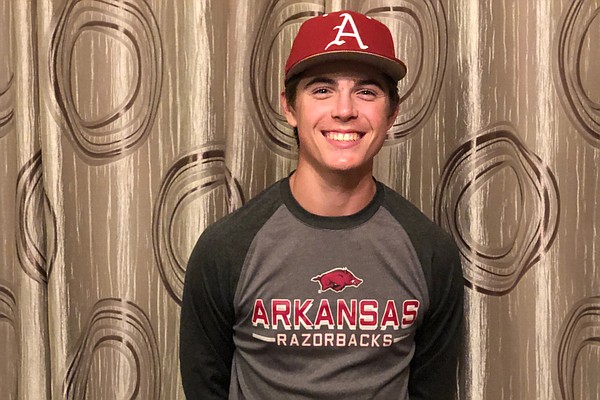 With the college season beginning in February, games are typically played during the warmest part of the day – 3 p.m. And usually, that means school-aged children miss the fanfare of Opening Day.

But not Ross Felder.

The Razorbacks' first baseball commitment in the 2024 class has been to every home opener for as long as he can remember.

"It's actually his birthday," said Mike Felder, Ross' father. "So every Friday opening weekend we would take him out of school and take a couple friends and go, ever since he was little bitty."

The 6-0, 165-pound freshman from Springdale Har-Ber has seen great teams play at Baum-Walker Stadium, and now he wants to join one.

"It's always drawn me in, and I've just kind of wanted to experience it for myself and just be a part of it," he said.

A right-handed pitcher, Felder chose Arkansas over Tennessee. He played for the Arkansas Sticks over the summer and has joined some rare company.

In addition to his success with the Sticks, Felder is just the third freshman to make the Har-Ber varsity team. The other two are Arkansas freshman pitcher Blake Adams and Razorbacks 2022 commit Cooper Dossett.

"I just think that that's a really big honor to be able to carry on the legacy of Blake Adams and Cooper Dawsit," he said.

Felder has experience in unfamiliar situations. When he was 12, he was one of 18 players selected for Team USA. His team finished the season with a perfect 11-0 record, including a gold medal finish in the 2018 COPABE U-12 Pan-American Championships.

Felder was going to play for Team USA again this summer, but the covid-19 pandemic ended all Team USA activities this year.

Brewster believes Felder can lean on that experience and make an impact right away at Arkansas.

"As a kid that has played in so many unique environments, he's not going to be scared to go to LSU as a freshman or go on the road in Gainesville," Brewster said. "He knows who he is, he knows how to get people out. The situation and the circumstance are not going to change him because he knows what he's trying to do.

"And more times than not, he's able to accomplish what he's trying to do."

Felder throws a four-seam fastball, curveball and changeup. His fastball is consistently clocked at 82-84 mph, but that speed is expected to increase as he matures.

"The old rule of thumb is that you're going to gain 2 mph per year," Brewster said. "Under those principles, we think he's going to be a 90-92 mph arm with the ability to really locate."