By: Drew Watzke, Special to the Democrat-Gazette
Published: Thursday, October 8, 2020 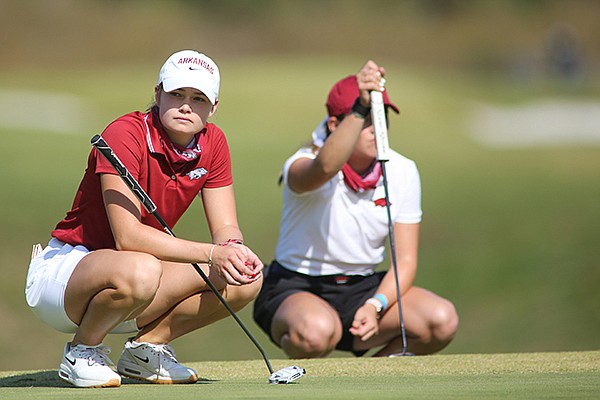 JOHNSON — Brooke Matthews stood over her ball and took a deep breath on the No. 18 green.

She steadied her putter and rolled in a 3-foot par putt to put an exclamation point on a dominating three-day performance both personally and by her University of Arkansas golf teammates at the Blessings Collegiate Invitational on Wednesday.

Matthews locked up the individual medalist title with a 1-over 73 that came after rounds of 67 and 66 to finish at 10-under 206 for the tournament, five shots ahead of Ingrid Lindblad of LSU, who shot 67-71-73-211. The Razorbacks also won the team championship with an 864, 18 shots better than second-place LSU.

“There are a ton of positives, not just for me but for the whole team,” Matthews said. “We stuck together amazingly, whenever somebody got down we were able to pick her up and just keep grinding it out until the end, and it showed.”

Razorbacks Kajal Mistry, Julia Gregg and Cory Lopez were all crucial to the Hogs’ title-clinching round, shooting rounds of 2-under 70, even-par 72 and 1-over 73, respectively. Mistry had an important three-hole stretch at holes 9, 10 and 11 where she recorded three consecutive birdies.

Sophomore Ela Anacona fired an 8-over 80 in the final round of play.

LSU inched to within four shots of Arkansas on the front nine, but the Razorbacks answered the call on holes 8-11 by posting a total score of 3-under par over that stretch. After that, the Hogs played steady, taking their pars and keeping all other teams out of reach.

“To do it at home, on television, for Mr. [John] Tyson, for the Blessings membership and for Razorback Nation, it’s all you could ask for as a coach,” Arkansas women’s golf Coach Shauna Taylor said.

The Arkansas men entered the day 14 shots back of first place but just three shots behind fourth place. The Hogs got off to a fast start, notching a combined score of 7 under through 12 holes and threatening to take the lead.

The Hogs ran into the difficult back half of the course and finished 1 over on the day, placing them in third for the tournament.

The 1-over scorecard by the Hogs was the best round of the day on the men’s side by three strokes.

“We had the mentality to move up the leaderboard,” Arkansas men’s Coach Brad McMakin said. “We wanted to shoot the low round of the day, and [our team] did a really good job today.”

Julian Perico shot a 1-under 71; Segundo Oliva Pinto and Manuel Lozada both scored 1-over 73s; Tyson Reeder notched an even-par 72; and Wil Gibson finished with a 3-over 75.

“Everybody played really good today,” Perico said. “We’ve been working our tails off. Every team in the SEC is great, so a third-place finish is pretty good.

“I think we have a good team, and I’m excited for the future. I think when we have our whole team back and have some depth in the spring, I think we can win the national championship.”

The strong results for Arkansas could be a sign for a successful 2020 fall and 2021 spring season, McMakin said.

“I think we’ll definitely take this week as a positive,” he said. “This conference is really strong and having the competition is great. We got a lot of young guys in our lineup this week, and I think they did a really great job.”

Matthews, who starred at Rogers High School prior to signing with Arkansas, said the win was big, but there will be other challenges ahead.

“We’re going to have to be on top of our game every week,” she said, “but I’m excited to carry this momentum and keep it rolling.”