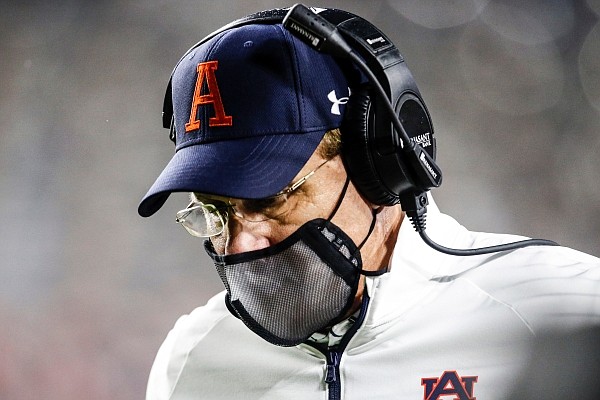 While the college football world will talk about a pivotal play late in the Arkansas-Auburn game on Saturday, Tigers head coach Gus Malzahn and his players were just all about surviving.

Bo Nix’s controversial fumble and would-be spike with less than a minute left in the game were reviewed and the ruling set the stage for Anders Carlson’s 39-yard field goal to lift No. 13 Auburn to a 30-28 win.

The boot kept Arkansas (1-2), who trailed 17-0 in the second quarter, from scoring a second straight upset over a top 20 foe after losing its previous 20 SEC games.

“Our guys stepped up and found a way to win,” Malzahn said. “Give Arkansas credit. They played with great effort and I thought they did a super job coaching, too. But we’re very happy to have this victory.”

Veteran NFL referee and NBC Sunday Night Football rules analyst Terry McAuley took to Twitter after the game with this explanation of the play involving Nix’s attempted spike to stop the clock.

“This is a backward pass,” McCauley tweeted with a video of the play. “A player from each team immediately continued to play. That would be considered continuing action and the ball is ultimately and clearly recovered by the defense. In my opinion, this should have been reversed and the ball given to Arkansas.”

Instead, Carlson, who had missed a 34-yarder with 2:38 let in the game, got a second chance to win the game after Arkansas had taken a 28-27 lead on Feleipe Franks’ 30-yard touchdown pass to De'Vion Warren with 5:29 left.

Carlson had made 10 consecutive field goals before pushing the 34-yard attempt wide right.

“It’s kind of funny, my perspective as the kicker,” noted Carlson, who was 3-of-4 on field goals Saturday. “My ball actually was kind of in the middle-right of the field goal post and it faded outside. So, just kind of double-checked the winds and was happy to hit a good ball the last ball, like I wanted to.

“Wild game. I was happy to end it that way, but credit to all the other guys. A big sigh of relief. Very blessed to be here.”

Malzahn said he wasn’t worried about Carlson missing two in a row.

“I just kind of gave him that look and gave him a fist bump,” Malzahn said. “He knows. He’s a great kicker, one of the best kickers in the country. You know, he was looking forward to that. You can see it in his eyes. We did a good job with the snap and the hold. It started to rain a little bit there, and our protection held up.

"Game-winning kick, you know, at home in the SEC — it doesn’t get much better than that as a kicker. That’ll help him moving forward, too.”

Nix said his team was simply focused on getting Carlson into field goal range after taking over on the Arkansas 45.

“We knew the task at hand,” Nix said. “We knew we had to go out there and get in field goal range. ... We felt really comfortable. We knew what yard line we had to get to.”

Nix, who was 17-of-28 passing for 187 yards and one touchdown and also rushed for 30 yards and another score, said he thought his spike went forward, but has to do a better job in that situation.

Auburn, which was manhandled 27-6 last week at No. 3 Georgia, moved to 2-1 with the win despite coughing up the 17-0 lead that included Jordyn Peter’s fourth career punt block, which turned into a first-quarter touchdown for the Tigers.

“I am extremely proud of our team to get a hard-fought SEC victory,” Malzahn said. “You look at the game and it started out where the weather was a challenge early and we blocked a punt for a touchdown and that was huge."

Missouri upset LSU and Texas A&M downed Florida on a crazy day in the SEC.

“A lot of times it is how you win and that’s what I told our team,” Malzahn said. “These SEC wins, especially this year, are not easy. You look around our league and our guys found a way to win.

"I think we can use that and it can help us later in the season.”

Nix said that the game meant a lot to offensive coordinator Chad Morris, who was fired after two years at Arkansas and 0-16 in SEC games.

“It was personal for us,” Nix said. “With the way things went down and the way the situation was when he came in, obviously (Morris) had this one circled for a while. We were really excited we got the win for him. He was extremely relieved, and it was a close one. They fought their butt off.

“I’m extremely, extremely fired up that he’s on my team.”

Auburn’s Tank Bigsby had 146 yards rushing on 20 carries. He rushed for 106 yards in the first half as Auburn piled up over 215 of its 259 yards on the ground before intermission.

“I think we had 200 yards rushing in the first half and what'd we have, 50 yards in the second half,” Malzahn said. “Give (Arkansas) credit.”