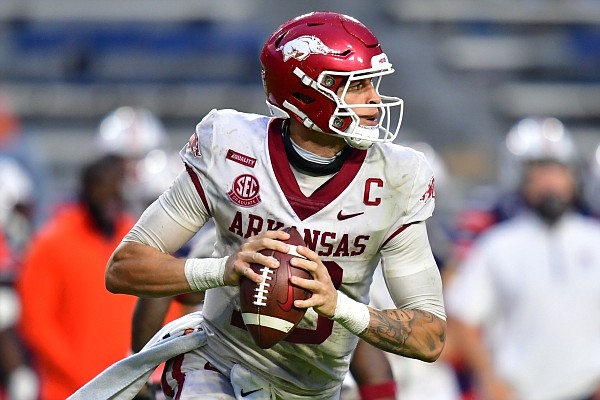 Arkansas running back Trelon Smith never saw panic in quarterback Feleipe Franks' eyes or a change in his demeanor.

It would have been easy to press and be overcome with frustration after the Razorbacks' offense went three-and-out on three of its first four possessions against No. 13 Auburn on Saturday.

In the first quarter, Arkansas recorded only 46 yards and was 0-for-4 on third down. The Tigers seemingly had an answer for each move the Razorbacks made early.

But as the game wore on, Franks looked like the savvy SEC veteran Arkansas was hoping he would be when he transferred from Florida. And he put his team in position to win its second consecutive game in league play.

In the controversial 30-28 loss to Auburn, he completed 22 of 30 passes for a season-high 318 yards and four touchdowns.

"Feleipe, man, he's a hell of a quarterback," said Smith, who totaled 159 yards of offense. "He's always the type of guy to come over on the sideline and motivate everybody to keep going, keep pushing, next play. He always tells us to forget about the (last) play and move on to the next play.

"He's a true leader on this football team."

Franks is providing Arkansas with something it hasn't received in years: quality play at quarterback.

On Saturday, he became the first Razorbacks quarterback since Brandon Allen in 2015 to pass for 300-plus yards and four touchdowns in a game. Franks is only the fourth Razorback to reach those marks since 2000.

Arkansas coach Sam Pittman said he was proud of Franks and the toughness he displayed throughout the game. He also ran the ball 15 times for 28 hard-earned yards.

"He ran the ball well, got some much-needed yardage, threw it well," Pittman said. "He got hit a few times in the run and obviously got sacked a few times. But he just gets better every week. I was really proud of him. I know he's banged up a little bit.

"But it'd be hard not to be proud of his performance tonight. He did a nice job."

Warren put together another big night with five receptions for 95 yards and two touchdowns - a 7-yarder in the second quarter and a 30-yarder in the fourth to put Arkansas ahead 28-27.

Woods' 4-yard scoring grab got the Razorbacks on the board in the second quarter, and Smith's pulled them within 20-18 in the third. Arkansas' offense began clicking as Franks fell into a rhythm.

After beginning the game 3 of 7 passing, he connected on 15 of his next 17 passes, three of which went for touchdowns.

His biggest throw of the game came on fourth-and-5 at the Auburn 41. Calmly he found Woods for 11 yards to convert, then, on the next play, found Warren in the end zone to put the Razorbacks ahead 28-27 with 5:29 to play.

Arkansas safety Jalen Catalon was impressed with Franks' performance and his leadership as the offense battled back from a 17-0 hole. His play inspired the defense, Catalon said.

"Feleipe is a baller. No matter what happens, I never see Feleipe get shook by anything," Catalon said. "He always has his head high and he's always motivating us to keep going no matter what the scenario is. It showed tonight. It's easy to get down with everything, but you saw that look in his eye that he was ready to go no matter what.

"You saw him string together some drives, which gave us, the defense, confidence to say, 'We've got a quarterback that's going to do his thing. Let's do our thing.' Before you know it, we're back in the game."

Franks finished with a quarterback rating of 206.4, the highest for a Razorback when attempting at least 30 passes since Allen (202.8) against Mississippi State in 2015.

"He did his thing, you know," Catalon said. "I wish there was a couple of calls that went our way toward the end to finish off the game, but it is what it is. I'm proud of Feleipe, and I'm glad he's our quarterback. I wouldn't want anyone else on our team."