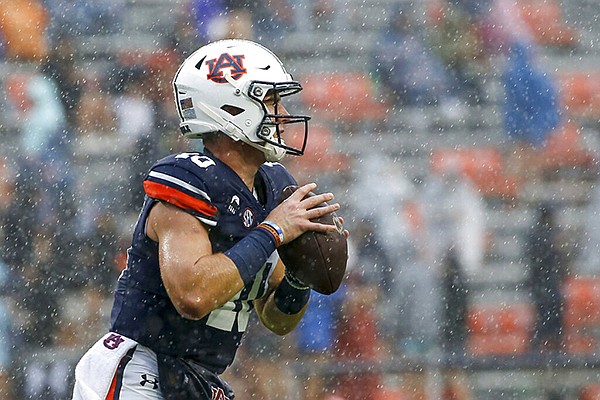 Auburn quarterback Bo Nix (10) warms up in before an NCAA college football game against Arkansas as the remnants of Hurricane Delta pass through on Saturday, Oct. 10, 2020, in Auburn, Ala.. (AP Photo/Butch Dill)

A controversial ruling by referee Jason Autrey was the difference in No. 13 Auburn escaping with a 30-28 victory over Arkansas on Saturday at Jordan-Hare Stadium.

A statement released by the SEC office late Saturday said there was “conclusive video evidence” Auburn quarterback Bo Nix threw a third-down pass backward in the final minute, but Arkansas was not awarded the ball because there was not an “immediate” recovery.

“Both the determination of a backward pass and the immediate clear recovery are required to reverse the ruling on the field under Rule 12-3-2-e-1,” the statement said.

The NCAA rulebook states: “If the ball is ruled dead and the replay official does not have indisputable video evidence as to which team recovers or does not have confirmation of the recovery by the officials on the field, the dead-ball ruling stands.”

With time winding down, Nix mishandled a snap, but picked up the ball and spiked it backward in an attempt to stop the clock.

As some Arkansas and Auburn players ran to recover the ball, officials blew their whistles to call the play dead, and Autrey dropped a flag for an intentional grounding penalty against Nix.

While Autrey and the in-stadium SEC replay officials reviewed the play, Arkansas coach Sam Pittman could be seen on the ESPN broadcast telling an official that Nix’s pass was backward and should be a fumble recovered by the Razorbacks. Arkansas safety Joe Foucha recovered the ball, but not until after the officials blew the play dead.

After multiple minutes reviewing the play, Autrey stated the call on the field stood and Auburn would be penalized with a 10-second runoff because it did not have any timeouts remaining. Arkansas could have used its final timeout to avoid the runoff, but elected not to do so.

The clock began running on Autrey’s ready-for-play whistle and Auburn kicker Anders Carlson made a 39-yard field goal with seven seconds remaining to give the Tigers the game-winning points.

During an interview on the Razorbacks’ radio broadcast after the game, Pittman was asked how the officials explained the play to him.

“They just said it was a fumble, a backward pass, but they blew the whistle before we recovered the ball so they couldn’t review it, I guess,” Pittman said. “That’s the explanation I got.”

"They provided an explanation consistent with what was outlined in their statement," Yurachek said in a statement posted to his Twitter account. "I expressed my disagreement and disappointment with the final decision. However, there is no further action to be taken and we will turn our attention to the Ole Miss game on Saturday.

"I am extremely proud of the effort of our football team. I appreciate your continued support."

On Twitter, veteran NFL referee Terry McAulay said he disagreed with the call on the field.

“That would be considered continuing action and the ball is ultimately and clearly recovered by the defense,” said McAulay, who is now a rules analyst for NBC’s NFL broadcasts. “In my opinion, this should have been reversed and the ball given to Arkansas.”

"To me this is a clear backward pass," Lemonnier said. "Replay should have reversed this and given Arkansas the ball."

FOX Sports rules analyst Mike Pereira also said he thought Arkansas should have been given the ball.

"Arkansas loses. They’re going to be upset. They have a right to be," Pereira said. "But it’s one of those (things) that the referee has a call to make that he has probably never seen in his lifetime, and he’s got to make it in real time.”

Arkansas safety Jalen Catalon said it was a tough way to lose.

"We thought it was a fumble, but sometimes the game doesn't bounce your way," Catalon said. "It's a tough one to swallow, but we've got swallow it, get back in the film room and get ready for Ole Miss next week."