State of the Hogs: SEC sticks it to Arkansas again 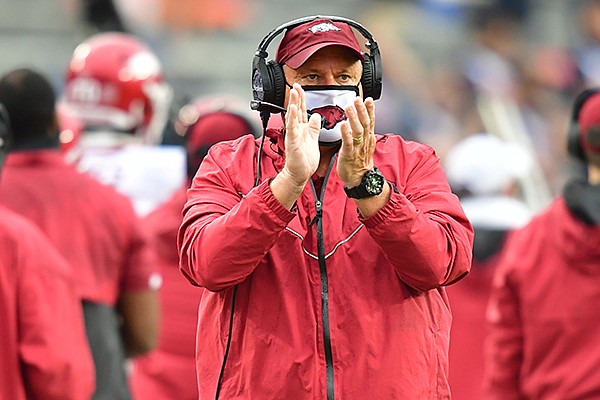 Arkansas coach Sam Pittman is shown during a game against Auburn on Saturday, Oct. 10, 2020, in Auburn, Ala.

AUBURN, Ala. — Someone in the SEC office assigned Arkansas the two SEC East powerhouses in August.

Adding Georgia and Florida to what was already a brutal schedule was a tough break for Arkansas coach Sam Pittman.

That wasn’t as bad as what happened to the first-year Arkansas coach at Jordan-Hare Stadium on Saturday. A backward pass by Auburn quarterback Bo Nix — mistakingly ruled an intentional grounding penalty — should have been a game-clinching turnover.

Ultimately, referee Jason Autrey said on the loud speaker that his call “stands” after the five-minute video review that probably was bounced all the way to the SEC home office in Birmingham. A play stands when there is insufficient evidence to confirm it or overturn it.

Pittman was told that the backward pass could not be a fumble because of an inadvertent whistle.

A celebration erupted on the Arkansas sideline as two officials explained the call prematurely to Pittman. Instead, Autrey provided a different explanation that eventually allowed Andres Carlson to boot a 39-yard field goal for Auburn’s 30-28 victory.

It brought back memories of the worst calls in Razorback history: Preston Watts in the Liberty Bowl, Horton Nstra in Texas Stadium against SMU and Marc Curles in Gainesville, Fla. Like those, Autrey and the SEC office made a horrific mistake.

That botched call wiped out a magnificent comeback that should have put the Hogs at 2-1 ahead of a home game against Ole Miss. Surely, they boarded a plane for home thinking they were robbed. Pittman has a tough job this week to get their mind back on playing hard, the key to solid play over their first three games.

Quarterback Feleipe Franks rallied the Razorbacks from a 17-0 deficit to lead 28-27 on his fourth touchdown pass, a 30-yard go route to De’Vion Warren with 5:29 to play.

Carlson missed a 34-yarder with 2:38 left, but the Tigers used timeouts on three Arkansas running plays to get the ball back with 2:06 left. They only had 45 yards to go because of a 35-yard punt out of bounds, plus a 5-yard penalty — the Razorbacks’ third of the game for not having seven players on the line of scrimmage during a punt.

Those special teams mistakes — and several others earlier in the game — seemed moot when Nix botched an attempt to spike the ball on third-and-1 at the UA 20-yard line. He dropped the center snap, then fired the ball into the ground as he was turned backward.

The ball bounded backward with both Autrey and his center judge blowing their whistles and signaling an incomplete pass. The ball bounced off the center judge as Arkansas players tried to scoop the ball. Razorback safety Joe Foucha recovered the ball after the whistles blew.

On his postgame radio show interview, Pittman said, “They just said it was a fumble, a backward pass, but they blew the whistle before we recovered the ball so they couldn’t review it, I guess. That’s the explanation I got.”

Around 15 minutes later in a Zoom call with the media, Pittman further explained, “I was told it was not a backward pass.”

Because of the intentional grounding call, there was a 10-second run-off from the clock to take the clock to 18 seconds. The Hogs perhaps could have declined the runoff.

As it was, they had only seven seconds left after a kickoff out of the end zone. There was a short completion and a lateral, but the Tigers swarmed the play before another lateral could be attempted.

It was a valiant effort from a team battered a week two victory at Mississippi State. Pittman said inside linebackers Bumper Pool and Grant Morgan were unable to practice in full pads during Auburn preparations.

“We never hit them,” he said. “Our tackling was not as good. I would say some of that was fine running by (Auburn running back) Tank (Bigsby) and maybe we were slipping off of him, too.

“We’ll get back to work and tackle better.”

Key Arkansas players missed the game with injuries. Tailback Rakeem Boyd and cornerback Montaric Brown did not make the trip. Wide receiver Treylon Burks tried to run in warmups, but was held out of the game.

After failing to mount a rushing attack in its first two games, Auburn rushed 26 times for 215 yards on the way to a 20-12 halftime lead. Bigsby made 106 yards on 11 first-half tries, mostly between the tackles. He finished with 146 yards on 20 carries.

Whether or not Auburn coach Gus Malzahn took away play calling duties from former Arkansas coach and now-Auburn offensive coordinator Chad Morris is debatable, but it was clear that the focus of the offense was different.

Auburn got the lead on a blocked punt recovered in the end zone. Jordyn Peters raced through the Arkansas right flank (between Mataio Soli and Simeon Blair) and dove in front of George Caratan’s leg for a clean block. Barton Lester recovered for a touchdown to make it 7-0 with 4:32 left in the first quarter.

The Hogs were as sloppy as the field in special teams throughout the first half. They were assessed the penalties for not enough men on the line of scrimmage on punts, and Caratan — the holder — muffed a decent snap on the extra point following Arkansas’ first touchdown.

The Tigers led by 17-0 when they drove 80 yards in 10 plays, punishing a collection of reserves when Pool and Jerry Jacobs were helped off the field on the same play. Nix kept for the final 15 yards. Things looked grim for the Hogs with 9:22 left in the half.

But that’s when UA offensive coordinator Kendal Briles came up with his best two possessions in the first three games. The Hogs drove 65 yards on eight plays, then 75 in six plays. Franks completed eight straight passes in the two marches that accounted for 140 of their 203 yards in the half.

The Hogs faced only two third downs in those scoring drives. Franks converted third-and-goal with a 5-yard pass to Mike Woods for the first touchdown with 6:24 left in the half. Franks hit Warren for the final seven yards to end the second scoring drive.

A key to the scoring drives was the insertion of senior Ty Clary at right guard. Clary came into the game in the second quarter it appeared starter Beaux Limmer left with an injury. Clary was terrific.

The Briles call sheet began to click when Franks took turns handing it or dumping it to running back Trelon Smith, a Fred Talley lookalike. Undersized but able to make quick cuts, Smith carried 21 times for 81 yards and added six catches for 78 yards.

Franks completed 22 of 30 passes for 318 yards. The 6-6, 238-pound quarterback also ran 15 times for 28 yards. There were three sacks, but also several called runs and five scrambles.

Franks found Smith for the third UA touchdown, on a 5-yard dump to the right after the Hogs put three receivers wide to the right. Smith was quicker than Auburn linebacker Zakoby McLain on several big plays on the 13-play, 85-yard drive.

The Hogs had a chance to pull even after the touchdown pass to Smith, but a two-point pass was thrown out of the end zone to leave it 20-18 with 4:14 left in the third quarter.

The Tigers rolled to a 27-18 lead when Nix beat a UA blitz with a 17-yard pass to Anthony Swartz. Safeties Blair and Jalen Catalon could not close on the sprinter on the first play of the fourth quarter.

The Hogs took the lead with two magnificent drives sandwiched around on a three-and-out by the defense. It was the best road fourth quarter in three years.

A.J. Reed converted a 22-yard field goal after reserve quarterback Malik Hornsby was stuffed on two called runs on the goal line. The go-ahead drive was 10 plays for 70 yards and featured a Franks run on third-and-7 and a pass to Mike Woods for 11 yards on fourth-and-7.

Warren beat Auburn’s best corner, Christian Tutt, on a go route and Reed converted the extra point to make it 28-27.

At that point, it seemed the special teams problems might be behind the Hogs. Pittman knows there are lots to fix in that area.

Reminded it was the second blocked punt of the season, Pittman said, “People are going to try to block every punt. We gave up seven points there. And, then we punted the ball out of bounds and the penalty (for illegal formation).”

The coach said officials said “we weren’t moved up on the line several times. We tried to correct it. We have to make sure they move up.” He later said the Hogs have to “get better” on special teams.

There are lots of positives. Franks competed like a champion on a day not fit for football. The remnants of Hurricane Delta hit the Auburn area about one hour before kickoff and there was intermittent rain and heavy winds for most of the game.

“He played tough,” Pittman said. “He ran the ball well and got some much-needed yardage. He threw it well. He played tough. He got hit a few times in the run. He got sacked a few times. He just gets better every week. I was really proud of him. I know he was banged up a little bit. It’d be hard to not be proud of his performance tonight. He did a nice job.”

Auburn led in total yards, 446 to 433. The blocked punt was the only field position break despite the wet ball and field. There were no turnovers.

Pittman said the wet conditions might have had something to do with the special teams mistakes and at least one of the two missed two-point conversions.

“We practiced with a wet ball and we showed our team (the Razorbacks’ live mascot in the mud),” he said. “But we didn’t execute (in special teams). The (wet conditions) might have had something to do with the muffed snap on a botched extra point try.”

Malzahn pointed out the Tigers were also without several stars, but praised the Arkansas effort and coaching.

“We got off to a 17-0 lead. Give them credit,” Malzahn said. “They fought back and matter of fact took the lead in the fourth quarter. It was extremely tough — emotional highs — for our team to fight back the way we want, the defense.

“Our guys stepped up and found a way to win. Give Arkansas credit. They played with great effort and I thought they did a super job coaching, too. We’re very happy to have this victory.”