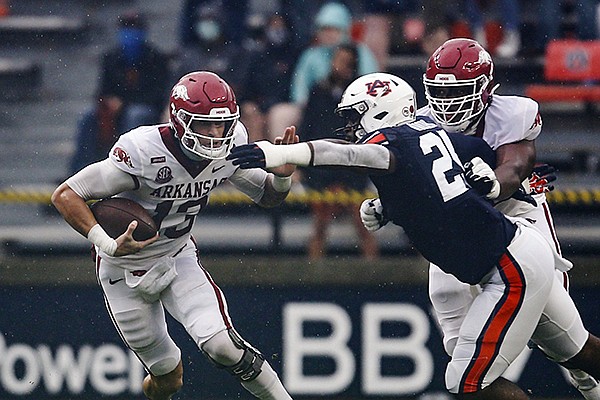 It seems all that stood between Arkansas and a second consecutive SEC road victory Saturday was a quick-whistled officiating crew.

Had referee Jason Autrey not blown the play dead after Bo Nix’s lateral pass in the final minute, Arkansas almost certainly would have recovered and been able to run out the clock. Razorback safety Joe Foucha recovered the ball after the whistles blew. Foucha, defensive end Zach Williams and linebacker Grant Morgan immediately realized the fumble (and initial lack of a whistle) and broke for the ball.

Autrey appeared to have committed two cardinal mistakes in officiating: he blew a play dead when players from both teams obviously realized it wasn’t, and assumed Nix’s spike was routine even though everything about the play screamed abnormal.

If there was ever a time to let the play continue and let replay sort things out, this was it. But the ability to do so was muddied when the whistle blew.

Arkansas is 1-2 when it should be 2-1. What the record can’t shake is the unmistakable confidence gained by the team under first-year coach Sam Pittman and his staff.

Auburn opened the week as an 18-point favorite, but that line seemed too high for anyone who had watched the Razorbacks or the Tigers through two weeks.

This is not a typical Auburn team under Gus Malzahn, and this is not the same old Arkansas team that looked lost in most every SEC game it played for two years under Chad Morris.

With another hard-fought performance — that came with multiple starters sitting out, and others playing through injuries — the Razorbacks served notice they are capable of playing with just about anyone in the league.

With seven games to go, it’s time to reassess the outlook for Arkansas’ season. The Razorbacks can compete with any team in the SEC, and might be able to beat some thought to be unbeatable in the preseason forecasts.

Arkansas should have defeated Auburn on Saturday, and although the Tigers’ ranking would suggest otherwise, it wouldn’t have been an upset. The Razorbacks are just as good of a team, if not better.

The Razorbacks sputtered their way through their first four possessions against the Tigers, including three possessions that did not include a first down. At that point Briles had coordinated 34 Arkansas possessions that ended this way:

Briles appeared to find his groove calling plays in the second quarter. Beginning with the eight-play, 65-yard drive that resulted in Feleipe Franks’ 4-yard touchdown pass to Mike Woods, the Razorbacks scored on five of six possessions. The only time Arkansas didn’t score in that stretch was when the first half expired and the Razorbacks had the ball.

That stretch coincided with when Ty Clary entered the game as Arkansas’ right guard for an apparently injured Beaux Limmer.

Receivers Woods (6 catches, 81 yards, 1 touchdown) and De’Vion Warren (5 catches, 65 yards, 2 touchdowns) and running back Trelon Smith (159 all-purpose yards, 1 touchdown) were good in the absence of the Razorbacks’ best receiver, Treylon Burks, and best rusher, Rakeem Boyd. Arkansas also got a productive game from tight end Blake Kern, who had 59 yards on four receptions, including 35 yards on a wheel route.

Whenever Boyd and Burks return, the Arkansas offense should provide Briles with plenty of play-calling options.

Briles seemed to finally settle in against a good defense. Auburn defensive coordinator Kevin Steele was prepared for the Razorbacks in the beginning, but Briles and staff made adjustments the Tigers couldn’t seem to contain during the course of the game.

Arkansas was the only team that could stop its offense by the end. The Razorbacks played conservative, not-to-win football with under three minutes to go and were burned for it. One pass from Franks might have saved Auburn a timeout, but it might have ended the game, too.

An entire game of aggressive play calling will be needed against an Ole Miss team that is scoring 42 points per game. The Rebels are giving up 52, and with the Razorbacks taking a step forward Saturday, their best performance should await them back home in Fayetteville next week.

• Smith was responsible for nine of the Razorbacks’ 22 first downs, including five on one drive in the third quarter.

Arkansas also converted a third-and-8 early in the fourth quarter with a nifty shuffle pass from Franks to Smith that covered 14 yards.

Smith was the team’s leading rusher with 81 yards, tied for the team lead with six receptions, and was second with 78 receiving yards.

• One concept from Briles playbook could use a cooling-off period.

The tendency to pull Franks out of the game near the goal line and replace him with an inexperienced quarterback is head scratching. It hasn’t worked yet.

At Mississippi State, KJ Jefferson ran for a yard on third-and-goal from the 3 and lost a fumble on the ensuing fourth down. At Auburn, Malik Hornsby had a net total of minus-1 yard on called second- and third-down quarterback keepers to the outside.

The Razorbacks settled for a field goal at Auburn.

On both occasions Franks was pulled to the sideline after successfully leading the drive to that point.

There are surely more wrinkles for plays involving the backup quarterback — as well as TJ Hammonds, whose three touches this year have gone for losses of 14, 5 and 8 yards — but to this point the play calling has been fairly predictable when they are on the field. And their presence momentarily disrupted the flow of a thriving offense.

• In the minutes before Franks fired back-to-back strikes to put the Razorbacks ahead with under six minutes to play, he was having trouble getting off a pass at all.

Franks was forced to scramble on four consecutive called pass plays. The streak was broken with an Auburn offside penalty that resulted in a free play and downfield shot on a short drop from Franks, but he was unable to get a fifth pass off on his next drop back.

It appeared all five plays broke down due to good Auburn coverage.

The Tigers covered the Razorbacks’ fourth-down conversion well, but Franks made a strong pass to Woods in traffic. On the next play Warren got behind Auburn’s secondary and Franks put another throw on the mark.

It was the best game of the season for the transfer quarterback.

• While Briles' offense took a step forward as a coordinator Saturday, the verdict is still out on the special teams unit coordinated by Scott Fountain, which played poorly for the second time in three games.

The Razorbacks had a punt blocked for an Auburn touchdown, committed four alignment penalties and bobbled a snap on an extra point in the second quarter that resulted in the team chasing points the rest of the game.

It was reminiscent of the Georgia game two weeks ago when the Bulldogs blocked a punt, had two big kickoff returns and won the field-position battle for four quarters.

Pittman explained some of the issues as Georgia having quicker, stronger athletes on special teams, which made it difficult to get off blocks. But he said special teams had to improve.

And while it appeared they might put the mistakes behind them at Mississippi State a week ago, it is an increasingly concerning area for the Razorbacks, especially in close games.

Auburn’s game-winning drive began from the Arkansas 45 after George Caratan had a net punt of 28 yards, and an additional five yards were tacked on due to an illegal formation penalty.

• Arkansas nearly pulled off what would have been believed to be its third-largest comeback against an SEC team. Comebacks are not an official record.

The Razorbacks trailed the Tigers by 17 in the first half and led 28-27 in the fourth quarter.

Had the score held, it would have been Arkansas’ biggest comeback since the 2017 Ole Miss game, when the Razorbacks came back from a school-record deficit of 24 points.

The only other SEC games with such a comeback were at Alabama in 2003, when Arkansas won 34-31 in double overtime after trailing by 21 points in regulation, and at Ole Miss in 2011, when the Razorbacks won 29-24 after trailing 17-0.

Arkansas came back from an 18-point halftime deficit against Texas A&M in 2011, but that was a nonconference matchup. The Aggies didn’t join the SEC until the following year.

• The Tigers won, but the Razorbacks outscored them 16-10 after halftime.

That is notable because Arkansas had never outscored a Malzahn-coached team in the second half.

In the seven previous meetings against Malzahn’s Tigers, the Razorbacks had been outscored by at least a touchdown after halftime, and by an average of 17.4 points in the second half.

The third and fourth quarters were when Auburn did its damage in the previous four games it won by margins of 53, 32, 31 and 41 points. The Tigers outscored the Razorbacks in the second half of those games by 28, 21, 14 and 24.

• This game will be remembered for the backward spike, but an equally puzzling review earlier in the fourth quarter played a role.

Auburn running back Tank Bigsby was ruled to have fumbled and the Razorbacks recovered near the red zone. The call was overturned despite the fact there did not appear to be the needed indisputable video evidence that Bigsby was down by contact.

The Tigers wound up punting and the Razorbacks scored on the ensuing possession to go ahead 28-27, but an Arkansas recovery in that scenario would likely have drastically altered how the quarter played out.