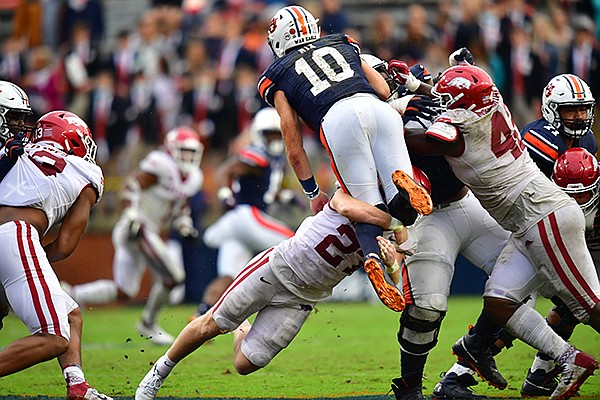 The only way the Arkansas Razorbacks could have started slower Saturday against Auburn would have been to run backward.

After five possessions, they trailed 17-0 and looked like last week’s great effort for a long-awaited SEC victory might be the season’s highlight.

But the Sam Pittman version of the Razorbacks never quits.

They fought back for a 28-27 lead under the leadership of Feleipe Franks and a defense that bent but didn’t break. The Razorbacks outscored the Tigers 28-13 in the final 39 minutes and appeared to have beaten the No. 13 team in the nation.

With 28 seconds to play, Auburn quarterback Bo Nix fumbled the snap, picked up the ball, and threw it down behind him and away from the line of scrimmage.

His intention was to stop the clock for a game-winning field goal attempt.

But Pittman and probably more than half of those watching were yelling it was a fumble because he “spiked” it backward.

After a long review, the officials called intentional grounding and gave the ball to the home team, which hit a 39-yard field goal on the next play to escape.

It had to be a hard pill to swallow for the Razorbacks and coaches, but the Razorbacks never quit. Arkansas was good enough to win, and probably would have if not for the officials.

Their refusal to lose allowed Franks to hit De’Vion Warren with a 30-yard touchdown pass to cap a 70-yard drive with 5:29 to play for a 28-27 lead.

But that’s a lot of time for a Gus Malzahn-coached team, especially with the officials making generous calls.

Nix gave the Tigers a 27-18 lead on the first play of the fourth quarter with a touchdown pass to Anthony Schwartz.

Arkansas took a deep breath and made it 27-21 with 11:37 to play, proving once again the resilience of this team.

The Hogs’ first drive of the second half was almost all Trelon Smith, who rushed for 29 yards, then showed off his versatility by catching 3 passes that totaled 40 yards, thanks to his ability to get yards after the catch.

Franks found Smith on a third and goal from the 5 for the Razorbacks’ third touchdown.

When Auburn went up 17-0 with 9:22 to play in the second quarter, it was obvious Arkansas had not gotten last week’s win over Mississippi State out of its system.

When the Hogs woke up, they showed they can play with just about anyone in the SEC. It was like an alarm clock went off, and Franks was ready for the challenge.

The graduate transfer from Florida completed all four of his passes as the Razorbacks drove 65 yards in eight plays with Mike Woods getting the touchdown on a 4-yard toss from Franks. Kicker A.J. Reed slipped on the wet grass and missed the extra point.

That was a bad omen for the Hogs, who would twice try to catch up with two-point conversions that failed.

On Arkansas’ second touchdown, Franks passed for 73 of the 75 yards and Warren scored the touchdown on a 7-yard reception. Auburn came back with a field goal for a 20-12 halftime lead.

The Razorbacks struggled on the ground, especially in the first half, but Franks passed for 148 yards and two touchdowns to keep it respectable in the opening half.

The final analysis says that once the Hogs got going, Auburn couldn’t slow or stop them.

In the final seconds, the officials made the difference — not the players nor coaches — and that’s not ever supposed to happen.