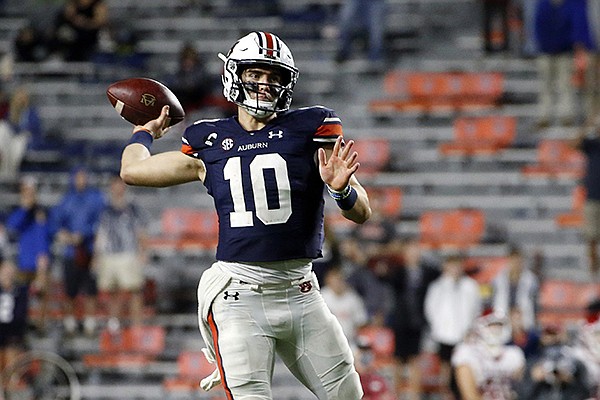 Chad Morris finally was part of an SEC victory involving the University of Arkansas.

Unfortunately for the Razorbacks, Morris called plays for Auburn’s game-winning drive that resulted in Anders Carlson’s 39-yard field goal with seven seconds left that lifted the No. 13 Tigers to a 30-28 victory over Arkansas on Saturday at Jordan-Hare Stadium.

Morris, who was 0-14 in SEC games as Arkansas’ head coach the previous two seasons and had a 4-18 overall record with the Razorbacks, is now Auburn’s offensive coordinator.

“It was personal for us,” Tigers sophomore quarterback Bo Nix said of winning for Morris against the program that fired him with two games left last season. “He’s on our team now, so with the way things went down and the way the situation was, when he came in here, obviously he’d had this one circled for a while.

“We’re just really excited we got the win for him, and I know he’s extremely relieved.”

On fourth and 10, Carlson – who has hit 38 of 56 career field goal attempts for the Tigers – missed a 34-yarder as Arkansas kept the lead.

But the Tigers got the ball back and moved 29 yards in seven plays to the Arkansas 22, where Carlson got another chance and didn’t miss.

“He’s a great kicker, one of the best kickers in the country,” Auburn Coach Gus Malzhan said. “You know, he was looking forward to that. You could see it in his eyes.

“We did a good job with the snap and the hold. It started to rain a little bit there, and our protection held up. Game-winning kick, at home in the SEC, it doesn’t get much better than that as a kicker.”

Nix, who completed 17 of 28 passes for 187 yards, said Morris was calm calling plays, especially after the Razorbaks took the lead.

“With his coaching experience, it really helped on those last two drives,” Nix said. “Both drives we got into field range pretty quickly, so he was able to get us in the right spots.

“He knew what play he wanted to call, and he went with it. I’m extremely, extremely fired up that he’s on my team.

“He’s super competitive. I’ve said from day one he loves winning as much as I do. That’s all you can ask for from your coach.”

Auburn freshman running back Tank Bigsby, who rushed 20 times for 146 yards and caught 4 passes for 16 yards, said he was glad Morris was calling plays with the game on the line.

“You know you can trust him at a moment like that,” Bigsby said. “We knew he’d get us down there.”

Bigsby said he didn’t talk to Morris about the significance of the victory to him personally.

“But I feel like it meant a lot to him,” Bigsby said. “From what he showed, I feel like he felt really good about it.”