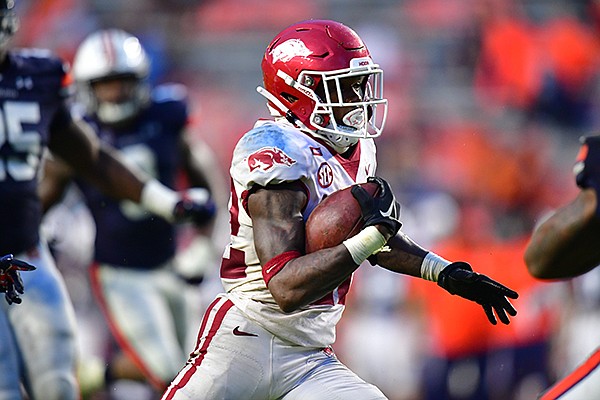 All the praise University of Arkansas running back Trelon Smith received from coaches and teammates last season when he redshirted and in preseason practice this year wasn’t just talk.

Smith is the real deal as he showed Saturday when the Razorbacks pushed No. 13 Auburn to the limit before the Tigers won 30-28 on a last-second field goal by Anders Carlson.

“Me personally, I feel like I stepped up to the plate,” said Smith, who filled in for injured starter Rakeem Boyd, who didn’t travel to Auburn. “I felt like I did what I was supposed to do in the run game, pass-blocking game and also the passing game.”

Smith, a sophomore who redshirted last season after transferring from Arizona State, got his first start with the Razorbacks and led them with 21 carries for 81 yards and had 6 receptions for 78 yards, including a 5-yard touchdown catch from Feleipe Franks.

“I feel like I did a good job across the whole board and moving forward toward the next game,” Smith said. “I just plan on just staying neutral, steady working and just getting the job done when my number is called.”

“He practices that way,” Pittman said on his postgame radio show. “We knew he’d have a good game. Just practices his tail off.”

Peters does it again

Auburn senior defensive back Jordyn Peters once again blocked a punt to help the Tigers score a touchdown against Arkansas.

Peters blocked George Caratan’s punt in the end zone and the ball was recovered by Barton Lester to give the Tigers a 7-0 lead with 4:32 left in the first quarter.

When Auburn beat Arkansas 34-3 in 2018, Peters blocked a punt by Reid Bauer that gave the Tigers possession at the Razorbacks 9 and set up a 4-yard touchdown run by quarterback Phillip Stidham that put Auburn ahead 17-0 in the second quarter.

Arkansas has started the same offensive line for all three games, but there were some changes Saturday after the game started.

On the game’s first snap, right tackle Noah Gatlin went down with an apparent right leg injury. He was helped off the field and didn’t play again, but stayed on the sideline.

In the second quarter, Ty Clary, a starter a center the previous two seasons, went to right guard for Beaux Limmer. Clary played the rest of the game and was on the field for all four of Arkansas’ touchdown drives.

Not sweet 16 for Hogs

The Razorbacks faced one of their former head coaches for the 16th time since 1999 with Chad Morris now serving as Auburn’s offensive coordinator after having a 4-18 record with the Razorbacks the previous two seasons.

Arkansas is 10-6 against its former head coaches in that span, including 4-2 against Lou Holtz (South Carolina), 3-1 against Joe Kines (Alabama), 2-2 against Houston Nutt (Ole Miss) and 1-0 against Jack Crowe (Jacksonville, Ala., State) in addition to being 0-1 against Morris.

Arkansas’ offense found the end zone at Jordan-Hare Stadium for the first time since the 2014 season opener when Feleipe Franks hit Michael Woods with a 4-yard touchdown pass with 6:24 left in the second quarter.

It was the Razorbacks’ first touchdown at Auburn since Jonathan Williams scored on a 6-yard run with 4:28 left in the second quarter of the Tigers’ 45-21 victory on Aug. 30, 2014.

Williams’ touchdown in 2014 tied the score 21-21 before the Tigers pulled away to win.

It was the second career start for Warren, who started this season’s opener against Georgia.

Arkansas junior safety Joe Foucha, who had two interceptions off the bench at Mississippi State and was co-SEC defensive player of the week along with UA linebacker Bumper Pool, made his first start of the season.

Arkansas sophomore defensive tackle Isaiah Nichols was back in the lineup with a four-man defensive line after playing off the bench last week when the Razorbacks went with a three-man defensive front.

Auburn won its fifth consecutive game against Arkansas – the longest streak for either team in the series – and improved to 18-11-1 in the series.

The Razorbacks’ longest winning streak in the series in two games, which they have done four times, most recently in 2011-12.