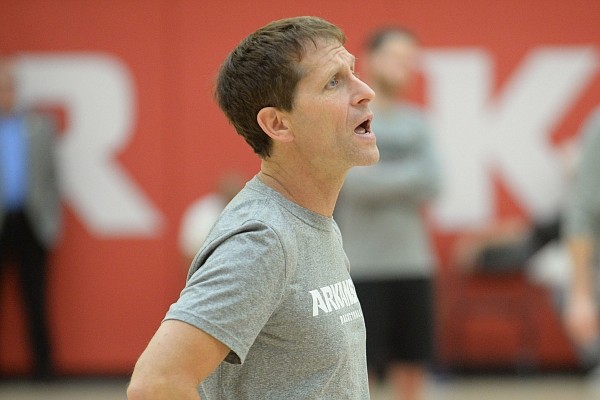 Arkansas coach Eric Musselman directs his players Thursday, Sept. 26, 2019, during practice in the Eddie Sutton Gymnasium inside the Basketball Performance Center in Fayetteville. Visit nwadg.com/photos to see more photographs from the practice.

Here is a rundown of what Arkansas coach Eric Musselman said during his Zoom interview Wednesday looking ahead to his second season with the Razorbacks:

• Musselman was amped up to officially get the preseason underway. He was asked to make a brief opening statement, and he just said, "We’re excited that it’s the opening day of practice."

• JD Notae, who sat out the 2019-20 season due to NCAA transfer rules after coming in from Jacksonville, injured his wrist/hand a couple of months ago, but he has looked very good in workouts since being cleared. Musselman noted that he looked "better than 100 percent" on Tuesday and knocked down 5 of 6 attempts from 3. That's obviously good news for the Razorbacks.

• Asked how the team has meshed to this point considering how many new faces are on the roster, Musselman said the team is evolving and growing on both sides of the ball. He is constantly mixing and matching various lineups, and he added that he sometimes feels like a hockey coach looking at all the different combinations he can use. He is thrilled he can now work with the players up to 20 hours per week.

• There is a lot more competition in practices this year because of the added bodies on the roster. Some of the main aspects Musselman is trying to hone in on in the coming weeks are style of play offensively and defensively, and what he calls "special teams" after either Arkansas or the opponent are shooting free throws. What type of offense or defensive looks will it give coming out of those situations?

He also mentioned having to figure out rotations and who the go-to player in late-game scenarios will be. Those kinds of things he hopes to get ironed out in the nonconference portion of the schedule. A number of things are very much a work in progress.

• Speaking of the schedule, there was no news in that regard. Musselman has "slept like a baby" while director of basketball operations Anthony Ruta continues to work through a majority of the details there. Ruta was proud of what he put together prior to the climate we're now in, but restructuring the schedule has been "a nightmare" for him and he has had a lot of sleepless nights.

Musselman wants to play as many games as possible. A lot of coaches, he said, love getting work done in practices, but he wants to play the games more than anything else.

"I don’t know how you’re going to judge strength of schedule if people have a different number of games played, so we tried to come up with a geographical plan that will help from a scheduling standpoint," he said. "Quite frankly, we want to try to keep our guys in our own space, so to speak, so that we can play as many games as possible. Maybe that limits our travel non-conference."

• On the freshman class: Jaylin Williams has done a really good job of being easy to play with. He is not a ball-stopper, Musselman said. He is a ball-mover who can make open 3s, and he has rebounded at his position very well.

Moses Moody has done a nice job knocking down open looks he's gotten, he has good size and has been solid around the rim. We can see that in practice highlights the Razorbacks basketball Twitter account has posted. Musselman likes his ability to finish off offensive rebounds.

Musselman raved about Davonte Davis' knack for tracking down loose balls. He can play a couple different positions on the offensive end. Getting a better grasp of the team's various schemes is going to be important for him this preseason.

KK Robinson has flashed with his speed. Musselman just wants all of the freshmen to work on being consistent on a daily basis.

• An area of concern right now in Musselman's eyes is not only who the go-to guy or guys will be late in games, but who can create when plays break down and fall apart. As he said earlier, that is still evolving with each day. He does believe the team will be more balanced offensively, though.

• Some players are picking up new sets and schemes at a faster rate than others, and that is where leadership comes into play at this stage. Desi Sills has been a good buddy coach, Musselman said. Justin Smith is another example. He is not an overly verbal kind of player, but he has probably been the most consistent guy from mid-July until now. He leads by example. Emeka Obuwelu, a walk-on, has stepped up and been able to guide and direct players in drills and other situations as well.

• With Mason Jones and Isaiah Joe now both out of the picture and looking ahead to the upcoming NBA Draft, Musselman said it was very important for Connor Vanover and Notae to have the experience of being around every day in practice last year. It is now vital to bring that to the floor with this group. They understand the terminology, the way the staff wants the team to play and attack practice each day. That has been big for the younger players.

• Asked about the job Sam Pittman has done with the football team through three games, Musselman said he has been very impressed, and that is a result of quality leadership. He said he and his wife, Danyelle, have not missed a minute of the teams' two road games, and they were at the season opener against Georgia. They were not as tuned in last season, he said. The difference in body language among the players struck him, too.

• Smith said he has liked what he's seen from Moody and Tate, and that a lot of guys are bringing a good mix of traits to the floor. He said Robinson is likely the toughest cover for him defensively because of the freshman's quickness and change of direction.

• Vance Jackson is a "shooter shooter," Smith said when asked about the New Mexico grad transfer. He can knock down a variety of shots from all over the floor and is going to help the team tremendously with spacing.

• When Smith entered the transfer portal, he said he wanted a change in the style of play. Arkansas provided that. He was drawn in by the free-flowing, movement-based, five-out offense Musselman had to offer. He does not have one specific position he favors most offensively, and on the other end he feels confident he can defend 1-5 and be flexible.

• Tate said Smith has really stood out to this point in the team's workouts. His jumpshot has come a long way and he is a fan of his athleticism.

• Robinson is a "natural-born scorer," he said, and has a great understanding of how to get to his spots on the floor at an early age, which is important. Robinson knows how to get his shot off, too. Davis, as Musselman noted, does a solid job corralling loose balls. Tate called him "a dog" when it comes to tracking balls down and getting on the offensive and defensive glass.

• Tate said he brings leadership to the floor and is a player who can settle others in and get them their looks. He just wants to do all he can to help Arkansas win games and put teammates in positions to succeed.