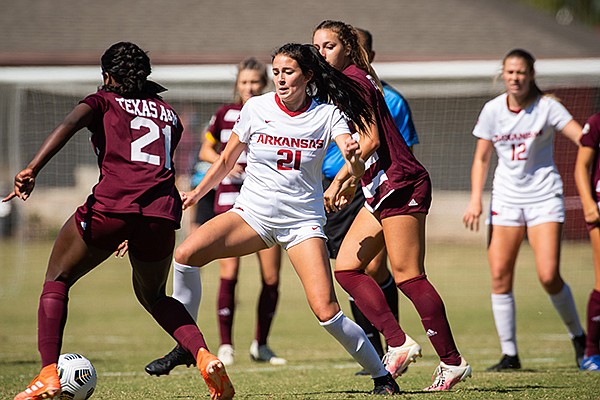 FAYETTEVILLE — Arkansas will open the second half of its soccer season with the SEC’s game of the year Friday in Fayetteville.

The No. 3 Razorbacks (4-0) will host No. 15 South Carolina (3-1) in a matchup between the teams predicted to win the SEC’s two divisions this year. The game is scheduled to start at 7 p.m. on SEC Network-Plus.

Arkansas is the reigning SEC regular-season champion and the Gamecocks defeated the Razorbacks in the championship game of last year’s SEC Tournament.

Arkansas coach Colby Hale said this year’s teams are different than the ones that met twice last year — South Carolina won both meetings by a score of 1-0 — but it should still be a great matchup.

“We’re really excited about this game,” Hale said. “South Carolina is probably the top, most consistent program over the past five years (in the SEC). This is a big challenge for us.

“They lost some key (players), but that’s a program that just kind of reloads. They’re always very mature, their coaches are fantastic, they’re very organized. They play a different style than us and it will be interesting to see who can win that style battle.”

Tankersley, a 5-11 forward who earned SEC freshman of the week honors this week, is one of two freshmen starting this season, along with midfielder Ellie Podojil. Tankersley has scored two goals this year.

“She’s doing a lot of good things and creating chances,” Hale said. “We’re proud of her for stepping into a really mature team and earning her time.”

Tankersley has contributed to several other goals. She had an assist in the season opener against LSU, and her height has obscured the view of the opposing goalkeeper on a couple of corner kick goals, including Kayla McKeon’s in the first half of the Alabama game last weekend.

She said she uses her size to her advantage.

“Up top I feel like I’m a good target and I’m able to hold the ball off,” Tankersley said. “If people run through my I usually get fouls called because I’m super big and it’s hard to push me over.”

Hale said Tankersley fits in well on "a tall team in general."

Tankersley said the team is looking forward to the game against South Carolina. It will be the Razorbacks' quickest turnaround of the year, five days since the Alabama game. Arkansas has had at least seven days between its other games.

“It should be a really good match because it’s a top 15 matchup,” Tankersley said. “I think all of the players are super excited and the fans are excited, too.”