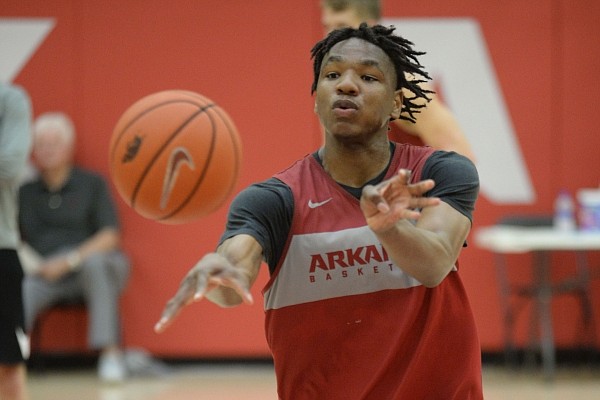 Arkansas guard JD Notae passes to the wing Thursday, Sept. 26, 2019, during practice in the Eddie Sutton Gymnasium inside the Basketball Performance Center in Fayetteville. Visit nwadg.com/photos to see more photographs from the practice.

FAYETTEVILLE — University of Arkansas guard JD Notae, who broke his left wrist in July, is fully recovered for the start of practice, Coach Eric Musselman said.

“JD Notae looked better than a hundred percent yesterday,” Musselman said Wednesday before the Razorbacks opened preseason practice. “He dropped 5 out of 6 from three in live play, and he looked good.”

Notae, a 6-1 junior guard from Jacksonville (Fla.) University, is among 10 newcomers for the Razorbacks this season.

“I think we’re evolving,” Musselman said. “We’re growing on both sides of the ball. I’m not sure what we’ll look like from week to week or day to day. We’re constantly trying to mix and match lineups.

“I feel like a hockey coach at times trying to look at different line play. I think the biggest thing with us is just, like, daily improvement. Trying to get better each day.”

Musselman and his coaching staff, in accordance with NCAA rules, have been able to put their players through workouts since July 20. Players could work for four hours per week to start, then that was increased to eight hours.

Now teams can practice and meet for up to 20 hours a week.

“In the past, it’s been a jump from four hours to 20, and that’s always an adjustment for coaches and players,” Musselman said. “I do like that we went from four to eight, and now to 20.

“So we’re looking forward to having two-hour practices right now, and it’s going to be a grind for the next three weeks. I mean, we are in training camp mode for three weeks right now.

“The guys better be ready to practice.”

Among the newcomers are three transfers who redshirted last season: Notae; 7-3 sophomore Connor Vanover from California; and 6-9 junior Abayomi Iyiola from Stetson. Iyiola tore the anterior cruciate ligament in his right knee in July and isn’t expected to be cleared to play until at least February.

The only returning scholarship players for the Razorbacks are 6-1 junior Desi Sills and 6-8 junior forward Ethan Henderson.

“We’ve used [the workouts] to get to know each other a little bit more and really build team chemistry.”

Musselman said workouts and practices will be more competitive this season because of the Razorbacks’ increased depth. They began last season with nine eligible scholarship players.

“Practices are super competitive,” Tate said. “Nobody ever wants to lose. Nobody every wants to feel like they’re letting their team down, whether it be red or gray.

“These are high-level ballplayers that we’re talking about. I wouldn’t expect it to be any other way.”

Musselman said performances in workouts have been inconsistent.

“Then other days, you know, you would need a football helmet to watch practices because you never know where the ball is going to go, and we’re turning the thing over, and our spacing is bad.

“I think that it depends on when you see us.”

Musselman said his wife, Danyelle, is dealing with his ups and downs when he gets home for dinner.

“Because some nights I’m coming home and thinking we’re doing really well and practice is going smooth,” he said. “And then a few days ago, I mean, I don’t know what she was thinking other than she didn’t want to eat dinner with me because I was in such a bad mood.

“We were clanking shots, and I’m worried, ‘Do we have enough three-point shooting?’

“We put two minutes on the clock and the score is 77-77, and I look up after the two minutes and it’s still 77-77 in our late-game situations. So that’s a struggle we’re trying to work through as well.”