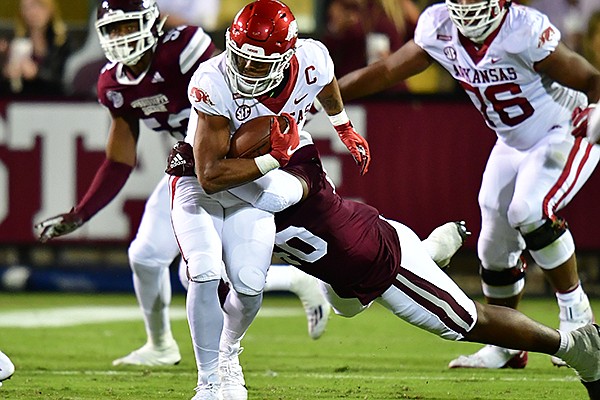 Arkansas running back Rakeem Boyd carries the ball during a game against Mississippi State on Saturday, Oct. 3, 2020, in Fayetteville.

Razorbacks running back Rakeem Boyd, who has not played since suffering a lower-body injury in the first half of Week 2 at Mississippi State, tweeted a brief message and update on his status for Saturday’s game against Ole Miss: “I’m back!”

When Boyd’s post was brought to Arkansas coach Sam Pittman’s attention hours later, he responded in a playful manner.

“Oh, that’s awesome. I’m going to get on there and follow him on Twitter,” he said. “We’ll be extremely happy if he’s able to play. Obviously, he’s a really fine running back and we’d love to have him out there playing. … But I’m glad he’s ready to go.”

Pittman added that he believes the coaching staff made the correct call last week in not playing Boyd against Auburn. He is not sure how effective the senior would have been in the running game.

In one-plus games this season, Boyd has rushed 19 times for 49 yards and caught four passes for eight yards.

Sophomore receiver Treylon Burks is expected to return against the Rebels. Burks injured his knee in the first half of the win at Mississippi State and did not play at Auburn, but he did travel with the team. Pittman said he has practiced all week and should be available.

Cornerback Montaric Brown’s status remains up in the air. Another player who was injured against the Bulldogs, Brown, like Burks, has practiced throughout the week, and Pittman is hopeful he gets cleared for Saturday’s game.

Updates on the status of defensive lineman Dorian Gerald (ankle) and cornerback Jerry Jacobs (foot/ankle) were not provided.

• When asked about the status of this week’s game with Ole Miss, Pittman said he feels optimistic the teams will play. Although he was vague, Rebels coach Lane Kiffin said his team was experiencing covid-19 “issues” Wednesday on the SEC coaches teleconference.

“As of right now, I have no indication that we’re not going to play,” Pittman added.

• In an appearance on SEC Network’s Marty and McGee in the days following the Mississippi State win, Pittman joked that he did not know the whereabouts of the game ball Arkansas athletics director Hunter Yurachek presented to him in the postgame locker room.

“(Staff members) brought it in to me this afternoon,” he said. “I didn't know they were going to tweet out Marty and McGee, but I heard they did. I think I threw them under the bus. I told Marty and McGee I didn't know where the ball was, and I didn’t, so that's why I said it.

“Somebody did a really good job with it. Looks sharp.”

• Pittman said he has a pretty good idea why the Razorbacks started slow on both sides of the ball against Auburn last week: the team was watching the ending of the LSU-Missouri game on the big screen.

He was adamant that he wants to see a greater sense of urgency from his players in pre-game warmups.

“We're sitting there watching it, going through the motions, dropping passes,” Pittman said. “We weren't out there urgently getting ready for the game. I believe everything matters, including stretch and everything. I think it has something to do with the way we started. I think we have to really amp up what our expectations are of warmups.

“When you amp that up, you also amp up the mind. Our mind was on Missouri and LSU it looked to me like. Now, I’m not positive that’s what it was, but I know I was pretty hot after the warmups with trying to get our team focused.”

• Oklahoma transfer linebacker Levi Draper will be out for “some time, quite a while” after undergoing shoulder surgery this week. Pittman noted that the staff understood the injury was serious, but they did not know it would require surgery until 1-2 days before the operation.

“I hate it for him because he worked awful hard and he was doing a good job for us,” he said. “It was a shoulder injury that he had had worked on before. I just hate it for him. He’s a great kid. He’ll be back.”

• Trey Knox, who was unable to come up with catches on a pair of targets at Auburn, has had a good week of practice. One game is not going to define Knox, Pittman said.

“He always practices hard, and he catches the ball,” he added. “I’m proud of him, and he'll come back strong and be a good player for us. I have no doubt that he'll have a good game."