Freshman Wallace stands out in Game 1 of fall series 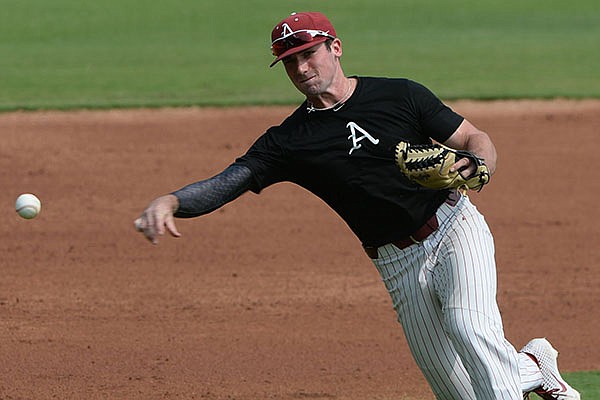 FAYETTEVILLE — Arkansas freshman Cayden Wallace of Greenbrier brought the lumber early and throughout Friday afternoon while reaching base five times in the first game of the Razorbacks’ fall baseball world series.

Wallace blasted a three-run homer in the top of the first, had five RBIs before the second inning ended and finished 3-for-3 with two walks and four runs scored while leading the Black over the Red 15-8 at Baum Walker Stadium.

Wallace, last season’s Gatorade Player of the Year in Arkansas and a top 150 player nationally per Perfect Game, added a two-run double in the top of the second, a walk in the fifth and a single in the sixth and another walk in the seventh.

“I was looking first pitch fastball and I got it,” noted Wallace, who played right field on Friday, but is also a third base candidate. “I was seeing it really good today. It was nice to get an early lead and the team just kept going. It was a fun day for the Black team.”

Moore homered in the bottom of the first as the Red rallied to tie it 3-3 while Gregory’s two-run homer deadlocked it at 5-5 in the third.

“I felt good,” Gregory said. “I felt like I just trusted the process, trusted my approach, got a pitch I could handle and did what I was supposed to do. I knew I got it on the barrel and the wind was kind of flying out today and it wound up going over the fence.”

Gregory doesn’t think it was a matter of the hitters being ahead of the pitchers this fall in a game that was started by Connor Noland (2 2/3 innings, five runs on seven hits with five strikeouts) and Caden Monke (five runs on one hit and three walks).

“I wouldn’t say that we’re necessarily ahead of the pitchers because the pitchers have their days and we have our days,” Gregory said. “Today was just ours. We got a lot of good pitches, drove the ball well.

“I know the pitchers are going to have their day and they are going to come out and get us. That’s just the way baseball goes.”

The world series is being played without fans due to covid-19. It is a best four-of-seven format that will continue Sunday. It gives the players a chance to make one last impression on head coach Dave Van Horn and his staff.

“It’s always competitive out there with the new guys, the (first team) guys,” Gregory said. “Everyone wants to play, everyone wants a spot, but there are only nine spots on the field. We are all brothers here, but we are all competing as well every day to prove they are the guy.”

The defensive play of the day came in the eighth when freshman Ethan Bates hit a three-run double, but was gunned down at third by Webb. The throw was delivered from the right field warning track to third base on the fly.

“Honestly that probably was one of the greatest throws I have ever seen in person in my whole life,” Wallace said. "It was a great throw.”

Cason Tollett had had a pair of hits for the winners while Cullen Smith, Webb, Brady Slavens and Gregory had two hits for the Red squad.

“I think just overall it is going to be fun and I am just excited for the next one,” Wallace said.