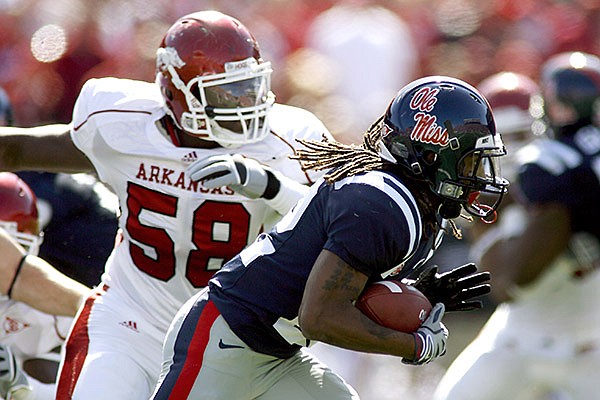 FAYETTEVILLE — The last time the University of Arkansas lost a game rife with officiating controversy much like last week’s heartbreaking 30-28 setback at No. 13 Auburn, they delivered a clunker the following week.

After a series of calls went against them and the officiating crew publicly reprimanded following a 23-20 loss at No. 1 Florida in 2009, the Razorbacks were flat the following week in a 30-17 loss at Ole Miss.

Coach Sam Pittman and his players vow they’ve put to rest the anger and disappointment from the blown call with 30 seconds remaining that denied an Arkansas fumble recovery and allowed Auburn to kick a game-winning field goal.

“One of the best things I have ever been told in my life is control what you can control,” quarterback Feleipe Franks said. “That’s like getting mad that it’s raining outside. You can’t control it, so that’s in the past and we’re focusing on this week.”

Added wideout Mike Woods, “Yeah, we put it to bed on Monday. So we pretty much got straight to Ole Miss.

Pittman described his team’s focus on the Ole Miss game as great.

“Our football team basically reacts like the coaching staff,” he said. “As long as we continue to work hard and talk about the opponent that we’re getting ready to play and not the one we just played, our team has certainly acted like our coaching staff.”

Boyd posted “I’m Back” on his Twitter account, referencing he should be ready to play when the Razorbacks host Ole Miss on Saturday.

Boyd appeared to suffer a right ankle injury in the second quarter of Arkansas’ 21-14 win at Mississippi State two weeks ago and did not travel for last week’s game at Auburn.

“Well, I’ve got to get on Twitter, because he said he’s going to play?” Pittman said. “Oh, that’s awesome. I’m going to get on there and follow him on Twitter.

“We’ll be extremely happy if he’s able to play. Obviously, he’s a really fine running back, and we’d love to have him out there playing.”

Pittman said the Razorbacks did the right thing by holding him out last week because he didn’t know how effective Boyd might have been.

Pittman also said wide receiver Treylon Burks, cornerback Montaric Brown and tight end Hudson Henry, who all missed the Auburn game with injuries, have practiced this week. He expects Burks and Henry to play, and he’s hopeful Brown is cleared to play.

“He’s out for some time, quite a while,” Pittman said. “I hate it for him because he worked awful hard and he was doing a good job for us.

“It was a shoulder injury that he had had worked on before. … We knew it was serious, but we didn’t know if it needed surgery until about a day or two before we decided he probably needs to go ahead and get it done.”

Officials from both Arkansas and Ole Miss indicated that there was no reason on Thursday to think Saturday’s game would be postponed.

Ole Miss Coach Lane Kiffin said Wednesday that the Rebels had a covid-19 outbreak in their program and their numbers weren’t good. Kiffin added Ole Miss could meet the threshold numbers required by the SEC to field a team, including 53 healthy scholarship players.

“As I’m aware, we’re going to play,” Arkansas Coach Sam Pittman said Thursday afternoon. “Obviously there was a test this morning for all SEC teams and we’ll get that result back, usually we test early on Thursday so we’ll get our results back earlier in case you’re on the road and all those things.”

“My wife said it best, I don’t know if last year she sat through a full game watching it on TV,” Musselman said Wednesday. “Like, we have not missed one second of their two games on the road, and the home game, we were at. Cannot wait for Saturday’s game.

“We will be there ready to watch how competitive they are. First half of the home game against Georgia, I sat upstairs in a suite, and the second half I went down in that second or third row right behind their bench. And I’m not a football coach, I don’t know football Xs and Os. But I do know when a team has incredible leadership, and I do know reading body language of players … you could tell by their body language they were competing to the end. Just really impressed with how quickly the players have bought into his system and his culture.”

Ole Miss Coach Lane Kiffin, well known around the country for speaking his mind on different subjects, had a solid opinion on the controversial call and whistle that cost Arkansas a win at Auburn in the final 30 seconds.

“I mean, I’m sure Auburn is counting their blessings,” Kiffin said on Wednesday’s SEC teleconference. “The ball is backward. Knox [Kiffin, his son] knew that when he saw it. It’s really a shame for Arkansas to play that well and should have won the game.”

The backward ball Kiffin referenced was the spike attempt by Auburn quarterback Bo Nix that he threw behind him, which was eventually recovered by Arkansas safety Joe Foucha.

SEC coordinator of officials John McDaid deemed referee Jason Autrey made a mistake by blowing his whistle on the play, but he also said the replay review properly ruled that Foucha’s final recovery came after the “immediate continuous loose-ball action” on the play had ended.

“They ought to be close,” Arkansas Coach Sam Pittman said. “Unless there’s a family feud, they should be good friends.”

Kiffin said the connection for this game isn’t a big deal.

“You know that happens in coaching all the time where you have relatives or people playing with your dad’s team and stuff,” he said. “They aren’t just brothers-in-law, they’re best friends. They grew up best friends, and he ended marrying Kendal’s sister. So I joke with [Lebby] that he was just trying to get a job with Art [Briles]. So they are very close.”

Arkansas linebacker Bumper Pool and safety Jalen Catalon are tied for the team lead with 36 tackles after the redshirt freshman Catalon posted a game-high 14 stops, including 10 solo last week.

Catalon and Pool are tied for second nationally with 12 tackles per game along with Missouri linebacker Nick Bolton and Louisiana-Lafayette linebacker Lorenzo McCaskill. They trail Temple linebacker Isaiah Graham-Mobley, who recorded 14 tackles in the Owls’ lone game.

Arkansas is struggling in one area many thought would be substantially upgraded this season: The kicking game.

The Razorbacks gave up their second blocked punt of the season last week at Auburn, resulting in the first score of the game on Jordyn Peters’ block and Barton Lester’s recovery in the Auburn end zone.

Peters ran by Jonathan Marshall on the three-man shield in front of punter George Caratan and easily snuffed the punt. The block followed an illegal procedure penalty on Mataio Soli that moved the ball from the Arkansas 7 to the 4.

That was one of four penalties on the Razorbacks’ punt team, with the other being illegal formation flags brought on by players not being close enough to the line of scrimmage. The punt team had penalties on four of its five punt plays.

One of the illegal formation calls wiped out a 57-yard Caratan punt to the Auburn 8 in the first quarter. His subsequent punt after the penalty traveled 48 yards to the 17.

Ole Miss running back Jerrion Ealy, the gem in the Rebels’ 2019 signing class, has established himself as one of the SEC’s top playmakers.

“You just got to get better each and every day. That’s what we try to do.”

Ealy plays all over the field, from tailback to the slot, and as a motion man.

“It didn’t take me long to get comfortable with that at all,” he said. “That’s how I see myself. I see myself as someone who’s very versatile that can play many positions on the offensive side of the ball. That’s right up my alley.”

Arkansas leads the series with Ole Miss by the count of 36-27-1 in the Razorbacks’ record books, while Ole Miss lists the series at 35-28-1 in the Hogs’ favor.

This is a series that has a disputed result in 1914, with Arkansas claiming a 1-0 forfeit victory due to an ineligible player, and Ole Miss counting that game as an on-field win.

The ESPN2 broadcast crew assigned to the Ole Miss at Arkansas game will be comprised of Dave Flemming on play by play, Rod Gilmore as color analyst and Tera Talmadge as the sideline reporter. Talmadge, who is with the KNWA-TV sports team, also worked the sideline at the Razorbacks’ first two games this season.