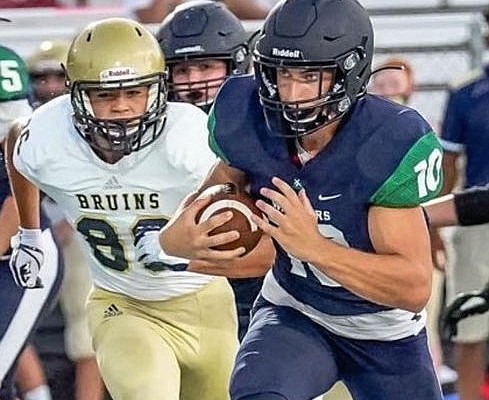 Little Rock Christian freshman quarterback Walker White has all the makings of a top caliber signal caller and recruit.

“The ceiling on him is unbelievable,” Little Rock Christian coach Eric Cohu said. “He’s in the weight room all the time. He’s strong, he’s fast. He’s a student of the game. He’s always wanting to improve.”

In a game against Vilonia, White rushed 12 times for 228 yards, and completed 10 of 17 passes for 176 yards and 5 touchdowns. One of his touchdown passes included a 50-yard completion.

Cohu sees White being a heavily pursued prospect the next few years.

White’s great-grandfather Harold “Greasy” Rees played football for the Razorbacks; his grandfather John Rees played receiver from 1968-70; and his uncle John Aaron Rees played from 2005-2008. His father, David, played golf at Arkansas in the early 1990s.

He dresses out for the Warrior varsity squad as a backup. White and the ninth grade team is 7-0 on the season with victories over Pulaski Academy, Little Rock Parkview, Jacksonville, Searcy and others.

“We look for him to be a very integral part of our future of Little Rock Christian football,” Cohu said. “Not just him, but we have 37 freshmen and there’s a lot of talent in that class. We’re really excited about those guys moving up next year.”