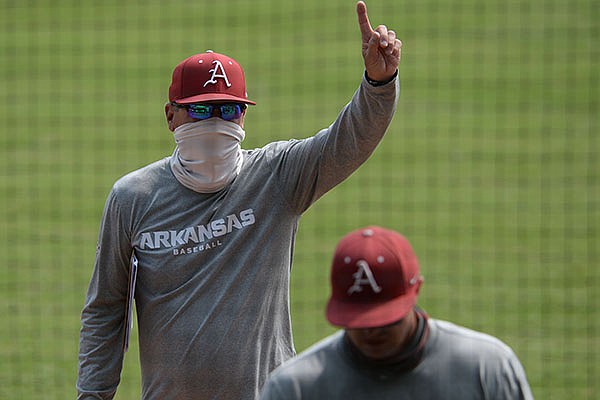 FAYETTEVILLE — Dave Van Horn said this is one of the best fall baseball practices in his 19 years as the University of Arkansas coach.

“I think contributing to that would be the fact that we didn’t play a full season in the spring,” Van Horn said. “The guys are just really into it.”

The college baseball season ended in March due to the coronavirus pandemic. Arkansas finished 11-5 after playing 66 and 62 games the previous two seasons while advancing to the College World Series.

“I just felt like from the players, and really from the coaching staff on down, there’s been a lot of energy. Guys showed up with a great attitude every day. I think they felt very fortunate to be out there on a baseball field.”

Fans won’t be allowed to attend due to coronavirus precautions, but starting Sunday games will be shown on SEC Network-Plus.

“We’ve told the kids that this series is important because there’s still some guys where we’re trying to figure it out a little bit,” Van Horn said. “They need to make a jump and move in front of some people.

“It’s the last time they have a chance to really impress us and show their teammates and their coaches what they can do.”

Catcher Casey Opitz expected to go pro last summer, but when the MLB Draft was shortened to five rounds and he wasn’t selected, he returned to Arkansas with the NCAA restoring eligibility for all spring sport athletes.

“Obviously, Optiz is as good as it gets in the country,” Van Horn said. “He’s a man among boys right now.”

Matt Goodheart could play first base or DH. Other possibilities at first, Van Horn said, include Brady Slavens, Cayden Wallace and Cullen Smith.

“I think we’ll go with the hot hitter,” Van Horn said. “We’ll just see how that plays out.”

Robert Moore could play second base, as he did last season, or move to shortstop with junior college transfer Jalen Battles playing second.

“Robert can play either short, second or third and probably could play some center field,” Van Horn said. “But he’s been working at short all fall because we already know he can play second. Jalen is mostly a shortstop, really tall and lanky, although he can play a really good second.”

Jacob Nesbit is set to start at third base again.

“There’s not a better defensive third baseman in the country than Jacob Nesbitt,” Van Horn said. “The kid is just smooth and accurate.”

“We have interchangeable type guys,” he said.

Christian Franklin is a returning starter in center field.

“Christian Franklin is the real deal,” Van Horn said. “He’s smart and a really good defender. Offensively, he can beat you with an infield hit, but he can also hit a ball 450 feet. That’s a good combination.”

Braydon Webb is back in left field.

“He got off to a slow start last year, but … he ended up hitting around .300 [.340],” Van Horn said. “He got off to another slow start this fall, but he’s been tearing it up lately. He had two home runs in one [scrimmage] and hit another one that would have been out, but the wind was blowing in that day.”

Who plays in right field is wide open. Slavens and Wallace could play there, as well as Zack Gregory or Bryce Matthews.

“I feel like as far as pitching competition, it’s been second to none,” Van Horn said. ‘You’ve got guys that were conference starters two years ago and last year [Noland and Wicklander] that are battling to try to get on the mound and start.

“Which is a good issue, a good problem for us, because it gives us depth and competition amongst teammates probably that can really, really push your team forward.”