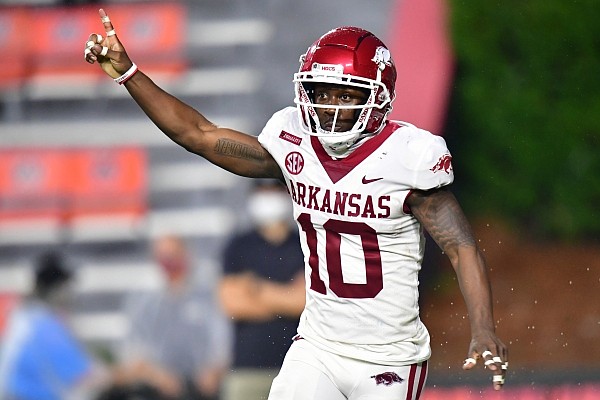 Arkansas receiver De'Vion Warren celebrates after scoring a touchdown at Auburn on Oct. 10, 2020.

FAYETTEVILLE — In the days leading up to a pee-wee football game when he was nine years old, De’Vion Warren was offered a sweet deal from his father.

Lavell Warren laid out the parameters clearly: Play well, maybe even score a touchdown, and you will be the owner of a brand new bike. Challenge accepted.

It’s game day, and De’Vion Warren is eager to take the field, not only to put on a show for his team but also hold up his end of the agreement. But his day did not get off to the greatest of starts.

After taking a hit and falling awkwardly, his wrist began to swell.

A teammate’s father who was a physician’s assistant rushed to his side to assess the injury. It was determined that De’Vion Warren’s wrist could be broken and that he may need to watch the remainder of the game from the sideline. He wasn’t having it.

“De’Vion was like, ‘Mom, let me go. I’m good. I can play,’” Roxy Warren told WholeHogSports.

His team won the game, and he played a key role in the result. Once away from teammates and coaches, De’Vion Warren broke down in the parking lot. He was in pain, tears streaming down his face like nothing his parents had seen before.

Ice was quickly applied to the injury and the family headed toward the nearest emergency room, where X-rays confirmed the initial diagnosis: a fractured wrist. Roxy Warren was in disbelief.

“He played the entire game that injured and that hurt at that age,” she said. “I was like, this child loves this game a lot more than I ever knew. To see that type of selflessness for his team, I kind of knew this is where he wanted to be. I saw it then. It was just amazing for me, that young, to be able to see him do what he does.

“Dee has done some magnificent things over the years in football, but to me that sticks out to be that young, that selfless and love this game that much. He was insistent. He wants to be on that field all the time.”

De’Vion Warren’s team-first attitude and determination are traits he has carried with him throughout his football career. Largely known as a kickoff return specialist in his first three seasons with the Razorbacks, he has shown to be much more than that this fall, and more along the lines of the player who was a three-time all-district selection at Ouachita Parish (La.) High School.

Three games into his senior season, he leads Arkansas in receiving yards and touchdowns, unexpectedly breaking out behind a pair of terrific showings against Mississippi State and Auburn. A speedy, shifty player seldom used in the passing game prior to offensive coordinator Kendal Briles’ arrival, De’Vion Warren has to this point been as reliable as any target available to quarterback Feleipe Franks.

“Man, he’s played well,” Razorbacks coach Sam Pittman said Monday. “He catches the ball, he gets open, has some speed, can make people miss. To think he would be where he is right now when the season started, I’d say, ‘Nah, I don’t know. Hope so!’ But man, he’s playing good.

“He’s got confidence and is doing a heck of a job for us. And we need him to.”

De’Vion Warren found himself frustrated with his role at times early in his career. But he did not contemplate leaving the program.

Instead, he remained patient and leaned on his faith. And that stems from his family.

“My parents had a big influence. Even when times would get bad and I would lose and things weren’t going my way, they always said, ‘See a light at the end of the tunnel,’” De’Vion Warren said. “They are big believers in religion, so they make sure that I always keep God first, and I pray and talk to Him and let God handle any problems that I have.

“I thought about just, ‘Hey, I can prove to (coaches) that I belong in this league.”

And on top of that, be reliable and trustworthy, and be yourself. Those bits of advice are clearly rooted in the senior.

“Everything else will happen when it’s supposed to happen when you do what you’re supposed to do,” Roxy Warren said. “Have faith in a God that you serve that controls any and all things. But you do your job, and He will definitely do His.”

De’Vion Warren’s parents have only missed a couple of his games since he started playing football at a young age. They are usually yelling and screaming in the stands, especially when the ball is in the air and spiraling in his direction.

His father worked with him growing up on “little bitty techniques” that remain with him now with the Razorbacks. Sitting near the Warrens during Arkansas games these days, you’re likely to see their parent-coach and fan sides emerge all at once.

The Ouachita Parish community has been thrilled with De’Vion Warren’s recent success, and the support has blown the family away. Roxy Warren has received plenty of congratulatory-type text messages from the mothers of her son’s former teammates.

A player who had only seven catches and 33 receiving yards to his name prior to 2020, De’Vion Warren has put together back-to-back 90-plus yard performances against SEC competition. He knows better than to do anything other than maintain a level-headed approach.

Being humble is another quality his parents instilled in him.

“When that opportunity comes, make sure you make the most of it because just like it is given, it can be taken away,” Roxy Warren said. “Dee has always been very talented, very athletic. Sports have just come so naturally to him since the day he started. He’s loved it.

“To get an opportunity to get to see him do the things that he absolutely loves to do and then contribute to the team, it’s a joy getting to see your child do the things you know he’s capable of.”