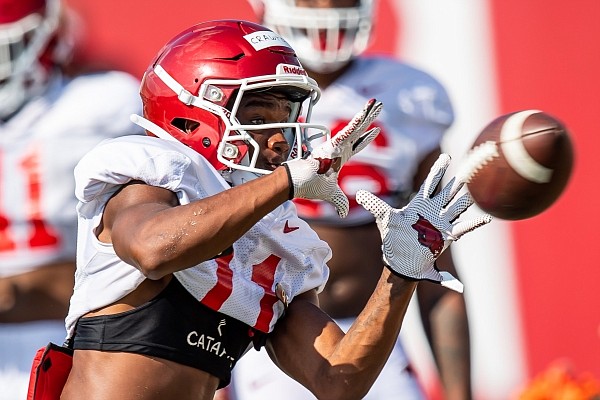 Jaquayln Crawford is practicing with the Razorbacks this season after transferring from Oklahoma.

Fans dreaming about the offensive playmakers Arkansas should have on the field next year should not forget about one who is just biding his time in residency this season.

Former Rockwell, Texas speedster and wide receiver transfer Jaquayln Crawford (5-10, 175 pounds, 4.38) is a Razorback redshirt this season after spending the past two seasons at Oklahoma.

The former ESPN four-star prospect chose the Sooners over Georgia, Arkansas, Auburn, Florida, Tennessee, Notre Dame, Penn State, Texas and Texas A&M among others. He should fit as a slot receiver and kick returner.

“Very dynamic slot,” Pittman said. “A receiver who you go back and watch his tape, he was electric in high school and obviously contacted us. I think we finished second on him two years ago or whatever it was. I like him. He has a great momma. He’s got a lot of speed and I think he’s going to be a dynamic slot for us, I really do. We’re really excited about getting him in here.”

He had 23 touchdowns his senior season for Rockdale head coach Jake Campsey while leading his team to a Class 3A Division I state title in 2017.

“He is so dynamic with the ball in his hands,” Campsey said. “He could do it all. He played quarterback for us, running back and receiver, which is what he really is. And he started on defense. He was in or virtually every play and was the ultimate do it all guy. He was better than everybody at every position he played for us. It was really incredible to watch.”

All of his skills were on display in the 2017 championship game in which Rockdale fell behind 21-0 in the second quarter before rallying to a 45-29 win over Brock at the Dallas Cowboys’ AT&T Stadium.

“He is just such an incredible athlete, but he also has what I call the ‘It’ factor,” Campsey said. “If the ball is in his hands at the end of the game, he is going to win the game for you. He sure did that for us at Rockdale.”

Crawford is practicing with the Razorbacks now and will go on scholarship in Jan. 2021, counting toward that class’ 25 scholarship allotment.

Arkansas has 19 commits besides Crawford in the 2021 class including four wide receivers, two quarterbacks, two running backs and a tight end.

Crawford committed to Oklahoma on March 17, 2017 although he did take a late visit to Arkansas on Dec. 14-16 when new head coach Chad Morris became coach.

Morris and wide receivers coach Justin Stepp had given Crawford his first college offer on April 29, 2016.

“I know Jaqualyn thought so high of Coach Stepp and all of us here kind of built a relationship with him,” Campsey said. “I think he is just an outstanding guy.”

That was something Crawford remembered after he redshirted as a wide receiver at Oklahoma his first season before being moved to defensive back in year two.

Stepp was retained by Pittman and that led to Crawford making it to Fayetteville.

“Coach Justin Stepp was the first coach to offer me in high school and four years later still believed in me more than anyone,” Crawford tweeted. “Can’t wait to get to work for him!”