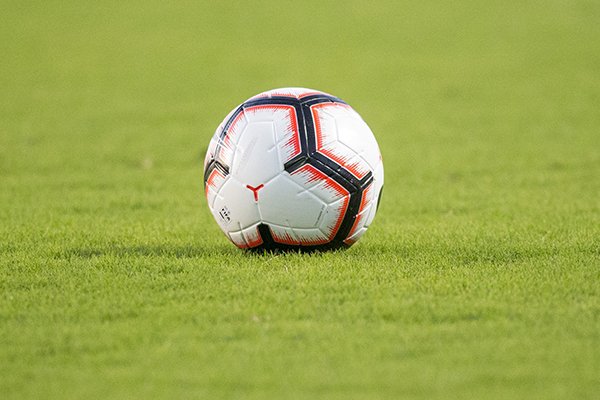 A soccer ball is shown on the field prior to a game between Arkansas and Vanderbilt on Thursday, Sept. 26, 2019, in Fayetteville.

FAYETTEVILLE — South Carolina's Samantha Chang scored a breakaway goal in the 71st minute to give the No. 15 Gamecocks the go-ahead goal in a 2-1 victory over No. 3 Arkansas on Friday at Razorback Field.

The Razorbacks (4-1) lost a regular season game for the first time since a loss to South Carolina last September, a regular-season unbeaten streak of 11 games. The Gamecocks (4-1) defeated Arkansas for the third time in the past two seasons.

Arkansas also had an 11-game unbeaten streak snapped on its home field.

The Razorbacks out-shot the Gamecocks 14-8 and 7-6 on goal, but South Carolina's Heather Hinz made six saves, including a diving stop on a good look by Arkansas' Anna Podojil early in the second half.

Podojil tied the game at 1-1 minutes later after she intercepted a pass while the Gamecocks were trying to clear in front of their net. It was Podojil's third goal of the season.

South Carolina took a 1-0 lead on Corinna Zulo's header in the 37th minute.

Arkansas and South Carolina were picked to finish atop the SEC standings in the preseason and their game was a rematch of last year's SEC Tournament championship game the Gamecocks won 1-0.

The Razorbacks are scheduled to play again at Ole Miss next Sunday at 3 p.m.